Legislative Update: Heart of the City 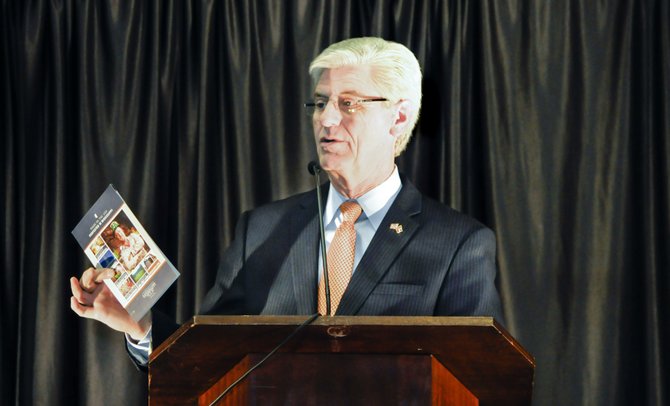 Gov. Phil Bryant wants the premiere of “Get on Up,” the James Brown biopic that recently wrapped up filming in Jackson, to take place in the capital city. Photo by Trip Burns.

On Jan. 22, Gov. Phil Bryant used a word that is not a regular part of his vocabulary—Jackson.

Tate Taylor, a capital-city native and director who recently wrapped up shooting a film about the life of James Brown in Jackson, opened the meeting discussing the economic benefit on the capital city.

Taylor, who also directed the "The Help," parts of which were also filmed in Jackson, said "Get on Up" spent $27 million filming in Mississippi, and that half of that sum went to Jackson.

Bryant said he was lobbying Taylor to hold the premiere of "Get on Up," scheduled for Aug.1, in Jackson instead of Hollywood (never mind that Jackson does not have a movie theater.).

The movie industry may get an even bigger boost from pending legislation that would provide tax incentives to film studios that locate in Mississippi. The Clarion-Ledger reported this week that mega-producer Adam Rosenfelt wants to open a movie studio in Jackson.

Bryant's remarks also marked somewhat of a departure from going out of his way to avoid talking about Jackson. He touted development of the health-care corridor, the possible construction of a new, expanded University of Mississippi School of Medical school, as well as progress on the proposed One Lake economic-development and flood project, which he called a "game changer."

Under the leadership of Mayor Chokwe Lumumba, Jackson has put forth an aggressive legislative agenda and, between the state House and Senate, the capital city's mostly Democratic delegation has filed nine bills.

Rep. Earle Banks submitted several bills on the city's behalf, including one that would allocate a portion of the state fuel tax to the city "to defray costs incurred as a result of being the seat of state government" and another to add parts of certain roads in the city limits to the state highway system. Rep. Credell Calhoun proposed issuing $1.5 million in bonds to repair the Woodrow Wilson Avenue Bridge.

On the Senate side, a bill from Sen. John Horhn would require payments in lieu of taxes on state-owned property located in the city, also designed to help offset the costs the city incur from the presence of state government.

Several speakers at the chamber luncheon talked about the importance of fixing Jackson's aging infrastructure.

"Jackson is the core, and it needs to be healthy," Greater Jackson Chamber Partnership President and CEO Duane O'Neill said.

Despite coming up short during the last legislative session, Jackson State University is still confident it can convince the state to help pay for the cost of what it calls a 50,000-seat domed venue.

Vivian Fuller, the athletic director for Jackson State University, says the plans are "not dead, yet," but said that she realizes the school has an uphill climb to find the $200 million it will cost to construct the sports and entertainment complex.

The biggest obstacle facing the project remains its funding.

State Rep. Alyce Clarke, D-Jackson, has introduced legislation to authorize $75 million in bonds for Jackson State. The House Ways and Means and University and Colleges committees will consider Clarke's House Bill 355. Plans for the project show that the stadium is designed for football, basketball, concerts and special events.

Craft brewers, the Mississippi Legislature's favorite lobbying group in recent years, might be coming back for a yet another push to open up the state's beer culture even more.

After a short informal hearing, Sen. Philip Moran, R-Kiln, introduced legislation that would authorize small brewers to sell a limited amount of beer.

In recent years, the Legislature has acted to lift the alcohol-content limit for beer sold in the state and legalized home brewing.

Now that so much good beer is being made in Mississippi, people want to visit their favorite brewery and buy a six-pack to take home, but state law currently prohibits the practice.

Although it might appear that brewery sales would represent competition to retail outlets and restaurants, craft-beer advocates like John Neal of the Keg and Barrel in Hattiesburg, believes that a rising beer tide would lift all boats.

Despite our state's progress, it may be a long time before that tide comes in. A 2013 analysis from the Brewers Association, the trade group for the craft-beer industry, shows that the average wage of a brewery worker in Mississippi was $26,690 in 2012, the lowest among states. And while Mississippi breweries pumped $149.5 million into the state's economy, that sums lags all states. By comparison, California's breweries made a total of economic impact of $4.6 billion.

Currently, 46 states permit brewers to sell small quantities of their products on site, which puts Mississippi at a competitive disadvantage, Neal said.

"We need a strong brewing industry in Mississippi," said John Neal, he added.

The Mississippi Immigrant Rights Alliance and other groups fighting for immigrant and workers rights want to extend in-state college tuition rates to Mississippi's "dreamers," those raised and educated in the state's public schools but are not citizens.

Under current law, even if an undocumented immigrant graduates from high school in a Mississippi school, he or she must pay out-of-state tuition to attend a state college or university. House Bill 209, sponsored by Rep. Reecy L. Dickson, D-Macon, hopes to rectify that situation.

The bill might face an uphill climb. In a meeting with supporters of Dickson's legislation, which the Jackson Free Press attended, House Colleges and Universities Committee Chair Rep. Nolan Mettetal, R-Sardis, said the Institutions of Higher Learning would see HB 209 as taking away much-needed revenue in an era of shrinking budgets.

When one MIRA member asked Mettetal whether he would personally commit to supporting the legislation for undocumented students, he demurred, saying, "I want all our citizens to benefit as much as possible."