Special Session: Too Little, Too Late? 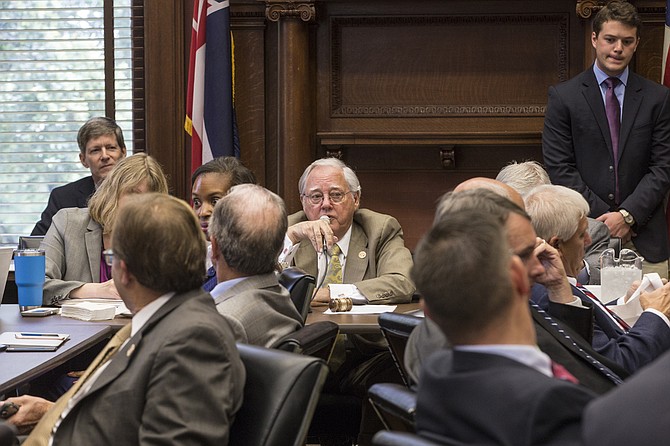 Rep. John Read, R-Gautier, the House Appropriations Committee chairman, told the House that he believes the state’s economy will take a positive turn, and deep tax cuts and breaks will pay off in a few years. Photo by Imani Khayyam.

JACKSON — Gov. Phil Bryant tried to smooth out the state's economic appearance and patch up additional budget holes in the June 5 special session, but Democrats were not too pleased with the way he went about it. Still, at least all state agencies now have a budget for the new fiscal year, which starts in July.

In the one-day session, Bryant sought to improve the State's status in credit rating agencies' eyes by increasing its rainy-day fund cap to 10 percent instead of 7.5 percent, among other small changes, included in his Financial and Operations Responses That Invigorate Future Years Act, called the FORTIFY Act for short.

Most Democrats cried foul at the measure, saying if Republicans really wanted to address the state's shaky credit ratings, they should reconsider or repeal the massive tax cuts of the past six years under Republican control of the Legislature.

In 2016, the Republican supermajority led the Legislature in passing the Taxpayer Pay Raise Act, which Lt. Gov. Tate Reeves praised as the largest tax cut in Mississippi history. The tax cut will divert $415 million from the State of Mississippi's general fund over the course of several years, and it goes into effect July 1.

Senate Democrats offered an amendment that brought forward tax-code sections in an attempt to fix the state's lagging revenues. Senators did not vote on the amendment after Sen. Chris McDaniel, R-Ellisville, raised a point of order.

Reeves ruled the amendment "not germane" to the legislation because it dealt with a different part of state law.

Sen. David Blount read from one of the credit-rating reports to make his point that revenue matters. "'(It is) our expectation that Mississippi could continue to experience budget pressures as it manages through budget reductions and incremental revenue loss from the scheduled implementation of recent tax changes,'" Blount told the Senate. "That's why a number of us stood and offered the amendment we did; if you're concerned about the long-term budget situation as a state, you've got to look at the revenue side."

The Senate voted to pass the FORTIFY Act, and initially, Sen. Hob Bryan, D-Amory, held the bill on a motion to reconsider potentially bringing lawmakers back for a second day of special session. Gov. Bryant tweeted out his disapproval, blaming Senate Democrats for costing taxpayers another $70,000. Sen. Bryan retracted his motions, however, and the House took up the bill around 7 p.m. Monday night.

State Fiscal Officer Laura Jackson was in the House Appropriations Committee when representatives debated the bill. She said the Department of Finance and Administration knew about the impact of tax cuts on the state's ratings for a while.

"They do mention in the ratings reports the uncertainty of the tax cuts," Jackson told the committee. "We have expressed concerns about the tax cuts and what it will do to the ratings."

The FORTIFY Act got out of the House Appropriations Committee by a vote of 11-7. Democrats lambasted the bill on the floor, pointing to budget cuts that have led to people kicked out of programs funded through Medicaid and the Department of Mental Health.

"I'm not against fortifying, but I am against all of the charades that we're using now to deceive our people that good things aren't going to happen. ... [T]he only cash cow that I see in the next two years to save the state of Mississippi is the BP money," Rep. Steve Holland, D-Plantersville, said, referring to the BP lawsuit settlement funds the Legislature will have to appropriate.

At the special session, lawmakers continued their mop-up of legislation from 2016 that swept several special funds back into the state's general fund. The 88-page Senate Bill 2001 passed with some resistance from Democratic lawmakers.

State agencies will now have to request funding for those programs directly from the Legislature, after lawmakers voted to sweep $9.7 million back into the general fund on Monday.

Senate Appropriations Chairman Sen. Buck Clarke, R-Hollandale, told the Senate the bill has no effect on the fiscal-year 2018 budget that will begin July 1 and that it frees up some of the "trapped" funds, after the Legislature passed Senate Bill 2362 back in 2016.

Democrats pointed out that agencies that previously relied on these funds might get hit even harder as budget cuts begin in the new fiscal year.

"It appears to me that agencies that are most impacted by this bill, specifically the attorney general's office, should receive a smaller cut in the general-fund appropriation than other agencies because they're now having to assume additional responsibilities," Blount said on the Senate floor.

Agencies will still be responsible for administering the special-fund programs, Clarke said, but instead of appropriating the special funds themselves, they will have to ask the Legislature for money.

"All agencies have had to take cuts...and if you're going to plus up someone else's budget, where's it going to come from?" Clarke said.

"What have we benefited from giving (away) all of these tax cuts?" Rep. Adrienne Wooten, D-Jackson, asked Read.

"There are some movements of companies coming down (from Tennessee)," Read said. "I think the economy is going to take a turn, and I think, give us a couple years and see what happens, we might surprise you on that."

Lawmakers had little to say about the three budget bills they failed to pass during the regular session, causing the governor to call the June special session in the first place. The Mississippi Department of Transportation, the attorney general's office and State-Aid Road Construction now all have budgets for the new fiscal-year.

The attorney general's office is still looking at a 14-percent budget cut. The Department of Transportation budget bill did not include a list of what House Transportation Committee Chairman Rep. Charles Busby, R-Pascagoula, called "pet projects" but otherwise looked the same as before the House attempted to add funding mechanisms for road repair in the regular session.   Busby told the House Appropriations Committee that he would continue to work to get support for funding the state's roads and bridges through a maintenance program.

Lawmakers also passed two cleanup bills for the secretary of state's office that clarify certain settlements his office is required to pay.