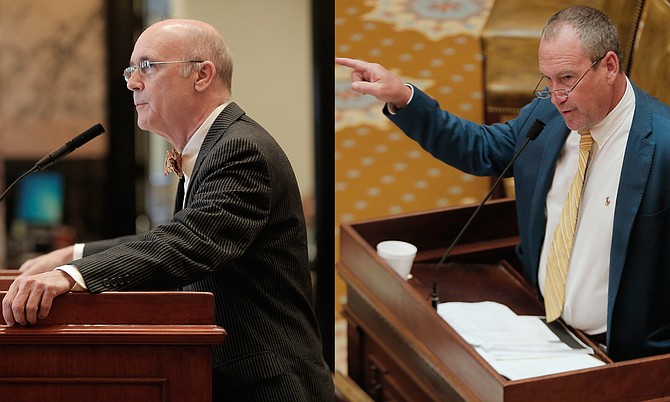 Sen. Hob Bryan (left), D-Amory, asked for answers from the governor's office on the Senate floor about why budget holes and their cause were not addressed sooner in the session. Rep. Herb Frierson (right), R-Poplarville, told House members that the governor can only use SB 2001 to spend the money that the Legislature appropriated in their fiscal-year 2016 budget. Photo by Imani Khayyam.

JACKSON — For as long as some experienced lawmakers can remember, this week's special session was momentous.

"Never before in the history of the state that anybody can imagine have we been in a situation where the last week of a fiscal year we are being asked to give the governor unlimited (spending) authority," Sen. Hob Bryan, D-Amory, told the Senate presenting an amendment that would fail to Senate Bill 2001, a bill designed to mend fiscal-year 2016's budget holes.

Gov. Phil Bryant has a $50 million spending cap when it comes to the rainy day fund, and he had already spent $45 million of that limit to plug holes in the state's fiscal-year 2016 budget, which ends today, July 1. When he called lawmakers back to Jackson on June 28, it was to address the shortfall in revenues that could range in value but will be less than $60 million by the time the fiscal year ends on July 1.

Senate Bill 2001, the bill that appeared on Tuesday to fix the budget problems, added seven words to the part of Mississippi's law that enables the governor to spend $50 million worth of rainy day funds, adding the words "with the exception of fiscal year 2016."

The Senate Appropriations Committee passed the bill through committee in less than five minutes, but on the floor, senators had plenty of questions for Vice Chairman Sen. Briggs Hopson, R-Vicksburg, who had the task of taking the bill up on the Senate floor because Chairman Sen. Buck Clarke, R-Hollandale, was already on vacation when the governor called the special session.

Sen. Hob Bryan, D-Amory, was the most vocal on the Senate floor, asking for answers from the governor's office about what went wrong with the budget between April, when the 2016 legislative session ended, and the end of June.

"It's going to take some convincing for me personally to believe that this special session could not have been avoided, and I may be the only one who wants to slow down the train and get that information before we go forward," Bryan told Hopson in the midst of questioning on the floor. "It's not possible to deal with the 2016 budget without affecting the 2017 budget."

Democrats in the Senate were uncomfortable giving the governor unlimited spending authority, and Sen. John Horhn, D-Jackson, presented an amendment that would gave the governor's spending at $100 million instead of $50 million for fiscal-year 2016. The amendment failed, however.

Hopson said a cap was not a good idea because no one could know exactly how much the state budget would be short.

"It would be imprudent for us to try and guess at a number that we think would be the amount we think we needed because if we missed the mark...we're going to be back here in a day or two," Hopson told the Senate. "The governor will call us back into special session."

The 2-Day Trip Up

Once the bill passed through the Senate, the House came back to take the bill up around 2:30 p.m., but the House Democrats were able to block suspending the rules to bring the bill up for debate. Instead of going to recess, however, the House adjourned for the day forcing the special session to become a two-day endeavor.

House spokeswoman Meg Annison told the Jackson Free Press that following House Rule 42, the speaker had to adjourn business for the day. The rule states that "a motion to suspend the rules for a particular purpose having been decided in the negative, it shall not be in order to renew the motion for the same purpose during the same day."

The next day, the House came back and had a lively debate over the budget-hole bill, with Democrats attempting to amend the bill eight times—some trying to cap the governor's spending, while others tried to allocate rainy day fund dollars to agencies who suffered from cuts to the fiscal-year 2017 budgets. The bill went through Rep. Herb Frierson's, R-Poplarville, committee, and he presented the bill on the floor. When asked, he explained how he thought the state budget got to this point.

"We anticipated more growth in revenue than we collected—and we appropriated to that number," he told the House. Frierson said that big chunks of the fiscal-year 2016 budget went to Medicaid, the state's debt service, MAEP and IHL budgets. House Democrats asked how tax cuts taken in previous years were affecting the budget today.

"The impact of the tax cuts since 2012 according to Legislative Budget office to FY16 is $140 million that has been taken out of the revenue stream," Frierson said.

Rep. Frierson used data that are only calculated through April 2016, and several taxes have an "unknown" impact, the Legislative Budget Office data sheet shows. The chairman said that the state was behind on collecting personal income tax, sales tax and severance tax—that for the most part were not affected by tax cuts from previous years.

House Democrats attempted to amend SB 2001 eight times, at first attempting to put a cap on the bill like the Senate did, but then trying to divert money from the rainy-day fund to the health and mental health departments, which suffered deep cuts in the fiscal-year 2017 budget which started July 1. Rep. Steve Holland, D-Plantersville, praised the state's public mental-health system and asked the House to debate budget matters more.

"Let's debate this, that's what we wanted to do yesterday, and that's what we're here to do today, this is not new," he said. "We suggested all through the 2016 regular session that we could take money for certain functions from rainy day funds that were priorities for us."

'Stumbling Blindly into the Darkness'

Lawmakers on both sides of the aisle warned of dangerous budget problems ahead for fiscal-year 2017. In the Senate, Sen. Chris McDaniel, R-Ellisville, spoke against the bill before he voted against it.

"What would we do without this rainy-day fund?" he told the Senate. "We probably should answer that question because those days are fast approaching."

McDaniel who has spoken out strongly against large bond bills in past sessions asked why the state is paying for aquariums, memorials and museums when we cannot pay off our budget.

"We are stumbling blindly into the darkness, Mississippi, and we are going to have this conversation next year and the year after and so on and so on until somebody decides we're going to have to raise taxes," he said. "And I cannot support an increase in taxes."

Frierson, who left the House July 1 to take up his new position as the director of the Department of Revenue, also warned of future budget troubles.

Democrats pointed to the tax cuts taken in the 2016 session and how those could impact the budget in coming years. Rep. Robert Johnson, D-Natchez, warned members of potentially becoming a Kansas or Lousiana but said that if legislative leaders wanted smaller government, they could have it.

After the bill passed, Gov. Phil Bryant denounced the Democrats for "grandstanding."

"It's regrettable that the grandstanding of the House Democrats cost taxpayers an additional $30,000," Bryant said in a statement. "I am grateful to the leadership of the Senate and the House for doing their job and allowing me to do mine—balance the state budget."