Middle-Class Families Could Get Special-Needs Help 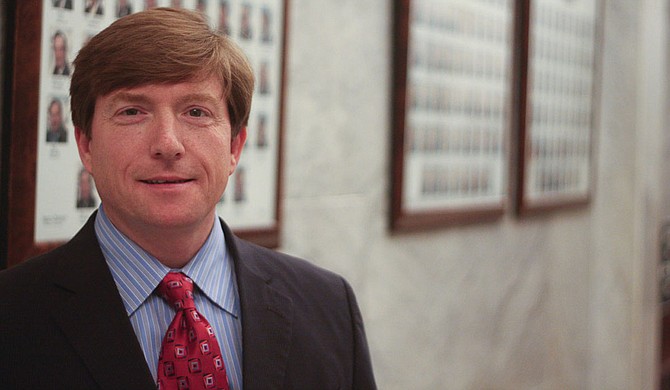 Rep. David Baria, D-Bay St. Louis, plans to introduce an alternative to the voucher through an amendment that would eliminate the voucher and create an Office of Special Needs Counsel. Photo courtesy Anna Wolfe

When the parents of 10-year-old Flannery Smith noticed their daughter's learning difficulty, they took immediate action.

Through legal help from the Mississippi Center for Justice, the family compelled the school district to provide services including diagnoses and a special computer program. Still, it took nearly four years to get the services she needs from Jackson Public Schools to overcome her central auditory processing disorder.

Randy Smith, Flannery's father and the chairman of the Creative Writing Department at Belhaven University, said his daughter lost one to two grade levels in the time the family sought help for her. Now, she is now making all As and Bs, he said.

"Things turned around for us," Smith said at the Capitol this morning. "Once we got legal representation, we were able to get JPS at the table. The district came; they worked with us. Our daughter was identified. She was assessed. We found out what her needs were. We identified her disabilities, and we got her the appropriate help."

If not for services available through the public-school district, Smith said his family would have had to fork over an estimated $40,000 to get help for Flannery. With the special-needs voucher bill currently under deliberation in the Legislature, the family would receive $6,300, but still would have had to pay more than $30,000 out of their pockets.

"Like most families in Mississippi, we don't have that kind of money," Smith said.

Smith is concerned that families who cannot afford expensive special-needs services on their own will not be helped by the voucher, which will only cover a portion of private costs.

Plus, it doesn't serve all students, he added. The Equal Opportunity for Students With Special Needs Act passed the House Education Committee Feb. 26. The bill would ultimately cost the state nearly $410 million and take more than 125 years to serve all students with special needs in the state, according to Baria's estimates. The bill provides $3.25 million in the first year to serve approximately 500 students.

Opponents of the bill, including legislative Democrats and supporters of increased education funding, complain that the bill will serve less than 1 percent of the 63,000 students with special needs in the state.

Rep. David Baria, D-Bay St. Louis, and fellow Democrats announced their analysis of Crawford's measure and offered an alternative during a press conference at the Capitol Tuesday.

Baria's alternative, which he plans to introduce through an amendment, would eliminate the voucher and create an Office of Special Needs Counsel.

The office would provide legal advice and help compel school districts to follow the laws the state already has to ensure students with special needs, like Flannery, get an equal education.

Baria said the office would cost the state $1.5 million, serve all students in its first year and not displace students from public schools.

A voucher bill similar to Crawford's passed the Senate and died on the House floor last year. Baria said the Republicans may have enough votes to pass it. Smith called the revived bill "election-year politics."

The main difference with this year's bill, Baria said, is it creates a separate line item for the funds appropriated to the voucher program, instead of taking the money out of the Mississippi Adequate Education Program.

Smith told the Jackson Free Press that he worries the voucher bill will only serve affluent families. The proposed special counsel's office, on the other hand, could have helped Flannery get services more quickly and could help other parents who don't have the financial means to provide special education themselves.

"The turn around really came because we were able to get the advice and counsel we needed to get the education that we already have a right to," Smith said.