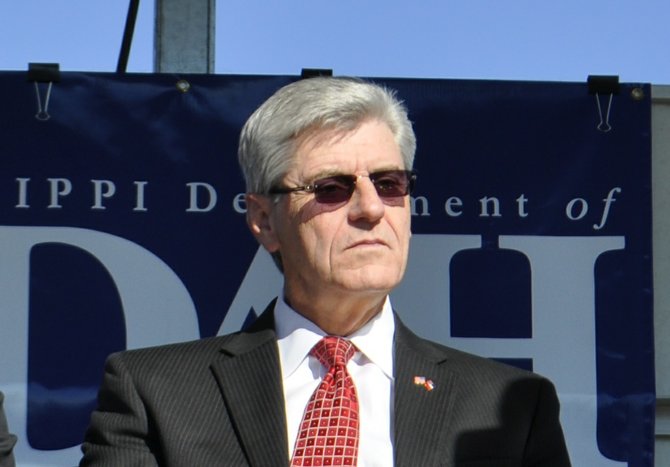 Gov. Phil Bryant has said he would sign a bill that has sparked controversy in Mississippi and nationwide. Photo by Trip Burns.

Does Senate Bill 2681, which the Mississippi Legislature approved, protect religious freedoms or open the door to legal discrimination?

It depends on whom you ask. Rep. Andy Gipson, R-Braxton, a Baptist pastor and chairman of a House committee that toned down highly controversial language in the original bill, said this week that "it protects Christians in the state from discrimination." Other lawmakers have said the bill mirrors federal legislation that progressive Democrats such as U.S. Sen. Charles Schumer of New York and former U.S. Rep. Barney Frank of Massachusetts supported in the early 1990s.

On the other side of the debate over SB 2681, the ACLU of Mississippi characterizes it as a law that "could open the door to discrimination." Sarah Warbelow, the state legislative director for the Washington, D.C.-based Human Rights Campaign, said that even with the changes, SB 2681 "has the effect of making LGBT people strangers to the law."

"Before Mississippi has had the opportunity to robustly discuss the lived experiences of LGBT people, this bill would hollow out any non-discrimination protections at the local level or possible future state-wide protections," Warbelow said through a news release about 2681, which also adds "In God We Trust" to the state seal.

Bryant has said he would sign the bill, but civil-liberties activists vow to fight its implementation. Today, advocates held a noon rally at the Capitol to call on Bryant to veto the bill, which says the state may not "substantially burden a person's right to the exercise of religion."

Originally, the bill said neither the state nor individuals could burden the practice of religion, which LGBT activists said meant that a business owner could use religious beliefs as a basis to refuse service to religious minorities and same-sex couples, for example. Supporters of 2681 often cited the example of a Canton city ordinance that would have made it burdensome for a church to open downtown.

Legal experts say adding the words "substantial burden" and limiting the effect of the bill to state action was important. The new version of 2681 could prevent Canton from blocking the church from opening up, but would not allow businesses to ban Muslims, for example, from shopping there.

However, because LGBT people do not yet have the same constitutional protections as other minority groups, advocates fear that some individuals in religiously conservative Mississippi might use the law ban same-sex couples and other LGBT groups from their establishments.

In 1993, Congress passed a Religious Freedom Restoration Act, which many Democrats, including Reps. Frank and Schumer as well as then-President Bill Clinton, supported. The federal RFRA also prohibits federal government agencies "from substantially burdening a person's exercise of religion" unless the government can prove the burden "furthers a compelling governmental interest" and "is the least restrictive means of furthering that compelling governmental interest."

Eighteen states have adopted their own versions of the federal law, while some other states, including Georgia, Idaho, Maine and Ohio, have rejected measures like the one Mississippi considered. Most recently, Arizona Gov. Jan Brewer vetoed a RFRA that state was considering and statehouses in Oklahoma and Missouri are considering their own RFRA bills.

"Nobody should be refused service because of who they are," said Jennifer Riley-Collins, executive director of the ACLU of Mississippi. "We remain hopeful that courts throughout the state will reject any attempts to use religion to justify discrimination."