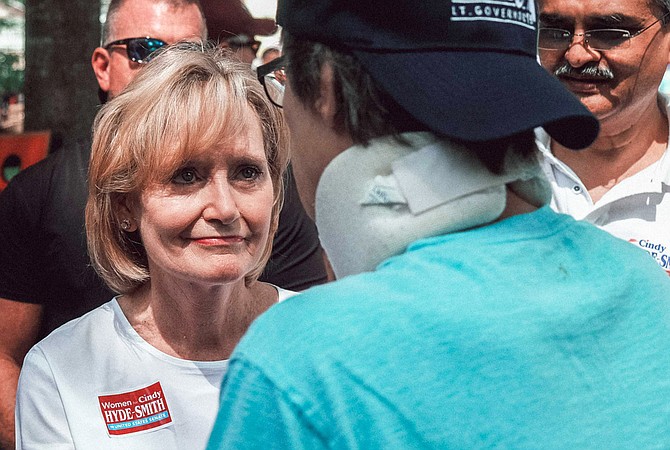 U.S. Sen. Cindy Hyde-Smith, R-Miss., listens to a constituent's health-care concerns at the Neshoba County Fair on Aug. 2, 2018. On Oct. 10, she voted to allow the expansion of plans that can deny pre-existing conditions coverage. Photo by Ashton Pittman.

JACKSON — In a press huddle on Nov. 1, U.S. Sen. Cindy Hyde-Smith said she had not cast "a single vote" to allow health-insurance companies to sell plans that discriminate against people with pre-existing conditions, but the Republican incumbent cast a vote last month that did just that.

On Oct. 10, she voted against Senate Joint Resolution 63, which would have prevented the Trump administration from allowing insurers to sell short-term insurance plans for more than three months. Those plans, referred to as "junk insurance" by detractors, can charge people with pre-existing conditions higher premiums, discriminate based on gender, impose lifetime limits, and even cancel coverage for people who get sick after enrolling.

On the day of the vote, her Democratic opponent, Mike Espy, said he was "deeply disappointed" that the measure failed.

"If I'm elected, the people of Mississippi can count on me to stand up to insurance companies trying to discriminate against patients with pre-existing conditions, and to make sure that health insurance does not become junk insurance," Espy said in an Oct. 10 press release. "My opponent should be called on to explain why she voted against something that would be good for so many Mississippians."

In response to a question from WAPT about Espy's claim that she opposes protections for people with pre-existing conditions, Hyde-Smith said Thursday that she had "no idea where he's getting that."

Asked if she had voted for any bills or amendments that would allow insurers to discriminate against people with pre-existing conditions, Hyde-Smith was similarly terse.

"Not a single vote, not a single amendment that would do that," she said.

"Either she doesn't know what she's voting on, or she is lying about her vote," Espy communications director Danny Blanton told the Jackson Free Press Sunday. "Either way, it's unacceptable. The people of Mississippi deserve better. Mike Espy will always fight to protect people with pre-existing conditions, and that means voting against these junk insurance plans."

The bill Hyde-Smith opposed that would have stopped the Trump administration from allowing the discriminatory short-term plans from going forward failed by a one-vote margin. Every Democrat and just one Republican, Maine Sen. Susan Collins, voted to stop the changes from taking place. Mississippi's other U.S. senator, Republican Roger Wicker, joined Hyde-Smith in voting against the bill.

It needed a simple majority to pass, but deadlocked 50-50. If Hyde-Smith, or any other Republican—had joined Collins in defecting, it would have passed.

Such a vote would have risked Hyde-Smith's coveted 100-percent pro-Trump voting record. For months, she has proudly touted her distinction at FiveThirtyEight as being one of just two currently serving senators with such a solidly pro-Trump record. The ranking takes into account how senators voted on the short-term insurance bill.

In recent weeks, a pro-Espy super PAC based in California, Power PAC Plus, has sent out mailers critical of Hyde-Smith's record on health care.

Skimpy, short-term insurance plans are not new; they were common before the Obama administration passed a rule in 2016 that limited such policies to just three months of coverage. Under Trump rules, insurers can sell short-term plans that include up to 12 months of coverage, and they can be renewed for up to 36 months.

The new federal regulations published in August explain how the plans are exempt from ACA rules.

"Short-term, limited-duration insurance is generally exempt from the Federal market requirements applicable to health insurance sold in the individual market because it is not considered individual health insurance coverage," the regulations read. "For example, short-term, limited-duration insurance is not subject to the requirement to provide essential health benefits and it is not subject to the prohibitions on pre-existing condition exclusions or lifetime and annual dollar limits. It is also not subject to requirements regarding guaranteed availability and guaranteed renewability."

Kaiser data show that a Mississippi resident living in Jackson has access to 21 short-term plans. Of those plans, just 57 percent cover mental-health services, and substance-abuse treatment and prescription-drug costs are each covered by just one-third. None cover maternity care costs.

The proliferation of such low-cost plans could raise the cost of ACA-compliant plans, Kaiser says, by drawing away younger, healthier people who do not think they need strong coverage, leaving a more costly, sicker group in the ACA-compliant pool.

McDaniel Lawsuit Sought to Strike Down the ACA

Unlike Hyde-Smith, McDaniel has been explicit in his opposition to the ACA from the start. In 2011, McDaniel filed a lawsuit on behalf of then-Lt. Gov Phil Bryant and other Mississippi residents, seeking to have the law overturned in court.

"If a party is forced to enter into another contract with another entity and forced to share private information and data such as medical records, that violates the right to privacy," McDaniel said at the time.

"If the individual mandate fails, the courts could still theoretically allow the rest of the law to survive," McDaniel told the Printz. "But practically, the law could not survive. As long as the pre-existing conditions remain in, people are going to wait until they are sick to buy insurance, making it impossible for health care companies to survive."

McDaniel's lawsuit failed, and separate challenges to the law also failed at the Supreme Court in 2012 and 2015. In 2017, Republicans repealed the individual mandate—a change that will go into effect next year.

Though McDaniel used precedent from Roe v. Wade to argue that court ought to strike down the ACA, he has campaigned on a promise to vote for Supreme Court justices that will overturn that ruling, allowing states to reenact bans on abortion.

In September, McDaniel tweeted that accusations of sexual misconduct leveled against then-Supreme Court nominee Brett Kavanaugh were part of a "charade" to "keep killing unborn children in the womb." Despite sworn testimony before the Senate by Christine Blasey Ford alleging that Kavanaugh attempted to rape her when she was 15 and he was 17, the Senate narrowly confirmed him, with only one Republican—Alaska Sen. Lisa Murkowski—defecting.

Last week, Democratic Congressman Bennie Thompson of Mississippi's second congressional district called on Gov. Bryant to pull out of a lawsuit with Republican leaders in other states that seeks to overturn the ACA.

The Jackson Free Press asked Hyde-Smith about the lawsuit at a Monday-morning campaign event with Bryant in Hattiesburg.

In August, Mississippi's other U.S. senator, Roger Wicker, joined nine other Republican senators in introducing a bill that would preserve some protections for those with pre-existing conditions should the lawsuit succeed in bringing the ACA down.

When the Senate passed the ACA in 2009, Wicker and Cochran voted against it.

In an interview with the Jackson Free Press in October, Wicker's Democratic opponent, Mississippi House Minority Leader David Baria, expressed his support for the ACA but said Congress needs to do more.

"The ACA was not perfect, but it was a damn good start in trying to fix our health-care system," Baria said. "And what should have happened is, once the fight was over, people should've come together and said, 'This is what's good about it, this is what's bad about it; let's work together, and let's try to fix it and improve health care for our entire country.'"

"[W]hat they've decided to do—since they were unable to repeal (the ACA)—is to just undermine it and let it fail of its own weight," Baria said. "We see they're taking votes on junk health-care policies that would allow health-care companies to deny people with pre-existing conditions, and they're intent on trying to crater the ACA."

Both Senate Seats on Tuesday's Ballot

In both U.S. Senate races, the incumbents—Wicker and Hyde-Smith—have refused invitations to debate their opponents. October marked ten years since Mississippi has seen a debate among U.S. Senate candidates.

In a secretly recorded video published by the Daily Journal last month, Hyde-Smith said that joining her opponents for a debate would be like giving McDaniel a $200,000 donation.

When Bryant appointed her, Hyde-Smith became the first woman from Mississippi to serve in Congress and could be the first elected come November. If Espy wins, he would be the first black U.S. senator from the state since Reconstruction, when Sens. Hiram Revels and Blanche K. Bruce represented the state in Washington, D.C., until the end of Reconstruction brought the disenfranchisement of black voters.