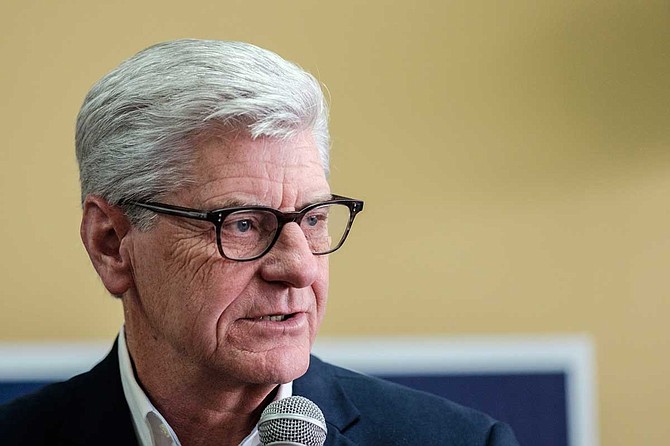 A federal judge in Texas struck down the Affordable Care Act on Friday, Dec. 14, as part of a lawsuit that 18 Republican state leaders, including Miss. Gov. Phil Bryant, joined. Photo by Ashton Pittman.

JACKSON — Mississippi Gov. Phil Bryant backs a lawsuit that Republicans designed to kill the Affordable Care Act and its pre-existing conditions protections. The case went before a federal judge who ruled the law unconstitutional on Friday.

If higher courts affirm the ruling that Judge Reed O’Connor in the Northern District of Texas handed down, it would end protections for people with pre-existing conditions against discrimination by health-insurance companies. Before the ACA became law, insurance companies could charge people with pre-existing conditions such as diabetes, cancer or heart disease more for coverage, or refuse to cover them outright.

The ruling, if upheld on appeal, would also end coverage for millions of Americans who receive subsidized health-care plans through federal and state exchanges, including about 90,000 Mississippians.

Trump’s Justice Department, which chose not to defend the law, had asked that O'Connor wait until after last month’s midterm elections to issue a ruling. O'Connor put his ruling out on Dec. 14, one day before the Dec. 15 open enrollment deadline.

Defenders of the ACA plan to appeal the ruling. Bryant, who was among a group that included two Republican governors and 16 Republican state attorneys general backing the lawsuit, did not return a request for comment Monday morning.

In October, though, Bryant wrote that the lawsuit was not about pre-existing conditions—even though it ends protections—but about continuing “to uphold the Constitution,” while Democratic critics of the lawsuit, like Democratic U.S. Rep. Bennie Thompson, “continue to gut it.”

In 2017, Republicans in Congress repealed the individual mandate tax penalty, nixing the enforcement aspect of a key part of the law that required those who can afford health insurance but chose not to buy it to pay a penalty. O'Connor struck the rest of the law down on Friday, in part because Congress did not intend for the law to stand without the mandate penalty, he wrote.

Ted Frank, a lawyer and conservative ACA critic, told the Post that he thought the ruling was “embarrassing,” and the the judge was “twisting (himself) into knots” to justify striking the law, suggesting he doubted higher courts would affirm the ruling.

University of Michigan law professor Nicholas Bagley, who supports the ACA, told the Post that he does not consider the lawsuit “an imminent or mortal threat to the Affordable Care Act.”

Bryant Opposed the ACA from the Start

This is not the first time Bryant was part of a lawsuit to end the Affordable Care Act. As lieutenant governor, he first joined an anti-ACA lawsuit in 2011—a year after President Obama signed it into law—which Mississippi State Sen. Chris McDaniel, R-Ellisville, spearheaded. That lawsuit, of course, failed in court.

In 2014, Thompson, Mississippi’s only Democratic congressman, appeared on the “New Nation of Islam” radio program based in Lorman, Miss., and accused Bryant of opposing the ACA, colloquially known as “Obamacare,” “just because a black man created it.”

After the Supreme Court made it optional for states to accept federal funds for Medicaid expansion, which would have covered about an additional 300,000 Mississippians, Bryant refused it.

“According to a Milliman report requested by the Mississippi Division of Medicaid, an estimated 400,000 people could be added to the Mississippi Medicaid rolls if we accepted the Obamacare expansion,” Bryant wrote in a 2012 op-ed for the Washington Times, citing numbers that have since been revised. “Such an expansion could result in 1 in 3 Mississippians being on Medicaid and would balloon the state’s associated cost burden.”

Though the federal government would have paid for Medicaid expansion for the first few years, Mississippi would have had to pay 10 percent of the cost of expansion in later years.

Bryant wrote in the op-ed, “I cannot imagine directing money away from our children’s education, our ability to keep our citizens safe and our ability to provide for ourselves through job creation in favor of funneling more money into a program that addresses none of these other critical needs.”

Since then, Bryant has approved budget reductions that slash education funding, even as he signed historic tax cuts. In 2016, the Republican-dominated Legislature passed the largest tax cut in the state’s history, phasing out the $260-million-a-year corporate franchise tax and cutting $145 million in income taxes.

Earlier this year, Mississippi Republican U.S. Sens. Roger Wicker and Cindy Hyde-Smith joined nine other Republican senators in introducing a bill that would preserve some protections for those with pre-existing conditions should the lawsuit succeed in bringing the ACA down.

At a rally for Hyde-Smith in November, Trump claimed that “right here in Mississippi we’ve opened affordable plans that are up to 56 percent cheaper than the disaster known as Obamacare.”

Those plans, referred to as "junk insurance" by detractors, can charge people with pre-existing conditions higher premiums, discriminate based on gender, impose lifetime limits, and even cancel coverage for people who get sick after enrolling.

The proliferation of such low-cost plans could raise the cost of ACA-compliant plans, Kaiser says, by drawing away younger, healthier people who do not think they need strong coverage, leaving a more costly, sicker group in the ACA-compliant pool.

In October, Hyde-Smith and Wicker both voted against blocking the Trump administration from expanding access to those skimpy plans.