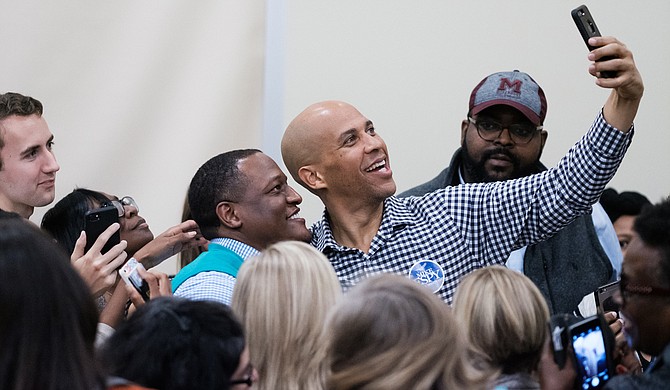 “When your country calls, you stand up and serve, and he went into an election where people didn’t give him a chance, and he drove it to a runoff,” the New Jersey Democrat told a filled-to-capacity room of students and supporters at the University of Southern Mississippi.

“He says, ‘You know what? We need to solve problems,’” Booker told the crowd of Espy. “‘We need to fix things. And they aren’t Democratic or Republican problems.’”

Though Mississippi is deep red, it is the state with the highest African American population in the country at 38 percent, and Espy would be the first black U.S. senator from the state since the post-Civil War Reconstruction era.

Booker highlighted Espy’s position on health care, including his support for the Affordable Care Act and its pre-existing conditions provision.

“It is wrong in America for somebody to be denied health insurance because of a pre-existing condition,” Booker said to applause.

Booker said not to assume the race in Mississippi is a “lost cause.”

Booker, one of just three currently serving U.S. senators who are black, previously campaigned for Espy in July. California Democratic Sen. Kamala Harris campaigned with Espy in Jackson on Saturday.

On Nov. 26, President Donald Trump will travel to Mississippi to campaign for Hyde-Smith at two rallies in Tupelo and Biloxi. Trump’s election-eve visit comes as Hyde-Smith faces scrutiny over two videos that sparked bipartisan statewide outrage.

One video published by the Bayou Brief on Nov. 11 revealed comments Hyde-Smith made at a Tupelo campaign stop on Nov. 2, in which she told a cattle rancher that, if he invited her to a “public hanging,” she “would be on the front row.”

On Nov. 15, Bayou Brief published a second video. In that clip, Hyde-Smith seems to call voter suppression a “good idea.”

Hyde-Smith Communications Director Melissa Scallan told the Jackson Free Press on Nov. 15 that the comment was a joke and that Hyde-Smith was referring to the idea of putting polling places on college campuses a “great idea”—not “(making) it just a little more difficult” to vote.

Republicans hope Trump’s visit will stymie the bleeding, but the videos’ publication has GOP officials worried that they could lose another Senate seat in a solid red Deep South state. The New York Times reported Monday morning that Hyde-Smith’s internal polls revealed Espy had narrowed the race to within just five points—an unusually close election for a state that has not sent a Democrat to the U.S. Senate in nearly four decades.

Tonight, Mississippi Farm Bureau will host Espy and Hyde-Smith for a U.S. Senate debate that will be broadcast on WLBT, WLOX and radio stations statewide at 7 p.m. It will be the first U.S. Senate debate in Mississippi in 10 years. The debate will last one hour and will be closed to the public and all media, except the moderator and panelists.