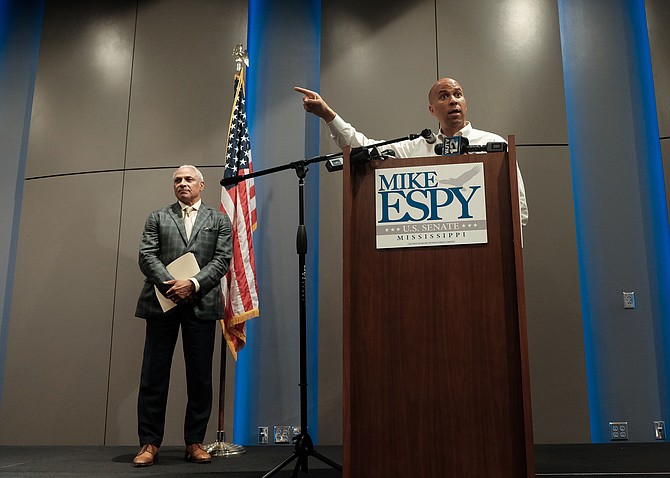 JACKSON, Miss. — No U.S. Senate race in the country could be more of a game changer in 2018 than the one Democrat Mike Espy is running for the seat vacated by former Sen. Thad Cochran, U.S. Sen Cory Booker, D-N.J., said in Jackson late Friday afternoon.

The high-profile senator, the former mayor of Newark, N.J., made the declaration during a press event with Espy at the Mississippi Civil Rights Museum in Jackson.

"That is the star that I see rising in the South," Booker said, gesturing toward former U.S. Secretary of Agriculture Espy. "That is the hope that this nation must have in Washington, D.C. And God willing, the people of Mississippi willing, we will have Mike Espy as the next United States senator."

Booker was a special guest at an event at the Mississippi Civil Rights Museum in February, billed as an alternative grand opening to the original launch in December 2017 when Gov. Phil Bryant invited President Donald Trump, causing many black politicians to boycott the event, and the stage to be dominated by white Republicans.

The senator from New Jersey said Friday that he came back to Mississippi knowing that he will not agree with a southern Democrat like Espy on everything. But, he said he believes that Espy has the "spirit of goodness and kindness and decency" that he believes is needed in Washington in order to bridge the partisan divide and address issues like infrastructure, healthcare and poverty.

Espy pledged to bridge the partisan divide in his home state. "We're going to forge consensus all across Mississippi because I've done that all my life," Espy said.

If Espy were to win the race in November when he faces off against recently appointed Republican incumbent Cindy Hyde-Smith and Republican Mississippi Sen. Chris McDaniel in a special election, he would become the first African American U.S. senator from Mississippi since Reconstruction.

When asked why he thinks 2018 could allow for such a victory as has never been seen in Mississippi before, Espy was blunt: "Well, I've never run before for statewide office."

Part of his broad appeal, Espy said, is his "Mississippi first" approach.

"I'm a Democrat, and I'm certainly not running against that," he said. "But I'm not only a Democrat. I'm a Mississippian. When I go to Washington, whatever law or regulation comes to us, the only judgment I have to make is, 'Does it help Mississippi?'"

As an example, Espy pointed to NAFTA, the North American Free Trade Agreement that President Donald Trump frequently criticizes as a "disaster."

"I personally negotiated NAFTA," Espy said. "Some folks in other industrial parts of our country don't care much for NAFTA, but here in Mississippi, farmers have done very well under the North American Free Trade Agreement."

The special election will be held on the same day as the national midterm elections on Nov. 6, 2018. Polls are open from 7 a.m. to 7 p.m. in Mississippi.