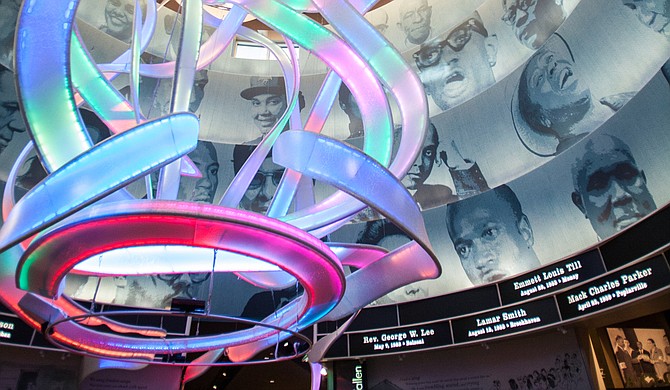 It was a scene that should have made President Donald Trump proud. Hundreds of people, including some members of Congress who had unpatriotically boycotted his State of the Union and generally did their best to perfidiously avoid their own president, all seemingly reclaimed their nationalism and stood alongside civil-rights titans. They rose, hands on their chests, eyes forward, proudly reciting the Pledge of Allegiance and singing the national anthem. No smile looked forced, and everybody seemed to be loving their nation that day.

"I recall when we got the word that (Gov. Phil Bryant) was going to invite a person from D.C.—who shall not be named—to come and celebrate the opening of this museum, Congressman (Bennie) Thompson and I ... decided that this was not appropriate. This was not supposed to be the time for a photo op. This was not an opportunity for (Trump) to leverage our sacrifice and our history for his political use," said NAACP President and CEO Derrick Johnson.

Bryant hit a nerve with his invite last December after the racially tone-deaf president failed to disavow white nationalists during recent neo-Nazi demonstrations. Trump's dismantling of the civil-rights office at the Department of Justice also doesn't help. Additionally, somehow, the governor had missed the fact that one of the biggest names attending the museum's Dec. 9 opening was the wife of slain civil-rights activist Medgar Evers, whose sacrifice is recognized in museum exhibits. A Ku Klux Klan member shot Myrlie Evers-Williams' husband in the back in 1963 and left him to die in his driveway, surrounded by his wailing family.

Setting the widow up to join a president endorsed by the Klan was a potentially devastating exercise in awkwardness.

Nobody seemed ready to move on from that event. Event speakers, including U.S. Sen. Cory Booker, D-N.J., U.S. Rep. Cedric Richmond, D-La., and civil-rights colossus U.S. Rep. John Lewis, D-Ga., all seemed to be trying to exorcise Trump from the premises, like a malicious spirit or an unexplained fish smell.

Richmond, for example, did everything in his power to build a box labeled "BACKWARDS" and pile everything Trump-related into it. The administration, he said, was on the wrong end of the very struggle the museum represents and proof that the champions of civil rights' battle was not yet won.

"The fights they fought we unfortunately have to fight again," Richmond said, and then ticked off a multi-point countdown of every backward step the administration staggered through this past year. This included rolling back voting rights, and enabling or supporting vote suppression efforts, and eroding money slated to help police restore trust in minority communities.

Other speakers called out Trump for appointing unqualified and racially biased judges to the bench, and defunding education and affordable-housing efforts. Many scoffed at his claim of African American unemployment as the "lowest rate ever recorded," when black unemployment is still almost double that of whites.

The symposium was undoubtedly a call to arms, but the overall mood was still light and upbeat, and with good reason. On the way in, attendees filed past a throng of optimistic and engaged young visitors, many socially aware and politically driven. This is a group with an interest in the museum and its message that could even help the facility surpass attendance expectations. Before symposium attendees knew it, this new, mobilized generation of laughing youth had piled in around them, crushing them—and they were seemingly in delightful harmony with it all.

Naturally, this contributed to an ambient sense of hope and renewal. Lewis, himself, clearly felt it.

"I wasn't here the last time," said Lewis (who had made a point not to be), "but I have the sense that this time there is something a little more spiritual here, and a little freer, more inclusive."

Adam Lynch is a glorified secretary who argues about politics and a former news  reporter for the Jackson Free Press. Battle with him on twitter at @A_damn_Lynch.