UPDATED: Trump May Be in Jackson for Civil Rights, History Museums' Opening 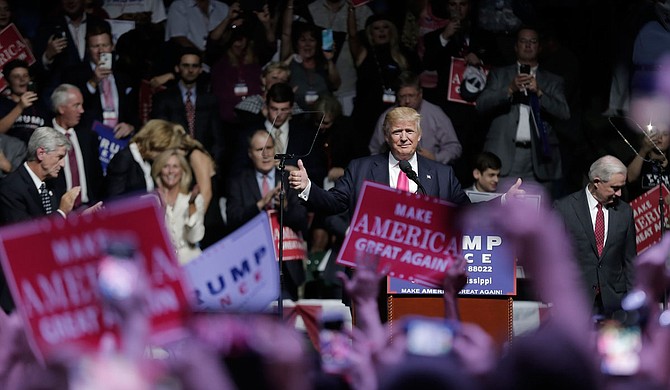 President Donald Trump may attend the grand opening of the Museum of Mississippi History and the Mississippi Civil Rights Museum on Saturday, Dec. 9. The last time he was in Jackson, Miss., was during a rally on the campaign trail in 2016. Photo by Imani Khayyam.

JACKSON — This weekend, the Museum of Mississippi History and the Mississippi Civil Rights Museum will open their doors—and President Donald Trump might make an appearance.

This afternoon, CNN reporter Kaitlan Collins reported that Trump will make an appearance at the opening on Saturday. However, the White House press office could not confirm the president's schedule for this weekend to the Jackson Free Press. An advisory listing his schedule will be published later in the week.

In a press release, Rep. Bennie Thompson, D-Miss., says that Gov. Phil Bryant invited the president to attend the event on Saturday.

"With President Donald Trump accepting Gov. Phil Bryant's invitation to attend the opening of the Mississippi Civil Rights Museum, I am hopeful he will begin to understand the pain he is causing in the black and underserved communities across America," Thompson said in a press release. "His unfair budget cuts in agriculture, education, healthcare, and housing disproportionately impacts people of color and is viewed by many as an act reminiscent of Jim Crow policies of the south."

This Little Light of Ours: Mississippi Civil Rights Museum Shines a Light on History

The Mississippi Civil Rights Museum opened its doors temporarily on Tuesday, June 27, for a preview of the impactful, honest and focused features, like the Freedom Riders exhibit.

The Mississippi Department of Archives and History has scheduled civil-rights veterans Myrlie Evers and Congressman John Lewis to speak as well as Gov. Phil Bryant and former Govs. Haley Barbour and William Winter. Evers is the widow of NAACP leader Medgar Evers, whom white supremacist Byron De La Beckwith assassinated at Evers' Jackson home in 1963 in front of his children.

The Two Museums event on Saturday is part of Mississippi's 200th birthday celebration. The museums dive deep into the state's history as well as the many significant parts of the Civil Rights Movement that happened in Jackson and throughout the state.

"At a time when this state and country will reflect upon the sacrifices made by those known and unknown in Mississippi for the struggle for Civil Rights, an invitation to a President that has aimed to divide this nation is not becoming of this historic moment. Recent policies championed by President Trump that include the dismantling of the Affordable Care Act that provides thousands of Mississippians with access to affordable health care and a full-blown attack on voting rights by limiting access to the right to vote are not reflective of core Civil Rights principles," Hampton said in a press release.

"Most recently, the passage of bad economic policy in the form of tax cuts for corporate interests and the wealthy on the backs of lower and middle-income families cuts against the very values that many struggled to fight against. The Mississippi State Conference NAACP requests that Governor Bryant rescind his invitation to President Trump to attend the Mississippi Civil Rights Museum until his national public policy agenda is representative of the very values that the Mississippi Civil Rights movement was founded upon, justice and equality for all,” Hampton continued in his statement.

Preparations for the Two Museums opening have been going on for months. City road crews are milling and resurfacing several streets downtown this week.

City public works director Bob Miller told the Jackson Free Press he has paving scheduled for the blocks immediately adjacent to and surrounding the museums that he plans to be finished by Saturday.

This story has been updated with a statement from the Mississippi NAACP. Email state reporter Arielle Dreher at [email protected]. Read more about the state's race history at jfp.ms/slavery.