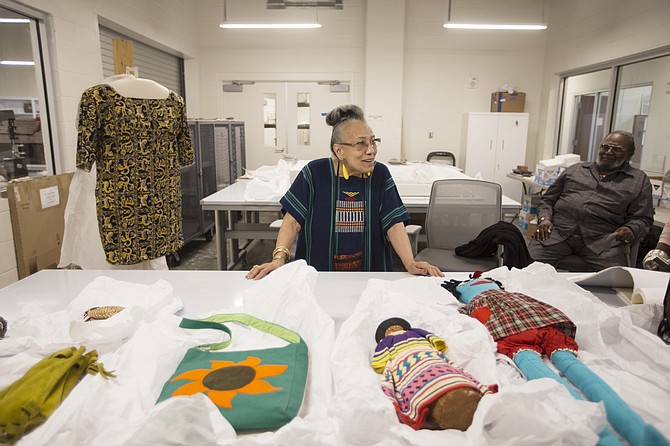 Civil rights activist and professor Doris Derby, who was active in coordinating work co-operatives in Jackson in the '60s, visited the Mississippi Civil Rights Museum to see the artifacts she donated to the "War on Poverty" exhibit. Photo by Imani Khayyam.

Doris Derby, a civil-rights veteran who worked in Jackson in the 1960s, walked into a basement room of the not-yet-opened Mississippi Civil Rights Museum and saw her black and yellow dress she had made when she moved to the South.

"That dress was specifically made for me as a photographer. ... I designed it and made two pockets at the top so I could put my camera lens and my film in it; that's why there's some little pockets at the top," Derby said.

Derby took photographs, predominantly along Farish Street during the Civil Rights Movement in Jackson, as well as helped organize several working co-ops for black men and women who were shut out of employment opportunities for being a part of the movement.

The New York City native, who now lives in Atlanta, Ga., says co-ops formed with 10 or more black men or women who could come together and work in their community.

"We would send a representative to their area to talk with them about that, so they'd have to find a place and have 10 people. ... I was one of the persons who would go once they were ready to be organized and talk to them," Derby said.

She estimates there were between 20 to 30 co-ops over time, but was not sure on an exact number. Families were able to work, earn some money and get new skills. The products they made were sold elsewhere.

A handmade leather pouch, an Ethiopian drawstring backpack Derby used as her camera bag and a handmade doll are all among the artifacts she donated to the Mississippi Civil Rights Museum, which will go into the "War on Poverty" section of the museum.

Derby, whose father was a photographer, started taking photos at a young age. When she came to Jackson in 1963, she had established herself as a visual artist, primarily painting and drawing. She was working at Tougaloo College with the Student Nonviolent Coordinating Committee teaching literacy skills to students and helping them register to vote. In 1966, she began taking photos again. The Southern Media Group located its office in the Liberty House and the Poor People's Corporation, and the director asked her to work with that project. Derby jumped right in, mainly capturing photos along Farish Street.

"I thought that was important, not just to take pictures and put them in an album, but to share them as a focal point for joy and remembrance and discussion because we did have lots of discussions," she said.

Derby, with her husband, got a look at the artifacts on Wednesday, as Mississippi Department of Archives' staffs worked to prepare them for display.

A collection of Derby's photographs from the Civil Rights Movement in Jackson will be on display at Jackson State University. Derby will deliver a lecture and unveil her photos in the Johnson Hall Art Gallery at JSU tonight at 6 p.m. tonight.

The Mississippi Civil Rights Museum and Mississippi Museum of History open on Dec. 9, 2017.