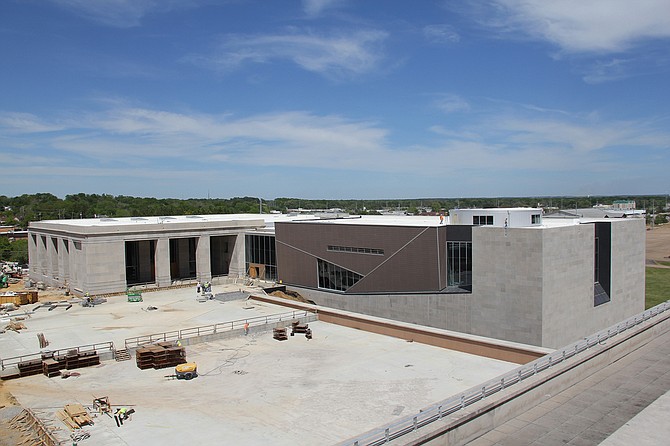 The Museum of Mississippi History (on the left) and the Civil Rights Museum (on the right) are set to open in December 2017. Photo courtesy MDAH

JACKSON — The Museum of Mississippi History and the Mississippi Civil Rights Museum could bring $17 million a year into the city and state's economy, a spokeswoman for the museums said Wednesday. The two buildings, together dubbed the 2 Museums Project, are set to open in December 2017 in time for the state's bicentennial. . On Wednesday, Mississippi Department of Archives and History Director Katie Blount described the themes and concepts of the two museums at a Jackson 2000 luncheon. She anticipates the museums will draw about 180,000 people per year.

The overall theme of both museums "history is dynamic," Blount said. "It's a work in progress, and it influences our lives."

"The State of Mississippi did a great thing building these two museums together," Blount said. "It's really important symbolically that people would walk in the same door together to learn our history together."

Practically speaking, Blount said the State saved a lot of money putting the two museums in one complex.

The Museum of Mississippi History traces the state's roots back to 10,000 B.C. to present-day Mississippi, including the stories of all people who lived in the state. The museum has the theme of "One Mississippi, Many Stories," and the idea is to collect many stories from the state told by the different voices of the people who lived them, Blount said.

The museum will feature zones marked by time period as well as three breakout galleries, which include one that highlights the state's Native American heritage and history.

"We are telling all of the stories in all their complexity, not shying away from any aspect of a story no matter how difficult or complex," Blount said.

Part of that difficult history will be reflected in lynching monoliths throughout the museum, which will list the names of lynching victims in the state and their stories.

Artifacts on display in both museums will mostly come from the Department of Archives and History collections, which includes some that have sat in storage since Hurricane Katrina. Blount said the department is still taking donations of artifacts, particularly for the Civil Rights Museum.

The 2 Museums complex will have public event space, including an auditorium, classrooms and a front lawn.

The Legislature has bonded $74 million to help fund the project, and the Department of Archives and History had to raise private donations to make the dollar-for-dollar match. In the 2016 legislative session, the Legislature approved a $16.6 million bond, which Blount said, will complete funding for construction costs at the complex. Next year, she said, the department will ask for funding for operating expenses before the two museums open in December 2017.