Symbol of Racist Terror Set for Display in State Museum 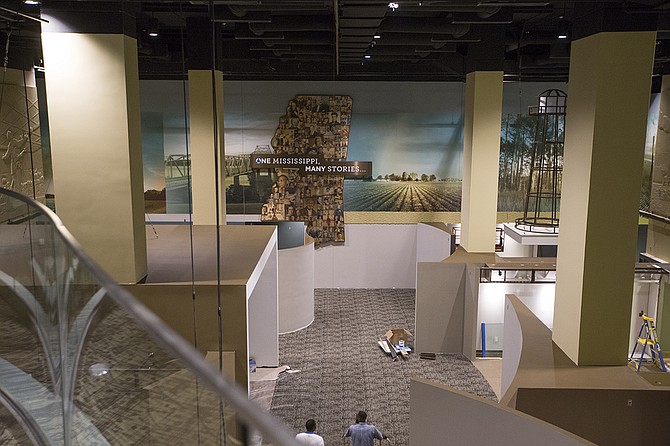 The Mississippi Civil Rights Museum and the Museum of Mississippi History, which share a lobby, are being built near the state Capitol in downtown Jackson. They are set to open Dec. 9 for the state's bicentennial. Photo by Imani Khayyam.

JACKSON, Miss. (AP) — The terror of a burned cross and the comfort of hand-crafted quilts. Those contrasting images will be shown in side-by-side museums telling the complex story of one Southern state.

The Mississippi Civil Rights Museum and the Museum of Mississippi History, which share a lobby, are being built near the state Capitol in downtown Jackson. They are set to open Dec. 9 for the state's bicentennial.

The buildings are being outfitted with displays, and companies based in Tennessee and West Virginia are making custom-crafted mounts for artifacts. Their work requires exact measurements to create holders from wire, Plexiglas, steel rods and other materials.

Doug Zellman works for 1220 Exhibits in Nashville, the company creating mounts for the Museum of Mississippi History. As he and a few colleagues worked in a back room of the museum last week, Zellman said exhibit mounts should blend into the background so viewers will focus on the historical items rather than what's holding them.

"Once we paint them to match the object, they'll almost disappear," Zellman said, holding up a mount for piece of logging equipment.

Greg Mendez works for ParaMounts Artifact & Exhibit Specialists in Charlestown, West Virginia — the company making mounts for the civil rights museum. After taking measurements months ago, Mendez created steel rods that bend to match the contours of a wooden cross that was burned Aug. 12, 1964, outside the home of the Vaccarella family in McComb.

The white merchants owned several stores, and they were pressured to fire black employees who tried to register to vote, according to a 1965 report by the U.S. Commission on Civil Rights.

The cross, more than 6 feet tall, still has the upright portion and one arm intact. The Vaccarella family had kept the remnant in storage, and donated it to the museum. It will be part of a display about terror inflicted by the Ku Klux Klan and others who violently resisted integration and black voting rights.

The two museums will share a space for temporary exhibits, and the first of those will show quilts crafted in Mississippi, including one made in 1902 by Sallie Lumbley Miller of Yazoo County. The velvet quilt depicts Mississippi with what were then 75 counties. The state now has 82.

Another of the quilts was made in 2008 to celebrate Barack Obama's election as president. The quilt, by Geraldine Crystain Nash of Port Gibson, depicts an African-American man and woman picking cotton and is titled, "The hands that picked the cotton, now help pick presidents."