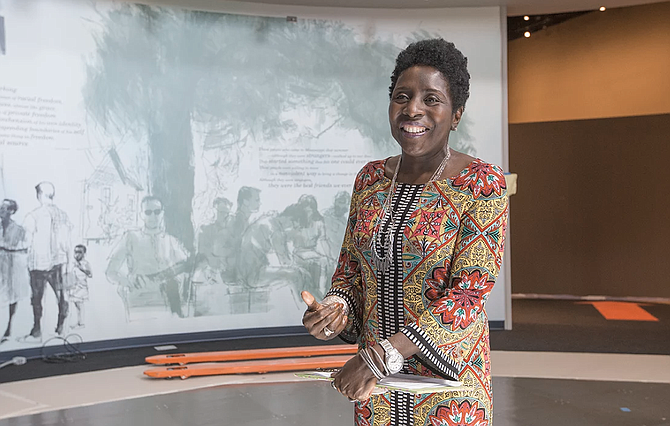 JACKSON — Myrlie Evers-Williams, wife of slain civil-rights leader Medgar Evers, stood before a crowd of 600 people in 2013 for the groundbreaking of two new museums to document Mississippi's history. Evers-Williams, a native of the state, proclaimed she will finally be proud to be a Mississippian when the museums opened their doors in downtown Jackson.

Fast forward four years later, and the Museum of Mississippi History and Mississippi Civil Rights museum have taken shape. The museums opened their doors for a preview of the impactful and focused features of both museums.

The Mississippi Legislature is paying the majority of the bill, but the Foundation for Mississippi History raised $17 million in private funds for exhibits and programs, the museums' website says

The Museum of Mississippi History, which spans 20,000 square feet and two floors, starts like all good stories, at the beginning. "We are giving the time and context of what Mississippi was like," Museum Director Rachel Myers said.

The museum will feature four immersive theaters to educate audiences on the subject matter and time periods. One theater, modeled after the oldest African American church in Jackson, Mount Helm, will play a film on the period from Reconstruction to 1927.

The museum's theme, "One Mississippi, many stories" goes into the history of the state while giving museum goers the opportunity to reflect. Myers said that "reflection rooms" will be in different parts of the museum for people to tell their own Mississippi stories, which will be displayed on screen.

"This will be the spot where our contemporary videos will show," Myers said. "You'll be able to sit and record your own stories."

On the second floor, a balcony overlooks the maze of Mississippi history. Myers calls it the "selfie spot."

"You get a sense of the amount of history," she said.

Pamela Junior, the director of the Mississippi Civil Rights Museum, said that the opportunity to tell the stories of the Civil Rights Movement is extremely important for all generations.

The legs of history in the museum all connect to a heart of sorts. The main reflection room displays quotes on the walls as "This Little Light of Mine" fills the air. A 40-foot-long sculpture will be displayed on the ceiling.

"Through the organizing, the strategizing, the mobilization, they took movement," Junior said of the people who led the charge for black freedom in Mississippi.

The museum begins with a timeline from slavery to freedom. The eight galleries include a focus on the Freedom Riders, Emmett Till, the Evers, Black Empowerment and a final gallery, "What's next?"

The walls of the Freedom Riders room are covered with mugshots of the riders who came to Jackson on previously segregated buses and were arrested in Jackson. "They were fighting for a cause for someone like me," Junior said. "So that I have the rights of all rights as a human being. That's what they fought for."

Junior said photographs are the main focus on the walls of the museum to truly tell the story of the museums. "We've done it right," she said.