Silent Protesters Will Greet Trump at Opening of Mississippi Museums 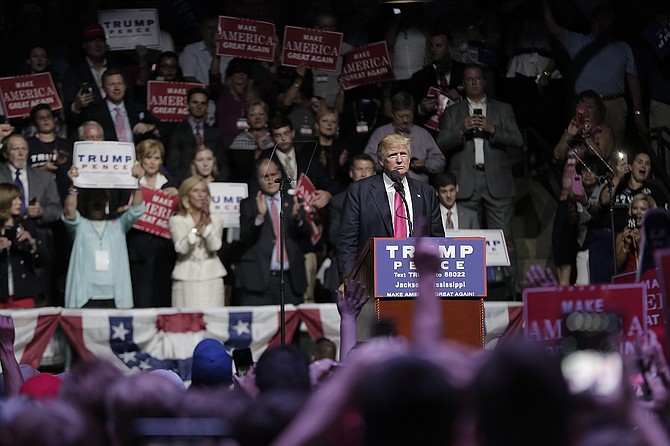 The last time Donald Trump was in Jackson, he was campaigning for the presidency. On Saturday, if he attends the opening of the Museum of Mississippi History and the Mississippi Civil Rights Museum, he will likely encounter protesters. Photo by Imani Khayyam.

JACKSON — The Mississippi chapter of the NAACP and a Hinds County Democratic committee are calling for Trump's surprise plans to visit Jackson this weekend to be cancelled. That does not seem likely, however, after White House Press Secretary Sarah Sanders said the president "will participate" in the grand openings of the Museum of Mississippi History and the Mississippi Civil Rights Museum in her press briefing this afternoon.

Jacksonians were preparing to celebrate the Mississippi's 200th birthday on Saturday, when the two museums will open their doors to the public. Then news broke that President Donald Trump might attend the ceremony. Now, Mississippi protesters plan to greet him there.

Civil-rights veteran Myrlie Evers, the widow of NAACP leader Medgar Evers, whom white supremacist Byron De La Beckwith assassinated at their Jackson home in 1963 in front of his children, is scheduled to speak. U.S. Congressman John Lewis, a civil-rights veteran who helped coordinate the Student Nonviolent Coordinating Committee's "Mississippi Freedom Summer" in 1964, is also scheduled to speak Saturday as well.

Trump lashed out at Lewis in January after the Georgia congressman said he was not a "legitimate" president. Lewis was one of several Democrats who boycotted his inauguration, CNN reported.

But who invited Trump in the first place? He is not listed on the official press release from the Mississippi Department of Archives and History as a speaker or guest, and Rep. Bennie Thompson, D-Miss., said in a statement yesterday that Gov. Phil Bryant invited the president.

"With President Donald Trump accepting Gov. Phil Bryant's invitation to attend the opening of the Mississippi Civil Rights Museum, I am hopeful he will begin to understand the pain he is causing in the black and underserved communities across America," Thompson said in a press release. "His unfair budget cuts in agriculture, education, healthcare, and housing disproportionately impacts people of color and is viewed by many as an act reminiscent of Jim Crow policies of the south."

The governor's communications staff has not responded to repeated calls and emailed requests for comment.

The Mississippi chapter of the NAACP is among those who have called on the governor to rescind his invitation to Trump. Corey Wiggins, the executive director of the Mississippi chapter, said members and local branches can choose how they want to participate in Saturday's activities.

"If the president does decide to attend or to visit the museum, I would hope there's a serious dialogue or conversation about the differences in the policies being proposed and how those policies do not align around those core values of the civil rights movement about equality and justice," Wiggins told the Jackson Free Press today.

Jacqueline Amos, the chairwoman of the Mississippi Association of County Democratic Chairs and Hinds County Democratic Party, issued a statement this morning asking authorities to cancel any appearance and remarks the president might make.

"As the direct political heirs to the Freedom Democratic Party and in the spirit of Mrs. Fannie Lou Hamer, we call upon all the authorities involved to cancel any appearance and remarks by President Donald Trump immediately," Amos said in a press release.

"Any reasonable person knows that the presence of such a hugely divisive and polarizing figure will pervert and diminish what could otherwise be a healing and teaching moment for our state. Mr. Trump attained to the highest office in the land by appeals and tactics that do great and lasting violence to our civil rights heritage," the statement continued.

"His campaign appealed to the very worst demons of the American soul. He is a disgraceful president, a malicious influence, and an abominable human being. He has no place at a celebration of the very values and aspirations his presidency is clearly committed to destroy. Mr. President, leave Mississippi alone. We have had far too much experience with your kind already."

While the mayor is out of town and could not be reached for comment, his chief of staff, Safiya Omari, told the Jackson Free Press Monday that they are still awaiting official details, including an update from Jackson Police Chief Lee Vance. Omari also mentioned the City had heard whisperings of President Trump coming to town last week, which the Jackson Free Press had heard as well.

JPD's spokesman, Sgt. Roderick Holmes, said he has "very limited information," and that he was told to direct inquiries about Saturday's logistics to Megan Powers, a lead press representative at the executive office of the president. Powers told the Jackson Free Press that logistics would be available later this week, and in the meantime to contact the governor's office about confirming other details. The governor's office is not responding.

Some Mississippi lawmakers have sounded off on social media about the news. House Speaker Pro Tempore Greg Snowden, R-Meridian, called on Mississippians to "embrace it."

"Nothing could bring more national attention to the opening of the Museum of Mississippi History and the Civil Rights Museum than an appearance of the President. Embrace it, Mississippians! Democrat, Republican, liberal, conservative ... embrace it!" Snowden tweeted on Monday.

"Inappropriate for Gov to have invited POTUS to MS for this occasion in light of his statements and actions that can be considered racially insensitive. In fact, I feel that it would be disrespectful to many of those individuals honored in the museum for the president to attend," he tweeted.

Pam Confer, who wrote and produced the song "Mississippi Beautiful" that will play in the "Where Do We Go From Here?" gallery in the Civil Rights Museum, says the opening of the two museums is a historic moment for the state and celebrates people who made large sacrifices.

"While I do acknowledge that it's a tough choice ..., I also acknowledge that it's a moment in history. I stand on Saturday for those people who are no longer here who can't stand, who can't witness this," Confer told the Jackson Free Press today. "So as far as I'm concerned, I stand for them. I stand for the voices and faces who will never know on Saturday."

'Too Much Irony to Process'

Talamieka Brice, who organizes the Pantsuit Nation Mississippi Facebook group, said several community organizers are coming together to form a peaceful protest on Saturday if Trump makes an appearance. She said it is important that the protest be silent because she does not want to disrespect Evers, Lewis or the museum staff.

"Our main goal is to make sure that we are respectful of the occasion as well as expressing our displeasure with the commander-in-chief, who is an open racist," she told the Jackson Free Press.

At this point, Brice said the most likely protest plan is a silent kneel-in, as well as some protesters carrying signs that cannot kneel. She reiterated that the protest is in no way related to the museums.

"We fully support the museums," Brice said. "It's the attendance of Donald Trump (we're protesting)."

Brice said the group is just now making preparations, including securing a permit and finding a place to meet beforehand. One community group, the Jackson metro chapter of Indivisible, is organizing a meet-up at Whole Foods on Wednesday as part of its monthly meeting, but also to prep signs for the presidential visit to the opening of the two museums.

"We extend our full support and well wishes to the Museums and their staff for all the amazing work they are doing," the Facebook event says.

Some Mississippians have decided to boycott Saturday's opening ceremony altogether, opting to visit the museums another day. Blake Case, a local Jacksonian, wrote a piece for "Deep South Voice" explaining why he would not attend on Saturday.

"I, for one, will not be present for Saturday's ceremony if the President decides to attend. Why? Because watching a man that has been praised and endorsed by the KKK, sitting next to the widow and children of Medgar Evers and Congressman John Lewis, open a civil rights museum in Mississippi is too much irony to process, even for me," he wrote in the piece published Monday.

This story is developing and has been updated with confirmation from Sarah Sanders that Trump plans to participate in the opening of the two museums on Saturday. Email state reporter Arielle Dreher at [email protected]. Read more about Mississippi's race history at jfp.ms/slavery.