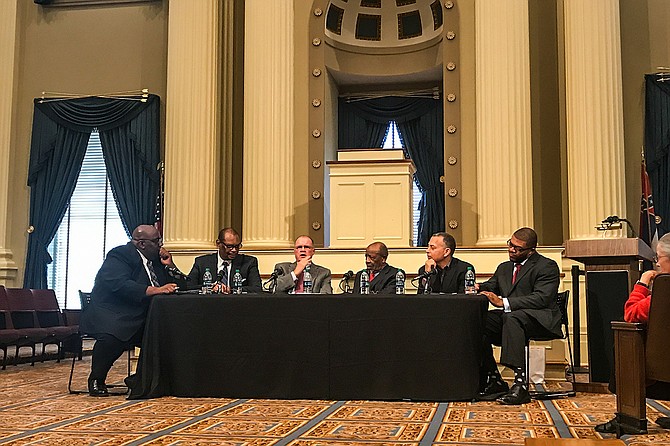 The Mississippi Humanities Council sponsored a three-day, four-part series to discuss the history of the kneel-in movement to desegregate Jackson churches in the 1960s. Photo by Ko Bragg

JACKSON — This day and age, it is almost impossible to talk about kneeling without thinking about Colin Kaepernick and his NFL protests during which he and now other football players have taken a knee during the national anthem to bring awareness to racial injustices in America. But in the early 1960s, the kneel-in movement centered around integrating churches in the South. In Jackson, this manifested as a student-focused movement that led by Rev. Ed King even after NAACP leader Medgar Evers was assassinated. King was then the Tougaloo Chaplain who helped students organize for civil rights and was close to Evers.

In 1963 and 1964 under the leadership of King, who is white, integrated groups of volunteers attempted to attend Sunday worship services at 22 all-white Protestant and Catholic churches in downtown Jackson. The movement began in historic Woodworth church on the campus of Tougaloo College.

"On May 29 police arrested King and others for trespassing when they attempted a kneel-in on the steps of the Federal Building on Capitol Street. The next day, King's actions convinced his fellow Methodist ministers to discontinue his status with the conference, effectively expelling him from his own church," The Mississippi Encyclopedia reads.

King and Medgar Evers decided to visit white churches as a way to skirt around a court injunction that banned public demonstrations and civil disobedience. The Jackson kneel-ins began around May 1963, and Evers was assassinated on June 12, 1963. King continued the movement out of a "solemn obligation" to show Evers could not be stopped. The intention was to "stir the consciences of white Christians" through a campaign that would invite churchgoers to rethink the morality of segregated churches.

"Hopefully, people if they turned away, shut the doors, they would have to think about what they had done," King told the Jackson Free Press. "But there was one church where after the ushers said, 'no, you can't come in,' we said, 'well, would you let Jesus in?', and one man said, 'this is our church, what does He have to do with it?'"

Most churches refused to allow volunteers to enter, but the Mississippi Encyclopedia says that "after police began arresting visitors in 1963, some denominations began to reevaluate their racial policies."

Between Saturday, Dec. 2, through Monday, Dec. 4, the Mississippi Humanities Council sponsored a four-part event series focused on bringing the Jackson community together to engage with what the church kneel-in movement meant in the 1960s and what we can learn from it today.

At its second event in the chamber room of the Old Capitol Museum, Mississippians gathered for a panel discussion positioning kneel-ins and civil rights movements in the present and future. Rev. King sat in the audience for a panel discussion between moderator Augustus Argrett; author and professor Ralph Eubanks; Von Gordon of the William Winter Institute for Racial Reconciliation; Central United Methodist Church Pastor Rev. David McCoy; civil-rights veteran and minister Dr. John Perkins, and Perry Perkins of Working Together Jackson.

Martin Luther King Jr. said once that Sunday church is "the most segregated hour." An audience member asked for advice for desegregating churches today and how they can become more diverse so the next generation will worship together and become advocates side-by-side through religion.

"Building relationships," McCoy said. "You and I have to talk, and you have to come to my church, and then I have to do the same. We have to go out and eat together, form ball teams, whatever we can do to interact to bring about conversation. For us to dispel that myth of superiority in one of us and inferiority in the other, it comes from all of us sitting here to make that a reality."

Because the panel contained no women or younger people, this reporter asked how the panel could ensure that both women and millennials got their voices heard in such discussion.

"I was raised in a household full of women; men just weren't around," Gordon said. And everywhere I go and everything I do I feel like I'm representing my wife and my daughters, and I always feel woefully inadequate in doing it."

"There's no substitute for their presence," Gordon continued. "I think we have to intentionally create spaces where the voices of women, where we just get out of their way."