Inside Trump's Private Event at the Opening of the Two Museums | Jackson Free Press | Jackson, MS

Inside Trump's Private Event at the Opening of the Two Museums 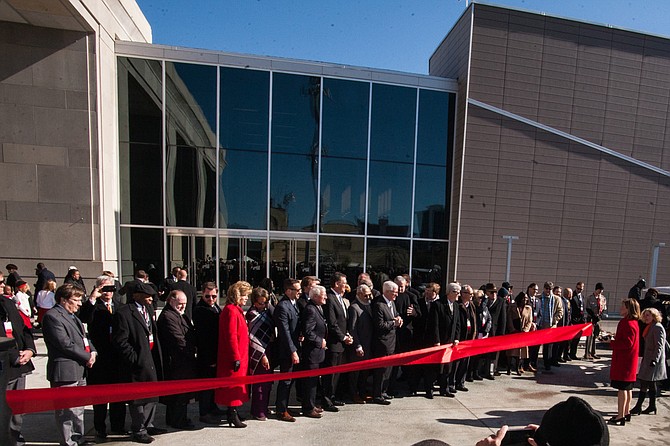 Myrlie Evers cut the red ribbon outside the Museum of Mississippi History and the Mississippi Civil Rights Museum that opened on Saturday. She also sat through remarks from President Trump at a private ceremony before the public opening. Photo by Stephen Wilson.

JACKSON — Mississippi turned 200 Sunday, and President Donald Trump descended upon Jackson to crash the party at the invitation of Gov. Phil Bryant. After an uproar over Trump's attendance, he gave remarks in a freezing cold room in the Mississippi Civil Rights Museum filled with white Republicans, their families, museum donors, and a sprinkling of civil-rights veterans.

Myrlie Evers, the widow of Medgar Evers who was also outspoken about Trump's presence, slid into the room at the last minute before remarks began. Her brother-in-law, Charles Evers, a Trump supporter, along with the mayor of Vicksburg, George Flaggs, arrived shortly before Evers—the two men had greeted Trump on the tarmac at the Jackson-Medgar Wiley Evers Airport. Reuben Anderson, the first black judge on the Mississippi Supreme Court and former NAACP defense counsel, opened the private ceremony, and delivered shortened remarks so as not to keep the president waiting. The program was delayed by about 30 minutes because the icy weather had slowed down Air Force One's arrival.

"This is a great day that we have, and we waited a long time for it," Anderson said, adding that it took a lot of "arm twisting and soul searching" to get the museums erected. He said that he had taken the president on a brief tour of the museum and showed him the photograph of Vernon Dahmer's four sons looking at his burned-out home after their father was murdered. Klansmen firebombed Dahmer's home when he and his wife were inside. Vernon, a civil rights activist, did not survive long after the incident.

"That story, as I told the president, "Anderson said, "tells a lot about Mississippi. We've been through a whole lot, we've seen a whole lot, but we're a forgiving and loving state."

Anderson made time to thank Gov. Phil Bryant not only for being "out front and pushing these museums from day one," but also for inviting the president to attend the museum opening.

Then the governor approached the mic and the crowd applauded him as he shouted out "good morning" and other pleasantries. He expressed how proud he was that the president as well as Dr. Ben Carson, secretary of Housing and Urban Development, had come to the private event. Notably, in his White House-appointed position, Carson referred to poverty as a "state of mind" and said that those in the transatlantic slave trade were part of the immigrant story.

Though she did not get a formal shout-out and could mainly be seen around the perimeters, former contestant on "The Apprentice," Omarosa Manigault, was also there. She was Trump's director of African American outreach during his campaign and now holds the title of director of communications for the Office of the Public Liaison.

Bryant continued Anderson's sentiments of not wanting to keep the president long nor the people who sat outside in the cold waiting for the private ceremony to be finished so that the official programming could begin.

"Two hundred years and the president of the United States is here to talk about our museum and our history," Gov. Bryant said about the state's bicentennial before introducing his "friend," the 45th president.

President Trump entered the room with enormous applause and a standing ovation as "Hail to the Chief" played over the loudspeakers. He began with expressing his love for Mississippi, "a great place," and thanked the governor for the introduction and "honoring him with the invitation." He thanked Anderson, "a great man with a great reputation, even outside of the state of Mississippi," Trump said.

Trump opened with talking about how extraordinary these museums are, and nodded to Gov. Bryant's "great legacy" in making them happen.

"The Civil Rights Museum records the oppression, cruelty and injustice inflicted on the African American community, the fight to end slavery, to break down Jim Crow, to end segregation, to gain the right to vote, and to achieve the sacred birthright of equality here," the president said. "And that's big stuff. That's big stuff. Those are very big phrases. Very big words."

Trump briefly spoke about Martin Luther King Jr., James Meredith and the Jackson Public Library sit-ins in 1961 before anchoring his speech in the history and legacy of Medgar Evers, whom a white supremacist killed in Jackson in 1963.

"We are deeply privileged to be joined today by his incredible widow—somebody that's loved throughout large sections of our country—beyond this area," Trump said. " So I just want to say hello to Myrlie. Myrlie. Where is Myrlie?" He paused to search the crowd for her, while the audience applauded and stood for her.

Earlier that week, Evers told The New York Times that "if God gives me the breath and the strength" she would address his attendance, although she did not speak at the private event nor did she mention him by name in any of her later remarks.

The president continued on script, clearly reading directly from prepared remarks, and closed by thanking the "great governor" again. He briefly shook people's hands in the front row before being whisked away to re-board Air Force One just one hour after touching down in Jackson to return to his hotel in West Palm Beach, Fla.

CORRECTION: a previous version of the story mistakenly listed Vernon Dahmer as a lawyer. We apologize for the error.