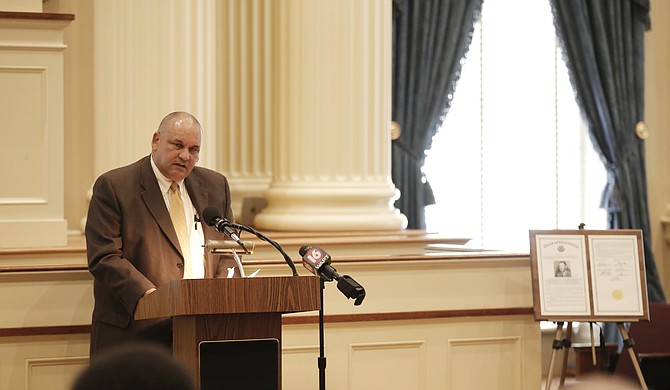 Dennis Dahmer, one of Vernon Dahmer's sons, thanked the Legislature for honoring his father from both sides of the political spectrum in both the House and the Senate. Photo by Imani Khayyam.

The Mississippi Legislature recognized the Dahmer family at the Capitol Friday morning, and several civil-rights activists and family members gathered at the Old Capitol Museum after the ceremony to commemorate Vernon's legacy.

Dennis Dahmer, one of his sons, thanked the Mississippi Legislature for working on the resolution to honor his father regardless of party lines.

"It shows that you can cooperate if you want to cooperate," he said. "The only thing I would ask our elected officials ... is to be considerate that everybody is not in the same position in life, and different groups have different needs."

Dennis echoed his father's belief that the power of the ballot was the only way to bring about change, and he said that while Mississippi has come a long way, the state still has a long way to go.

Vernon was a civil-rights activist and NAACP chapter president in Forrest County in the 1960s. He led the charge for voting rights and supported the Student Nonviolent Coordinating Committee organizers in Hattiesburg to bring a voter-registration project to the area. He was an independent farmer, and he had a big family. He remarried twice, and his third wife, Ellie Dahmer, was with him the night the Ku Klux Klan attacked his home.

Klansmen firebombed the Dahmer home on Jan. 10, 1966. The family survived, but the father died from the damage to his lungs from the fire. Four of his children and his wife attended the event on Friday.

Hollis Watkins, one of the SNCC workers who stayed with the Dahmers in Hattiesburg in the '60s and worked closely with Dahmer, spoke at the event. Watkins said he was a serious man who would do what needed to be done for the Civil Rights Movement. The same day that the Dahmer home was attacked, Vernon Dahmer went on the radio to announce that he would pay any person's poll tax who could not afford it. Watkins said that was just the kind of person he was.

"Mr. Dahmer had overcome fear, which I think a lot of us today have not made it to that point," Watkins said.

Former Gov. William Winter expressed his regret and apologized for everything that happened in Forrest County 50 years ago.

"We white folks owe them (civil-rights leaders, including Dahmer) as much as black folks do because he freed us too we were all prisoners of an indefensible system," Winter said.

The commemoration drew national attention, and in a letter from President Barack Obama to the Dahmer family, he wrote: "Citizens like Vernon Dahmer lived their lives in defense of the equality and justice in an endeavor to make our nation true to itself. These heroes embody the patriotism we proudly carry forward."

The Shady Grove Baptist Church in Hattiesburg is hosting a memorial service Sunday, Dec. 10, to mark the 50th anniversary of Vernon Dahmer Sr.'s death. Visit shadygrove-church.org to view a live broadcast of the event.