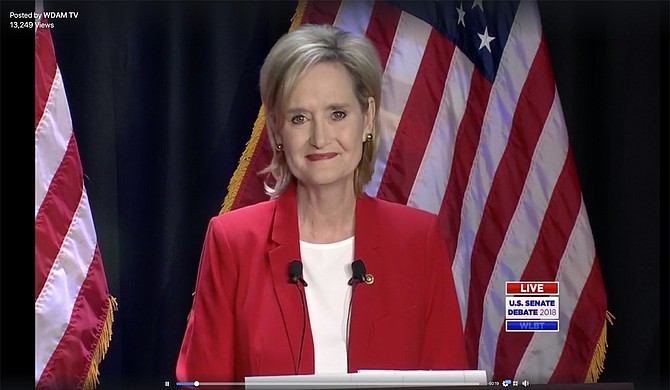 During the debate between U.S. Senate candidates Cindy Hyde-Smith and Mike Espy, Hyde-Smith accused Espy of discriminating against an employee who had a child with a pre-existing condition. Photo courtesy WLBT

We've heard a lot about protecting insurance coverage for pre-existing conditions this election cycle. Mississippians, like all Americans, have anxiety about maintaining that coverage. Cancer survivors, diabetics, heart patients or parents of children born with disabilities do not want to return to pre-Affordable Care Act days when those same conditions were grounds for denial of insurance claims and even cancellation of coverage.

If you are a cancer survivor as my sister and I, and many of our loved ones, are, insurance coverage for pre-existing conditions is enormously important.

U.S. Senate candidate Mike Espy has campaigned on protecting health insurance coverage for pre-existing conditions. Sen. Cindy Hyde-Smith has voted to destroy, repeal and deny that coverage in both the Mississippi Senate and the United States Senate.

This statement by Hyde-Smith is patently false.

Hyde-Smith is referring to an employee's situation that had nothing to do with insurance coverage for pre-existing conditions.

In 1987, James Patterson began working for the USDA, six years before Espy became secretary of agriculture in 1993. In 1990, Patterson began working for the Foreign Agricultural Service, a unit within the USDA. In early 1992, Patterson applied to serve as agricultural attache to Mexico. If assigned to Mexico, Patterson would have to move there, which he was willing do and move his entire family there. He had a daughter born with a congenital heart defect that required an initial surgery and continued care.

Before Espy worked there, the USDA assured Patterson that it had no problem with the family moving to Mexico.

The U.S. State Department must sign off on Foreign Agricultural Service officers. In 1992, the State Department denied a medical waiver for the daughter to move to Mexico because the distance from medical care might put her life in danger and/or cost the taxpayers too much money to travel back and forth to the United States for the care she needed. The State Department sent the file back to the USDA. At no time did the State Department or the USDA make any statement or take any position to deny health insurance coverage to this child with a pre-existing medical condition. Note that Espy was not secretary of agriculture at this time or an employee of the State Department.

Federal employees were not covered by the Americans with Disabilities Act, which forbade denial of a promotion based on an employee's relationship with someone who has a disability. Federal employees were covered by the Rehabilitation Act of 1973, which was similar but not explicit. There was no clear law and, at any rate, it was not the USDA that was denying the promotion; it was the State Department. At no time was the issue of health insurance for the daughter's pre-existing medical condition an issue.

In 1992, the year before Mike Espy became agriculture secretary, Patterson filed a charge with the EEOC. Health-insurance coverage for the daughter's pre-existing condition was not an issue in the EEOC charge.

Late in 1992, after Patterson's application for foreign service, Congress passed amendments to the Rehabilitation Act of 1973 to include the protections in the Americans with Disabilities Act. It was unclear if these amendments were retroactive.

In 1993 or 1994, while Patterson's 1992 EEOC charge was still pending, the Department of Agriculture entered into a mediation to resolve the situation in a way that would afford Patterson the foreign assignment that he applied for. The USDA, by then led by Espy, offered a five-year assignment to the post that Mr. Patterson that could be converted to a permanent assignment with separate maintenance (paying for) the mother and child to remain in the United States during the foreign assignment.

The State Department's medical staff and the Department of Agriculture medical staff were of the opinion that the daughter's condition was very high risk and that the foreign assignment would render her condition life-threatening. At no time was health-insurance coverage for Patterson's daughter's pre-existing condition an issue. (Mike Espy was secretary of agriculture at this time).

In April 1994, U.S. Sen. Tom Harkins wrote a letter to Secretary Espy opining that The Rehabilitation Act of 1973 had been amended in 1992 to cover Patterson's situation. At no time, either before or after Espy's tenure, was health-insurance coverage for the child's pre-existing condition an issue.

In August 1994, Secretary Espy wrote to Sen. Harkins explaining all the attempts to settle the matter with Patterson and Patterson's rejection of all the offers. Patterson had insisted that an official decision on the record from the USDA be completed by the end of the summer. Health-insurance coverage for his daughter s pre-existing condition was still not an issue.

In 1995, after Espy had left, the EEOC issued the decision Patterson wanted, saying he and his daughter and family could move to Mexico. The EEOC did not address health-insurance coverage his daughter because it was never an issue.

The facts show that Hyde-Smith made patently false claims.

Ironically, Hyde-Smith also said in the debate: "I strongly believe in the pre-existing condition."

Lies kill. And this lie told by Cindy Hyde-Smith will kill people when she votes to repeal Obamacare.

Mississippi voters are busy trying to make a living, raising up their children and grandchildren and caring for the least of these. We do not have time to run around behind a grown U.S. senator, whose words cannot be trusted to determine if at any given moment she is lying or telling half-truths or, in fact, telling the whole truth. We do not have time to work to undo the caricature she makes of Mississippians, or the embarrassment she brings to us and the defamations she speaks of us.

Mike Espy respected us enough to tell the truth in the debate; Cindy Hyde-Smith did not. Vote to give him two years now to finish Sen. Cochran's term, and give yourself and your loved ones with pre-existing conditions a fair chance, peace of mind and financial stability.

Vicki Slater is an attorney in Jackson, Miss.