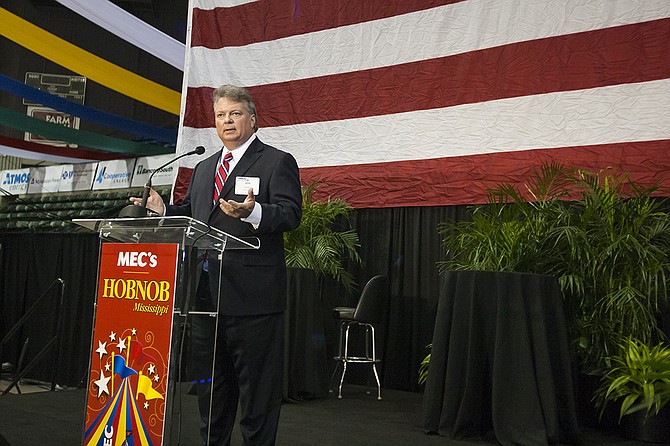 Attorney General Jim Hood assembled a statewide mental-health task force this fall, but those meetings will be closed off to the public and the press. Photo by Stephen Wilson

Then, though, Hood closed the task force to the public, blocking media and others from accessing its discussions.

In August 2016, the DOJ sued the state for an over-reliance on institutions to provide mental health care instead of community-based services.

The DOJ litigation will stretch out at least another year, court filings show. Attorneys will go into discovery this winter, which is not due until October 2018. A settlement conference is set for Oct. 16, 2018, but either party can cancel its appearance at the settlement conference a week before it is scheduled if that party believes it "would not be productive and should be cancelled." Pretrial conference and jury trial for the Olmstead litigation is set for spring 2019.

This year, political discussions around mental health have changed dramatically. Both Hood and Lt. Gov. Tate Reeves rallied for more community-based services at the Neshoba County Fair during the summer. Then Gov. Phil Bryant recommended that the Mississippi Department of Mental Health shift $10 million in its institutional funds to the services budget to "expand evidence-based, best practice services in the community to reduce reliance on institutional care." The department's budget and services are sure to take on a focal point in the coming legislative session. 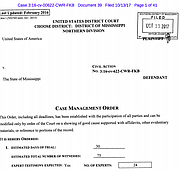 In the meantime, Hood's mental-health task force meetings will be closed to the public and the press, Margaret Morgan, communications director for Hood's office, said this week. She said Hood was open to having the meetings be public, but after polling members of the task force, decided to close the meetings to the public and press. The majority of members on the task force who responded to the poll asked to have closed meetings but allow journalists to interview certain task-force members who are willing after meetings.

Morgan said the task-force meetings do not meet the definition of "public body" found in the Mississippi Open Meetings Act. State law defines a public body as an entity created by "statute or executive order, which is supported wholly or in part by public funds." State law gives several definitions for a "public body" including a "policymaking entity."

"... (T)his task force is not defined as a public body because it will not establish policy," Morgan said in a written statement to the Jackson Free Press, which disagrees with that assertion.

"Hood convened this task force precisely to help establish better policy for mental-health services in the state," JFP Editor-in-chief Donna Ladd said. "It must be open to the press and to the public. Members of a public body should not be able to vote on whether to allow sunshine in or not. That defeats the purpose of having an open-meetings law."

When Hood announced the task force in October, he issued a lengthy press release, which included highlights from the first meeting.

Despite being able to make policy recommendations, Morgan said the meetings are not subject to the Open Meetings Act.

" ...(T)he task force may make recommendations; however, it does not have control over what other groups do with those recommendations," she said in a statement to the Free Press. "Therefore, it is not subject to the Open Meetings Act."

Ladd disagrees. "The same argument could be made for any policy-making body. A group convened to develop public policy often does not turn around and enforce it," she said. "I believe this is a red herring that Mr. Hood must reconsider in order to keep transparency in this process. He has provided no good reason to keep the public in the dark about these discussions."