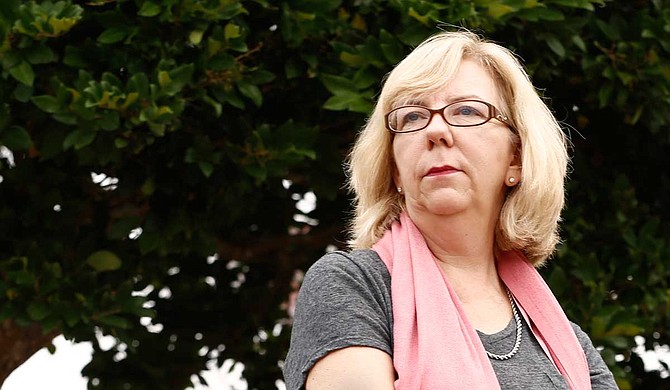 Joy Hogge, the director of Families as Allies, says the state of Mississippi is not doing enough to ensure that mentally ill people can live in integrated communities rather than in state hospitals. Photo by Imani Khayyam.

As a mental-health lawsuit claiming a violation of the civil rights of mentally ill Mississippians moves forward, Joy Hogge has in mind "a young person" who never received needed support.

The services available in the state relied too heavily on traditional therapy and not enough on ensuring the person would learn to manage illness and perform day-to-day functions, like going to school or working a job. The person descended into homelessness, which only compounded mental-health struggles. Today, this person sits in jail facing what Hogge calls "really significant charges" and the possibility of a long prison sentence.

"If they had the right services in the beginning of this, they wouldn't have ended up in this situation," Hogge told the Jackson Free Press on Wednesday morning. Hogge, who is the director of Families As Allies, did not identify the person by name or gender.

Hinds County Senior Circuit Court Judge Tomie Green says Hinds County has had to piecemeal a sort of mental-health court together because the wait at the state hospital for evaluations is so long.

On Tuesday, the State went to court against the U.S. Department of Justice, which charges that Mississippi is in violation of a 1999 Supreme Court ruling, Olmstead v. L.C., which found that states must ensure the same kinds of protections for mentally ill people as for other disabled people under the Americans With Disabilities Act.

"So what that said is that mental-health services should be set up to help them do those things, like help them learn how to work and manage their mental illness at the same time," Hogge said. "And that also means if that's really happening, we shouldn't rely on state hospitals so much."

Although Families as Allies focuses on children's mental health and the lawsuit is about how the State treats adults, Hogge said her organization supports the Justice Department's argument because "anything that helps adults is going to help kids, and we believe adults should get the help they need."

In court yesterday, attorneys for the State argued that Mississippi is making progress.

While the State has taken some steps in the last few years to comply with that ruling, it is not enough, the Justice Department argues. Hogge agrees.

"Mississippi got sued because even though the State has started to develop those kinds of services, they're very spotty, and they aren't offered consistently across the state," Hogge said. "And they may not be offered. So this suit is about taking the services that we already have that we're not offering consistently and making sure that people with serious mental illness have the opportunity to access those services so they can live in a community if they want to."

Mississippi Attorney General Jim Hood, the leading Democratic candidate for governor this year, brought the lawsuit on behalf of the State. In court, his attorneys argued that it is "unreasonable" to expect Mississippi to ensure mental-health coverage with "no gaps"—such as the gaps in coverage for people in parts of the state with no or few mental-health services. Hogge rebutted, pointing out that no one has set a "no gaps" standard forward.

"I'm very puzzled by that argument, and also I'm puzzled because nobody has said anywhere along the line . . . that Mississippi has to have a system with no gaps," Hogge said. "And I'm also offended in some ways because it could be interpreted as something thrown out there to get the public in an uproar by calling this lawsuit unreasonable."

The State of Mississippi could have settled this case, Hogge said, and that makes her wonder if the plan is to get this case to a higher court and potentially erode civil-rights protections for the mentally ill.

Right now, the case is in front of U.S. District Judge Carlton Reeves, an Obama-appointed federal judge known for liberal-leaning rulings, such as when he struck down Mississippi's gay-marriage and gay-adoption bans, and his repeated rulings against state restrictions on abortions. But once Reeves rules, either the State of Mississippi or the federal government could appeal the case to the 5th U.S. Circuit Court in New Orleans, and then potentially to the U.S. Supreme Court. Hogge worries that those higher courts, which are both mostly composed of more conservative justices, could weaken the protections for the mentally ill currently enshrined in the Olmstead ruling.

Hogge worries that might be the state's goal in fighting this case.

"That to me, would be like the equivalent on the education front of saying, 'Oh, well, I'll just go after Brown v. Board of Education,'" she said, referring to the 1954 case that ended racial segregation in public schools. "And that just stops my heart in its tracks. I'm not a lawyer, but if you're going after the fundamental civil-rights laws that protects a group of people, that's what it feels like to me. It's very hard to reconcile."

When asked if she thinks the State's case is Hood's genuine view, or if he just considers it his duty as governor to defend the state, Hogge said she is not sure, even though she has asked him the same question. As a candidate for attorney general, he has pushed for Medicaid expansion, which would help more people with mental illness gain coverage in the state, and he has made protecting rural hospitals a central tenet of his campaign.

As attorney general, Hood set up a Mental Health Task Force to look for ways to improve the state's response to mental illness, which she said she appreciates. But why not have the task force work with the federal government to find a solution and settle this case?

"So far, he hasn't brought that up to the task force," she said. "It almost to me looks like he's trying to do two things at the time, say yes, he wants to make the system better with the task force, but also defending the system and saying it's fine."

Hood set up the task force in 2017, composed of mental-health professionals, law enforcement, judges, advocates, researchers and others who regularly work with Mississippians with mental illnesses. The task force's goal was to find ways to improve the delivery of mental health in the state. In November 2017, the Jackson Free Press reported that Hood had chosen to keep the group's meetings closed to the public.

On Wednesday, Hogge took umbrage at arguments the state attorney made in court yesterday. During opening statements, Shelson said the federal lawsuit made employees in the mental-health system feel maligned, because it implied they discriminated against people with mental illness. That is not the case, Hogge said.

"The fact that (the attorneys for the state) were comfortable saying that in their opening statements made me concerned that they may be thinking this more about protecting the system, rather than the people who work in the system," she said. "Rather than having the honest examination of, 'Are the civil rights of people with mental illness being violated in Mississippi?', it's about them; it's not about anybody else."

Inside the Closed Mental Health Meetings

Attorney General Jim Hood’s mental-health task force is bringing together providers with law enforcement officers and other stakeholders to work on solutions for the state’s system of care.

Hood: 'We Need to Continue to Expand Mental Health Services'

The Jackson Free Press reached out to Hood's office Wednesday morning for comment. His communications director, Margaret Ann Morgan, pointed to an August 2016 press release they released the day the Justice Department first filed the lawsuit. In the statement, Hood said it provided a "meaningful opportunity" for state leaders to work together to improve the state's mental-health system.

"This lawsuit is a clarion call to all of us in state leadership to consider how we care for the least among us and how we can make it better," Hood said in that Aug. 11, 2016, press release. "I see this litigation as a challenge to our Legislature to find the resources we need to continue to expand mental health services. This is a clear opportunity for our Legislature, mental health professionals, our faith-based community, and all of us as Mississippians to come together to determine an effective way to address issues related to our mental health delivery system for years to come."

It was also a matter of faith, Hood said at the time.

"It's our obligation as Christians and people of faith to take care of those who are unable to take care of themselves," he said. "It's time for each of us to move forward to better fulfill that fundamental responsibility."

The State had already "made great progress in expanding community health programs," Hood said, but still had more work to do. At the time, he had already been negotiating with the federal government for years in hopes of avoiding the lawsuit, he said, and wanted to avoid a situation where the state would be bound to "perpetual federal oversight" when it comes to mental health.

In that same 2016 press release, Hood criticized the state Legislature, who that year cut mental-health services by $8.3 million even as it approved the largest state tax cut in Mississippi history, including $260 million in cuts to taxes on corporations. In his 2019 campaign, Hood has continued to criticize State leadership for those cuts.

On Wednesday, Morgan pointed out that Hood supported Senate Bill 2328, or the Forensic Mental Health Act of 2019, which the Legislature passed earlier this year. That law brings the State into compliance with federal law by requiring expedited mental-health evaluations in criminal cases and making it easier to move people with severe mental illnesses into the civil-commitment system for treatment and therapy instead of incarcerating them.

The federal lawsuit is continuing to proceed through the U.S. District Court for the Southern District of Mississippi and could last for several weeks.