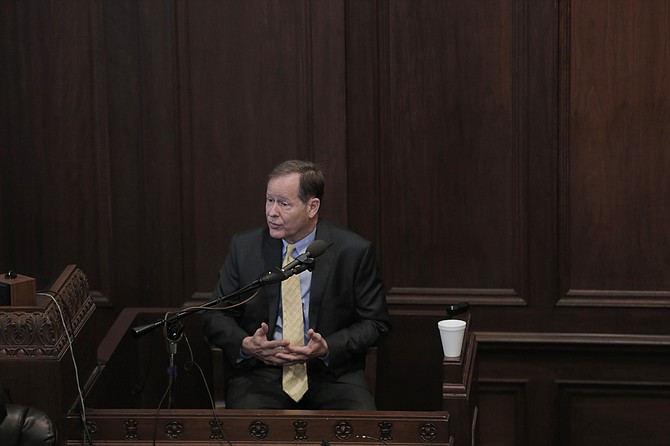 JACKSON — A sitting Hinds County Circuit Court Judge took the stand this morning in the trial of Hinds County District Attorney Robert Shuler Smith, despite his attorney's strenuous objections, testifying to his history with Smith. Weill had called their relationship "adversarial: in a letter to the Mississippi Bar.

Before the jury entered the courtroom, local attorney Frank Trapp argued before Special Judge Larry Roberts that if Weill took the stand, his testimony might force him to recuse from the Christopher Butler case.

Roberts, acknowledged the tension between Smith's due-process right to present his full case and the complicated consequences of Weill's testimony. He ruled that Weill could testify, the judge said, but that he would be "liberal" in approving objections from the attorney general's office.

Smith's attorney Jim Waide questioned Weill, who testified that he felt "intimidated" by Smith during two different occasions. The Jackson Free Press previously reported a letter from Weill to Adam Kilgore, the general counsel for the Mississippi Bar Association, expressing those concerns about Smith.

During a capital murder case on May 11, 2016, Weill said, he ordered a bailiff to seize the cell phone of an unnamed assistant for Smith after it went off during court proceedings. Weill said that later in the day, Smith banged on his chamber doors, bringing in a television crew to record his demands that Weill return the phone. Weill said he received "threatening" text messages from Smith later that night as well.

Otherwise, Weill's testimony was limited. Waide would ask a question, Trapp would object, and Roberts would sustain.

Yesterday, the court encountered a similar issue when Christopher Butler, the man at the center of the case against Smith, testified as the first witness for the defense. The problem then, Butler's attorney Kevin Rundlett explained, was that anything he said attorneys could use anything he said against him in any of the cases he currently faces, including drug charges from a 2011 Mississippi Bureau of Narcotics raid on his home and wire fraud charges the attorney general's office filed earlier this year.

Similarly to Weill today, Waide would ask a question, Rundlett would object, and Roberts would sustain. Butler, who said he spent five months in solitary confinement in Rankin County under MBN's orders, said he wanted to take the advice of his counsel, using his Fifth Amendment right not to provide potentially incriminating testimony against himself.

The last witness this morning was Charles "Tony" Davis, who said he worked on Smith's election campaign and knew both Robert "Too Sweet" Henderson and Smith as well as their families. As the third witness for the defense, Davis testified that Henderson was a "liar" and a confidence man. Yesterday, Henderson testified that he received three separate "donations" from individuals in exchange for dropped charges, all on the orders of Smith, allegedly using the money for the district attorney's campaign.

Davis is known locally for sending accusatory emails about various public officials, including Attorney General Jim Hood. On Oct. 15, 2015, Davis emailed many people an email slamming Hood, who was running for re-election at the end. The email ended: "Now I can say more but this is what happen in one county out of 82 in the State of Mississippi and Jim Hood did nothing! So people do you really want 4 more years of Jim Hoods Bull? People that dog don't hunt and the dog's name is Jim Hood!!!!!!! Vote that stanky butt sniffing liar Jim Hood out on November 3, 2015 ! This is a Public Service Message!!!"

After a lunch break, the court will continue to hear Davis' testimony.