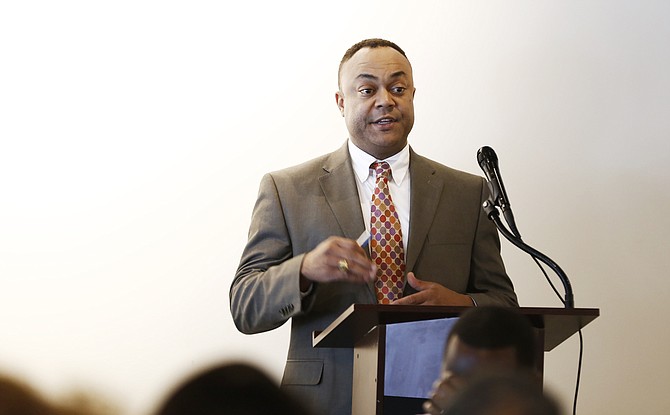 JACKSON — Attorney General Jim Hood revealed in court filings Friday that his office is using both confidential informants and secret recordings of the Hinds County district attorney in its quest to investigate Robert Shuler Smith and ultimately remove him from office for inappropriate interference with the prosecution of two local men. 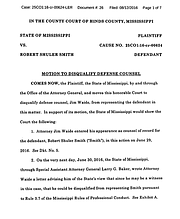 The shadowy investigative techniques were revealed in an Aug. 12 motion to disqualify Smith's defense counsel, James Waide III, of Tupelo. Waide signed on as Smith's attorney after Hood's office, working with the Hinds County Sheriff's Department and the FBI, arrested Smith in his office on June 22 for six counts of improperly trying to help two men under indictment for various crimes, even though he is a prosecutor, not a defense attorney. In the six counts, the AG's office accused Smith of various illegal "ex parte communication" with Christopher Butler and Darnell Turner, including jail visits, helping their defense attorneys and consulting with families on a defense plan. The Mississippi Bar also filed a complaint against Smith in July for improper behavior toward Hinds County Circuit Judge Melvin Priester Sr. and Senior Hinds Circuit Judge Tomie Green, both of whom have recused from his case.

Now, Hood wants Waide off Smith's case because, according to the motion, his office has a tape recording of Smith talking to a confidential informant that allegedly proves that the DA had discussed his desires to get Butler off on wire-fraud and embezzlement charges. "As part of its case-in-chief in this matter," the AG's motion states, "the State intends to offer evidence that Smith had one or more conversations with Attorney Jim Waide regarding Smith's attempts to assist Christopher Butler in connection with the pending charges against Butler."

Butler, 39, is in the Hinds County Detention Center in Raymond with a $500,000 bond since the State arrested him early this year for allegedly committing fraudulent white-collar crimes through his sales manager position at Mega Mattress in west Jackson. He is classified as a habitual offender due to past drug possession and sales convictions, and was out on bond for 2012 drug arrests by the Mississippi Bureau of Narcotics. Smith's office repeatedly delayed that case and tried to drop the charges last year, but Hinds County Judge Jeff Weill wouldn't allow it based on insufficient information in the motions.

Smith has argued for months that the AG does not have the right to prosecute Butler for the Mega Mattress charges without his blessing as DA, and has repeatedly promised that he and his staff re-investigated the drug case against Butler and has information that could clear him because MBN framed him back in 2012. That alleged evidence has not gone public to date, however.

The AG's motion reveals one way it is surreptitiously investigating Smith in its discussion about Waide. "For example, in one recorded conversation between Smith and a confidential informant," the motion states, "Smith stated the following: 'So we got Jim Waide ...' and 'he [Waide] came down here straight from New Orleans when I called him. ...'"

The motion states that Smith also told the informant, "Oh, we going to get him [Butler] free now between me and Waide and all that, and then Dennis is doing his thing on the other one." It is not clear in the motion, but "Dennis" may be the attorney representing Turner in his arrests for aggravated assault and domestic violence—Dennis Sweet. Attorney Sanford Knott is representing Butler, and has not returned calls for comment about this and related cases in the last week.

Smith also took a call from Waide, the motion alleged, and afterward told the confidential informant, "That was Jim Waide," and then Smith later said that "he said we have injunctive and declaratory relief," which Hood's office believes was Waide.

The motions do not clarify whether the recordings of Smith's comments about Waide and Butler are from a pre-planned wire or were provided to the AG's office after the fact.

Smith's statements to the informant are problematic on a number of levels, the attorney general argues in the motion. "As these excerpts plainly reflect, Smith sought to have Waide represent Butler in a pending case, although Butler already had counsel (Knott). Since the Christopher Butler case is a central matter in the State's case against Smith, Waide will be a necessary witness in the State's case against his client, Smith," the motion states.

"While other witnesses might be called to testify about Smith's involvement in the Butler case, the State will put in issue the question whether Smith sought to engage Waide to represent Butler and, in that respect, Waide's testimony is necessary to this prosecution and renders Waide disqualified under Rule 3.7."

Reached this morning, Waide told the Jackson Free Press that he could not address the specifics of Hood's statements about him until he is back before a judge. But Waide said that he wasn't surprised at the motion's language. "Yes, I was expecting it, but it's based on something they filed under seal," he said. "I'm going to ask for a hearing this coming Thursday."

On Thursday, the parties are expected to gather before Special Circuit Judge James D. Bell at 9:30 a.m. for a hearing on Smith's "Motion for Immediate Dismissal Based Upon Admission of Mississippi Attorney General." Smith has also filed motions seeking copies and transcripts of all sealed documents, as well as the appointment of a special prosecutor to replace the attorney general in the case.

Hood's office filed a motion Friday asking for this week's hearing to be delayed pending a sealed motion about the grand jury. Hood also wants the court to consolidate "pending matters" now before Special Judge James D. Bell into those before Special Judge Larry E. Roberts.

In the motion to disqualify Waide from representing Smith, the AG argues that the attorney's removal from the case is the right thing to do for Smith. "The Court has a duty, just as the State of Mississippi does, to assure that Smith receives a fair trial and to assure that his selected attorney is free from conflicts that might impact on his client's trial," the motion states.

"Since Waide will be a witness in this case, he cannot separate his role of advocate for Smith form his role as witness—regardless of whether his testimony is favorable of adverse to Smith. For that reason, Rule 3.7 mandates that Waide be disqualified from representing Smith in this case.