DA Files: ‘Too Sweet’ Reverend, Old Faces Back in News 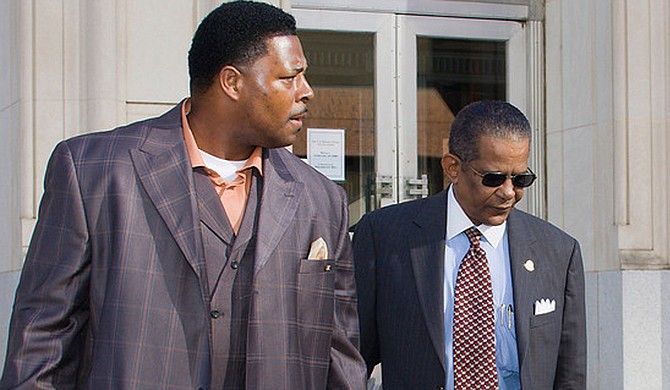 Rev. Robert Earl Henderson Jr. (left) was a long-time supporter of Mayor Frank Melton (right). Here he accompanies the then-mayor from his federal trial in 2009 for destroying a duplex in the Virden Addition with sledgehammers.

JACKSON — Names of men who were involved in the late and controversial Mayor Frank Melton's universe keep popping up in the convoluted accusations encircling Hinds County District Attorney Robert Shuler Smith. The DA was arrested June 22 after a joint state-federal investigation alleged that he had tried to interfere in the trials of Christopher Butler and Darnell Turner, whom he had known since he was a defense attorney.

The latest name to resurface in the maelstrom is that of Robert Earl Henderson Jr., 44, who was arrested July 29 for allegedly offering a $500 bribe to one of Smith's assistant district attorneys, Ivon Johnson, in exchange for the dismissal of charges against three criminal defendants on or about June 15, 1016.

The feds announced charges against Johnson, one of Smith's ADAs, on July 15, saying he "did combine, conspire, confederate and agree together to commit an offense or offenses against the United States" by accepting a bribe, on behalf of the Hinds DA's office, to reduce the bond amount for S.B., a person charged with a felony in the county, from $15,000 to $3,500 in exchange for $500.

Henderson's personal and criminal history reads like a who's-who of Jackson's power, politics and intrigue. Henderson, who is an ordained Baptist minister, is also known as "Too Sweet," and was a close associate of Melton for years before his death in 2009. Henderson was at Melton's side every day earlier that year at his federal trial in the old James O. Eastland courthouse in downtown Jackson.

The trial of Melton and his two bodyguards for leading a group of juveniles to destroy the home of a mentally disabled man in the Virden Addition with sledgehammers ended with a hung jury, and Melton died in office on the night of the Democratic primary election, just as the polls closed on his re-election loss.

Attorney General Jim Hood, along with then-Hinds County District Attorney Faye Peterson—a Melton critic who was appointed in 2001 to the position after long-time DA Ed Peters suddenly resigned after two decades—had previously tried Melton and his bodyguards in state court in Jackson for destroying the duplex, but the men were acquitted. Robert Shuler Smith, then a defense attorney based in the Washington Addition, defended Marcus Wright, one of Melton's bodyguards, in the trial. He later defeated Peterson after a campaign supported by both Peters and Melton. Turner worked for Smith's campaign; Smith told the Jackson Free Press then that he had known Turner for years.

Melton had long prided himself on helping young men in trouble around the city, controversially inviting many of them to live with him in his large home, with an Olympic-sized pool in the basement and a video-projection studio filled with large recliners, even as the fatherly figure was often intoxicated and kept numerous guns and a bulletproof vest on a rack in his bedroom that he loved to carry out on "patrol," as he called it, and in rides in the Mobile Command Center.

Like many of Melton's mentees, Henderson was a welcome visitor in Melton's home, sometimes bringing young people there to talk to the mayor, as he did April 2, 2006, on the eve of the trial of Albert "Batman" Donelson and associates in Hinds County court for allegedly killing rival Aaron Crockett on May 10, 2001.

On the Road Again with Frank Melton 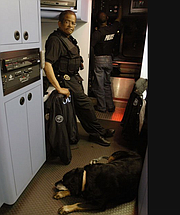 Melton, who told the JFP he was close to Crockett, had spent much of his 14-month tenure as the head of the Mississippi Bureau of Narcotics investigating Batman and friends rather than pursuing drug investigations—a distraction that led Gov. Haley Barbour to choose an MBN replacement when he took office in early 2003.

During the Donelson trial, attorney Robert Shuler Smith was defending James Benton, another of the so-called Wood Street Players that Donelson allegedly ran. Smith was present at Melton's home the same night and joined the odd mix of guests for a stuffed-chicken dinner—prepared by Melton and then-Police Chief Shirlene Anderson, who also washed dishes afterward—at the table with the JFP team, the bodyguards and young men who stayed in the home, some of them felons.

Smith would later tell the Jackson Free Press that he didn't know why Melton had invited him to his home on the eve of the Donelson trial, especially considering they were on different sides of the trial.

Donelson would be acquitted within days, however, and claimed later in an interview with the JFP then that he had no idea why Melton targeted him but tried to protect other young men accused of similar crimes. Donelson, however, would later go back to prison on a different charge.

Rev. Henderson, as Melton introduced him, came into his home with a young man who had recently gotten out of prison, with Melton then lecturing him about staying out of trouble, but they didn't stay long.

Henderson reached out to the JFP to speak on Melton's behalf in the lead-up to his state trial. And he would later write, in a Dec. 28, 2011, handwritten letter requesting clemency from Gov. Haley Barbour for his own crimes, that Melton had made a difference in his life. "I was granted the opportunity to work with the late former Mayor Frank E. Melton by helping organize and hire under-privileged, high-risk youth," Henderson wrote to the governor. 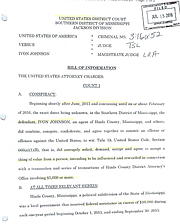 Henderson more recently worked for Melton's long-time friend and defender, Frank Bluntson, as a paid intern when Bluntson was Jackson City Council President, and then ran for mayor. Bluntson had been director of the Hinds County Juvenile Detention Center during a dark time in its history when Melton was accused of abusing young people there, but never arrested for it. Bluntson was a long-time friend of former DA Ed Peters, who later supported first Melton's mayoral candidacy and then Robert Smith's run for DA. After Smith was elected, the FBI captured former DA Peters on a wiretap telling corrupt attorneys that he could help them indict two men in Hinds County who had screwed them over.

"Uh-huh," Peters replied, as reported in Curtis Wilkie's book, "The Fall of the House of Zeus" about the Dickie Scruggs scandal. "In fact, there's a lawyer—the D.A., or the D.A.-to-be. He's got a couple of them he's fixing to do the same thing to—that tried to screw him out of a percentage of fees and things." Wilkie assumed he meant Smith; he had already defeated Peterson in the Democratic primary and was assured of winning the general election in November.

Smith has long denied any wrongdoing on behalf of Peters or others. Peters would later get immunity for admitting that he offered his former assistant district attorney-turned-Judge Delaughter a bribe; the judge went to prison for the felony.

His powerful network may have paid off for Henderson. The names of some of those people would help him clear his record in 2011. "During this time, I established relationships within the community, local law enforcement, city council, state representatives and court municipalities in an effort to improve our neighborhood and our great city of Jackson," Henderson wrote in the handwritten letter to Barbour.

Henderson, who attended Jim Hill High School until the 11th grade, had numerous brushes with the law, his clemency request shows, as do many young Jackson men who are then plagued by criminal records for youthful transgressions. Born April 23, 1972, Henderson came of age into the crack era of the late 1980s and early 1990s. His first conviction was on Sept. 6, 1991, for receiving stolen property, with two more of the same convictions coming on May 26, 1992, and another on Dec. 5, 1997. He was convicted of cocaine possession on May 26, 1992 and Nov. 21, 1997. 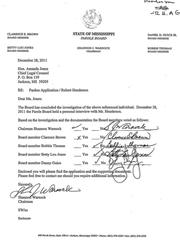 Old Jackson police records show Henderson was arrested for disorderly conduct, auto theft and conspiracy to distribute cocaine, all in the early 1990s. His name also surfaced in other witness statements and police reports, with one witness to an alleged violent crime calling him Melton's "push-along boy" in a deposition, but Henderson was not legally implicated in those instances. That witness later recanted his statement.

Having served his time, Henderson applied for a pardon on Dec. 28, 2011, from the Mississippi Parole Board. Two of the five parole-board members, Shannon Warnock and Clarence Brown, voted to pardon him, but the other three did not. Then, twelve days later, Henderson asked outgoing Gov. Barbour for clemency.

Henderson also drew on his powerful network to support his clemency. Long-time state Sen. Alice Harden wrote Barbour on Mississippi Senate letterhead. "I have known Robert for many years and believe that he is honest, responsible and forthright in his dealings with his family, friends and colleagues," she wrote. "He has demonstrated a high degree of loyalty and trustworthiness to the causes which be believes."

The reverend listed his employer in 2011 as Garrett Enterprises, where he said he worked as a supervisor. His character references were Tyrone Lewis, a long-time Jackson Police Department officer who would soon become Hinds County sheriff and was defeated for re-election earlier this year by Victor Mason (who also helped Melton work with young people, including at a camp in Texas in the 1980s). Henderson had helped organize a fundraiser for Lewis' first run for sheriff at Melton's home in 2007; his name was a contact on the invitation. Then-Sheriff Malcolm McMillin kept his seat then, but Lewis defeated him four years later.

Henderson's other references for clemency included District Attorney Robert Shuler Smith. Henderson listed his defense attorneys as George Holmes, Sam Wilkerson and Sanford Knott, the latter of whom figures prominently in Smith's current battle with the attorney general on behalf of Turner and Butler, whom Knott represents.

Barbour granted clemency to Henderson for his previous convictions, along with a long list of other pardoned criminals, some of whom were brutal murderers and rapists that make Henderson's convictions pale by comparison.

Barbour granted Henderson a "full, complete and unconditional pardon"; the reverend is listed as the last one on the former governor's list of pardons.

Smith and Henderson could not be reached for comment.