Here's A Full List of Barbour's Pardons; What Do You Think? | Jackson Free Press | Jackson, MS

Here's A Full List of Barbour's Pardons; What Do You Think?

Jan. 10, 2011—Click here to read a full list of outgoing Gov. Haley Barbour's pardons, then tell us what you think (and what you know about these folks' crimes!) 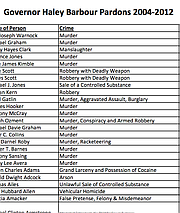 Also, catch up with all Barbour's 2012 (and 2008) Pardongate in the JFP's domestic-abuse archive.

ID
165702
Comment
He pardoned Karen Irby. I'll be damned. It looked for a minute, with Irby's conviction and sentence, as if the rich don't get special treatment. Barbour's pardon throws that silly idea out the window.
Author
Susan Mitchell
Date
2012-01-10T18:17:33-06:00

ID
165705
Comment
Kirby Tate got 60 years in 2003 for selling marijuana to an undercover wire-wearer as a habitual offender, two prior offenses, both related to sale of marijuana less than an ounce. He was holding about 36 lbs. Here's a link to the proceedings: http://courts.ms.gov/Images/Opinions/CO24636.pdf Needless to say, this is a pardon that is probably deserved, 60 years is RIDICULOUS for selling schwag. Thank you, Haley!
Author
newyokel
Date
2012-01-10T19:45:48-06:00

ID
165706
Comment
That does sound like a good one -- although it sure doesn't make up for the bad ones. Maybe he was responding to our calls on Twitter yesterday to pardon some of the folks in there for lesser drug crimes. Once today's wacky dust clears, we'll be analyzing others on the list. But it really helps if y'all post what you know about the cases, sticking to facts, of course.
Author
DonnaLadd
Date
2012-01-10T20:26:04-06:00

ID
165707
Comment
And cheers to everyone who wrote me today with encouragement and to help out. The JFP Nation is the best, especially on big stories like this one. We always appreciate your help and support. It may have taken four years since we first did it, but this story is taking root now, and we need to use it every way possible to raise awareness about domestic abuse. On that note, the 2012 JFP Chick Ball will be organizing in February to raise money and awareness to fight domestic abuse in the state. Write [email protected] to get involved or donate however you can and follow us on Twitter @jfpchickball -- please get your friends and family to as well. We want to have the biggest Chick Ball ever this year. (For those who don't know, so far, we have bought the Center for Violence Prevention a new minivan, provided funds to help woman and children immediate danger, provided the seed money for the area's first batterers intervention program -- to STOP abuse before it gets more violent -- and established a legal fund to help families safely escape the abuse. We will announce this year's focus shortly.) Thanks to you all. Let's do this.
Author
DonnaLadd
Date
2012-01-10T20:29:52-06:00

ID
165711
Comment
It would be helpful to see the entire list updated with either the county where crime took place or the county of conviction. That would aid in finding individuals associated with the names on this list.
Author
Glenda G Johnson
Date
2012-01-11T00:56:56-06:00

ID
165713
Comment
I felt much the same way about Frank Melton, Duan. The only thing I will about either is that both had the mainstream corporate media covering for them until way too late in the game. That's not an excuse, but it is a sad fact. Glenda, we are starting to sort through the list, but even though we're the Little Newspaper That Could, we are a small staff. Anything you folks in the JFP Nation can do to help us sort through details on the people on the list would be great. Feel free to post FACTS (not innuendo; not that kind of site) or send directly to me at [email protected] Feel free to post links to other media or send them to me. Unlike most other media outlets in the state, we're happy to give credit to other media for what they do well. It's the ethical thing to do. For the folks on the list, I'd like to know circumstances and date of crime; location; race (some folks are asking to know the racial breakdown); how long served -- anything else? Thanks, all. Our readers have really come together over this story, and we're hearing from people all over the country about how impressed they are both with Ronni and Sophie's 2008 investigation and how many smart Mississippians they see speaking out (I know; they're bigoted against us, but folks like Haley Barbour and their shenanigans on behalf of Mississippi don't help; neither does him drawing a 60 percent approval rating, making folks think most of us think like he does. We have to show the world the new Mississippi. Step up, all!)
Author
DonnaLadd
Date
2012-01-11T10:00:55-06:00

ID
165720
Comment
The ones we reported about in 2008 were already out of jail, Bubba (they're on this list, too). Not sure about others, but working on it. It does leave an intriguing legacy behind, eh, Jeff? Maybe he thought because the mainstream media int he state virtually ignored it in 2008 that it wouldn't matter this time, either. Or, for some reason, he thought he didn't have a choice. I'm puzzling over the "why" myself.
Author
DonnaLadd
Date
2012-01-11T15:47:16-06:00

ID
165721
Comment
Donna, I suppose so, but to issue so many is disgusting and seems criminal in itself. He surely didn't investigate each and every one to determine the merits for a pardon, which is a slap in the face of the legal system, the victims and their families(particularly for the murderers), and honest law abiding citizens who care about justice.
Author
Jeff Lucas
Date
2012-01-11T16:09:23-06:00

ID
165724
Comment
Barbour released a statement that 90% of the people he pardoned were already free. http://www.wdam.com/story/16501321/former-gov-barbour-issues-statement-regarding Got no problem with that,most have done their time or been paroled. But to let murders and child molesters out early,he shouldn't have done that. No way in hell should any gov. be allowed to do that.
Author
BubbaT
Date
2012-01-11T18:49:37-06:00

ID
165725
Comment
I've heard that's true, Bubba. We're still working on confirming the circumstances of the various ones. It took us days of digging to figure out circumstances of the four domestic murderers he pardoned in 2008. But I do know that none of those trustys who killed wives and girlfriends are dead. Neither is at least one of the sexual predators. Will let you know about others as we figure it out.
Author
DonnaLadd
Date
2012-01-11T20:43:09-06:00

ID
165727
Comment
This was part of a larger machination. You guys know Barbour. He didn't do this for no reason. Whether it was to harm the RNC for the slap they have him about Personhood or he released a larger number to cover up a few he didn't want looked at too heavily. There is a larger picture here. One thing Haley ain't is stupid. I think we need to look at it with an extremely wide lense. (With one eye, while we keep the other eye on the MS leg.)
Author
Lori G
Date
2012-01-12T10:12:44-06:00