Lawmaker Who Called for Lynching of Confederate Statue Foes Elevated 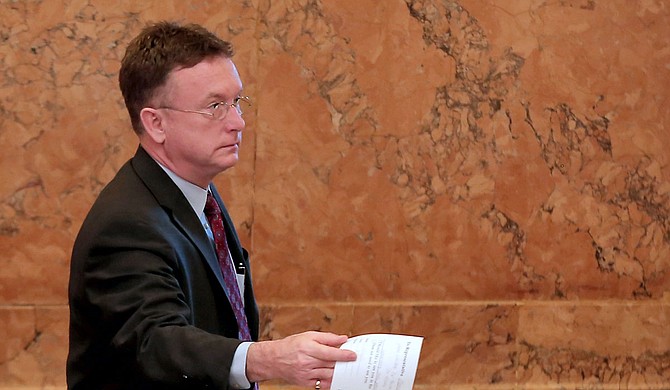 Mississippi House Rep. Karl Oliver will become the chamber's new Appropriations Committee vice chairman, despite his prior calls for leaders in Louisiana who support removing Confederate monuments to be "LYNCHED!" Photo by Imani Khayyam

Mississippi House Rep. Karl Oliver, a funeral director from Winona, will take on a new role as vice chairman of the powerful House Appropriations Committee. The Republican lawmaker's promotion comes despite a Facebook comment he made in 2017 in which he wrote that state leaders in Louisiana deserved to be "LYNCHED" after New Orleans city leaders removed a number of Confederate monuments from public display.

"If the, and I use this term extremely loosely, 'leadership' of Louisiana wishes to, in a Nazi-ish fashion, burn books or destroy historical monuments of OUR HISTORY, they should be LYNCHED! Let it be known, I will do all in my power to prevent this from happening in our State," Oliver wrote on May 20, 2017.

Speaker Gunn Appointed Oliver, Whom He Once Condemned

The house speaker condemned Oliver's remarks in 2017, saying they "do not reflect the views of the Republican Party, the leadership of the House of Representatives, or the House as a whole."

"Using the word 'lynched' is inappropriate and offensive. We call on Rep. Oliver to apologize," Gunn said at the time.

In 2017, the Jackson Free Press noted that Read was one of two Republicans who "liked" Oliver's Facebook post; the other was Rep. Doug McLeod, whom a judge acquitted last year on a domestic violence charge accusing him of punching his wife.

Amidst an avalanche of backlash, Oliver said in 2017 that he wished "to extend (an) apology for any embarrassment (he had) caused to both my colleagues and fellow Mississippians." He acknowledged that using "the word 'lynched' was wrong," but said he only made those comments because he was so "passionate" about defending his "preserving all historical monuments."

That apology only came after his Facebook post drew nationwide outrage and numerous calls for his removal. Days after Oliver's post, then-New Orleans Mayor Mitch Landrieu, who is white, gave a nationally-broadcast speech explaining his decision to take down those monuments to the Confederacy.

"These statues are not just stone and metal. They are not just innocent remembrances of a benign history," Landrieu said. "These monuments purposefully celebrate a fictional, sanitized Confederacy; ignoring the death, ignoring the enslavement and the terror that it actually stood for. ... They were erected purposefully to send a strong message to all who walked in their shadows about who was still in charge in this city. "

Six months later, in November 2017, New Orleans voters elected LaToya Cantrell, who is black, as the first woman to serve as mayor.

In a special session of the Legislature a month after Oliver's remarks, in June 2017, black lawmakers took the podium to demand Oliver's resignation.

"I rise today out of sheer anger that a member of this body felt the need to chastise members of another state Legislature because they felt what they were doing is right," said Rep. Chris Bell, D-Jackson, who called Oliver's apology "garbage."

Oliver's lynching comment also drew a rebuke from the NAACP Legal Defense Fund, which pointed out that "he not only called for the murder of public officials," but "explicitly raised the ugly history of racial violence in America" with his use of the word "lynching."

Despite the condemnation, though, Oliver ran unopposed for re-election in the 2019 Republican primary, and did not face a challenger, Democratic or otherwise, in the November general election.

Just a year-and-a-half after Oliver's lynching remark, another top Mississippi Republican would draw national—and international—headlines with her own comment about lynchings.

"If he invited me to a public hanging, I'd be on the front row," U.S. Sen. Cindy-Hyde Smith, who attended a segregation academy in the 1970s, said cheerfully at a Tupelo campaign stop, while referring to a supporter she particularly liked. At the time, she was running against Democrat Mike Espy, who would have been the first African American senator from Mississippi since 1881 if he had won; he is challenging her for a rematch in 2020.

Hyde-Smith defended herself, saying it was a "term of endearment," not a reference to racist lynchings. That term, it turned out, was commonly used during the era between the end of the Civil War and mid-20th century—a time when Mississippi had the highest rate of lynchings of African Americans in the country.