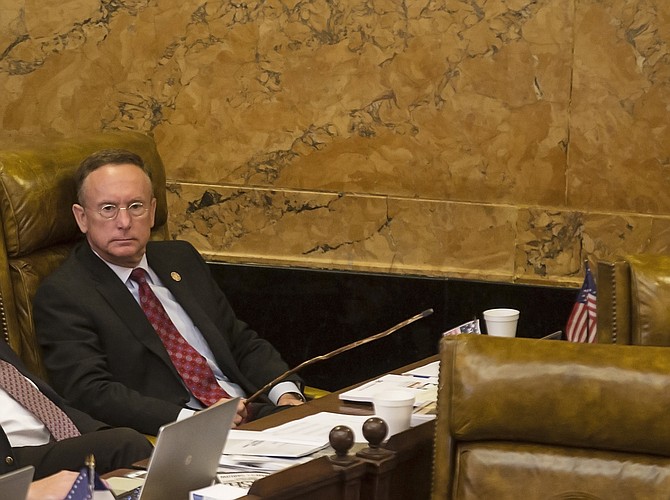 Rep. Karl Oliver, R-Winona, avoided reporters' questions and never took a point of personal privilege to apologize from the House floor for his lynching comments posted on Facebook last month, which he eventually took down, apologizing in a written statement. Photo by Imani Khayyam.

Technically, the Mississippi House of Representatives had finished its business, passing the remainder of special-session legislation, but the tension in the chamber reeked of unsettled, unfinished business.

It was almost 9 p.m., and several members of the Mississippi Legislative Black Caucus were prepared to take action, after Rep. Karl Oliver, R-Winona, did not go to the podium himself to apologize, and several resolutions calling for his resignation died in committees early on Monday.

Rep. Chris Bell, D-Jackson, took the podium first, and House Speaker Philip Gunn, R-Clinton, told representatives to return to their chairs. The chamber fell deathly silent, as he began. "I rise today out of sheer anger that a member of this body felt the need to chastise members of another state Legislature because they felt what they were doing is right," Bell said.

Oliver, who made national headlines in late May after calling for the lynching of leaders who want to bring down Confederate monuments in New Orleans, sat in his chair, located to the far right and front part of the House chamber, from Bell's point of view.

Bell went on to say that Oliver has not once spoken to him in their now two sessions serving in the same chamber. "He has not had the guts to walk up to this well and apologize," Bell said.

Oliver was at his desk during most of the special session, holding a stick, with colleagues surrounding him throughout the day. Earlier Monday, when the Jackson Free Press asked Oliver if he wanted to respond to calls for his resignation, he shook his head "no." Then when asked if he would take a point of privilege to speak at the front of the House, he also shook his head, saying "no." He never did.

Rep. Bell went on to say he felt Oliver's apology was "garbage," and he discussed the significance and divisiveness of symbols like Confederate monuments and the Mississippi state flag.

Once Bell finished, Rep. Jeramey Anderson, D-Escatawpa, filed a resolution to urge the House of Representatives to expel Karl Oliver as a member of the House and asked Speaker Gunn for a vote to suspend the rules to take it up.

The motion to suspend the rules, which required a two-thirds vote, failed with 66 against and 32 in favor. Twenty-one members, including a few black lawmakers, Democrats and Republicans, were either absent or did not vote. Most Republicans voted no.

After the vote failed, 10 more members of the Legislative Black Caucus took to the podium to speak, some looking Oliver right in the eyes as they told stories of family members who had been lynched and explained the horrors of such terrorism in the history of African Americans in the nation and in Mississippi.

Oliver reportedly made individual apologies to some black lawmakers, including Rep. Oscar Denton, D-Vicksburg, who got up and spoke at the well for the second time in his legislative career.

Rep. Sonya Williams-Barnes, who chairs the Legislative Black Caucus and had filed a resolution earlier in the day to urge the House to expel Oliver, told the House that someone had ripped up a paper copy of her resolution and left it on her desk earlier that day.

"Today, in this House, there was a coward who was not brave enough to face me face-to-face, but you took the resolution that I proposed that did not make it out of the committee because the committee didn't meet, and you tore it into small pieces and left it over on my desk," Williams-Barnes said. "Be a man; be a woman. I am woman enough to stand here and tell you about my resolution—you do the same."

"Certainly, the apology that he gave doesn't repair the comments that he made or the language he used," Simmons told reporters outside the Senate chamber. "To use the term 'should be LYNCHED,' which is a criminal act as you all know, is irreversible."

Simmons said several Republicans told him privately that they believe the right thing for Oliver to do is resign from his post, but no member of the party publicly expressed such sentiments on Monday.

"It would be a great help to the Mississippi Legislature and the state of Mississippi if we don't make this a bi-partisan issue, and if we could come together and sing the same tune and say the language used by Rep. Karl Oliver is not a Democratic issue or a Republican issue—it's a human-rights issue, it's a Mississippi issue," Simmons said.

After an hour and a half of an almost-silent House chamber listening to black lawmakers express their frustrations and tell their stories, the House wrapped up business just before 10:30 p.m. Speaker Gunn, who stood at attention with Speaker Pro Tempore Greg Snowden, R-Meridian, as the legislators spoke, thanked the House for how they handled the special session and the time spent afterward.

"I do appreciate the heartfelt speeches and the heartfelt, positive manner in which we carried out our business, " Gunn said.

Rep. Oliver left the chamber quickly before reporters could get his response.