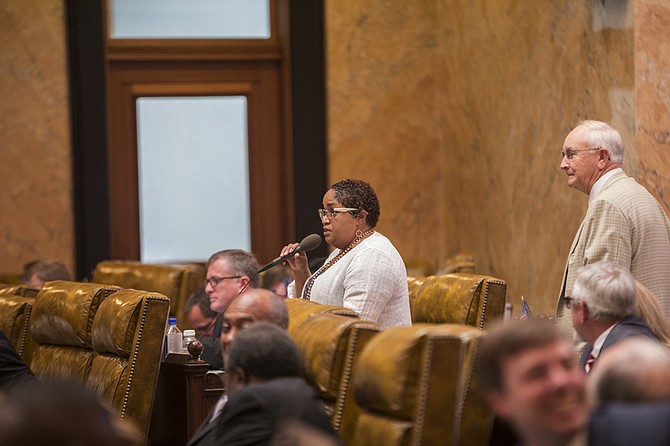 The Mississippi Legislative Black Caucus still plans to boycott the Southern Legislative Conference, which the state is hosting and House Speaker Philip Gunn chairs, in protest over the state flag. Photo by Imani Khayyam.

JACKSON — Most Republican leaders have distanced themselves from Rep. Karl Oliver, R-Winona, who made national headlines for a Facebook post that called for the lynching of leaders in Louisiana who support the removal of Confederate monuments, but the fight to change the state flag continues.

Oliver's Monday apology was not good enough for the Mississippi Legislative Black Caucus. The group called for Oliver's resignation following his Facebook post, saying Oliver's statement and the Confederate symbol on the state flag "go hand-in-hand in sending the message that all are not welcome."

"Changing the flag is a direct action moving in the right direction as a collective body, and it is the right thing to do. An apology is just mere protocol; it is not enough," the MLBC statement said. "If these comments are truly not the mindset of the body, change the flag and demand the resignation of Karl Oliver."

The MLBC announced early in May that it would boycott the Southern Legislative Conference due to the state flag. The conference is in Biloxi this summer, and House Speaker Philip Gunn, R-Clinton, is the 2016-2017 chairman of the SLC. The Mississippi Legislative Black Caucus called on other African American lawmakers to consider not attending the conference to support the struggle.

"We've received calls from legislators from Georgia, South Carolina, Alabama, Louisiana, Tennessee, all stating that they don't plan to come, and they are standing with us in our efforts to change the state flag," Rep. Sonya Williams-Barnes, chairwoman of the MLBC, told the Jackson Free Press.

Gunn, who has said publicly that the state flag should change, told reporters Monday that he continues to have discussions with leaders from the caucus to convince them to attend the conference.

"I am the only Republican leader who has come out, I think, at least as vocal as I've been, about changing the flag, and my hope would be that, you know, they would say, 'We're coming because you are the one who said you were going to change the flag, not we're not coming because you were the one who said you'd change the flag,'" Gunn said at the Stennis Capitol Press Forum on Monday.

The Mississippi flag debate flared in the latest legislative session, when Rep. William Shirley, R-Quitman, added an amendment to a public university bond bill that would require public colleges in the state to fly the state flag to receive state funds. The amendment passed by one vote, but the bill died.

When Shirley introduced the amendment on another bill, his attempt was thwarted again. Eventually, he took the podium for a point of order and, saying nothing, waved a miniature white flag in apparent surrender, although he would not talk to reporters afterward to confirm what his gesture meant.

Gunn reiterated this week that he has been in favor of changing the state flag for two years, but said he does not have the votes to pass a bill to do it.

"There weren't enough votes on either side to do anything... (But) we're not in session right now," Gunn said at the Stennis Capitol Press Forum. "There's nothing we can do right now, and the governor is not going to put it in a special-session call, so you know, there's just nothing that can be done for a moment in the way of taking any official action."

The Mississippi Legislative Black Caucus has said its boycott is not an attack on the speaker or the Southern Legislative Conference. "We are using SLC as an opportunity to bring attention that Mississippi still holds a flag that embeds the Confederate emblem," the May 1 press release from MLBC says.

Biloxi, where the SLC is scheduled for late July, is having its own flag debate after Mayor Andrew "FoFo" Gilich ordered the state flag removed from all of that city's facilities. This week, the city council there voted 6-1 in favor of asking Attorney General Jim Hood to weigh in on the flag issue, the Sun Herald reported.

Read more about the state flag debate and Confederate history at jfp.ms/slavery.