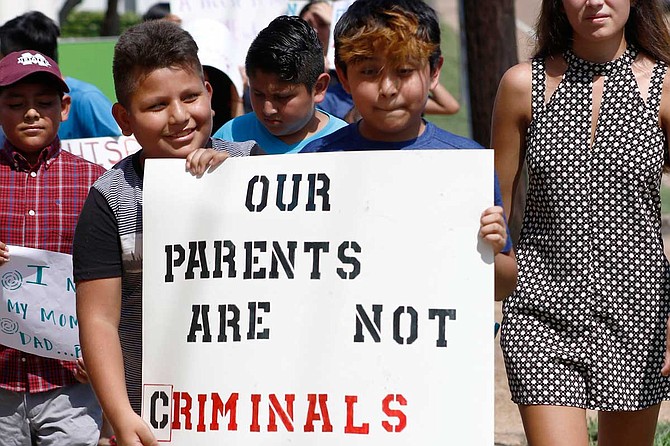 Children of mainly Latino immigrant parents hold signs in support of them and those individuals picked up during an immigration raid at a food processing plant, during a protest march to the Madison County Courthouse in Canton, Miss., on Aug. 11, 2019. Photo by Rogelio V. Solis via AP

Last week, I picked up a two-minute voicemail from a man named "Robert" who wasn't pleased that our 36-page print edition of the Jackson Free Press talked about the recent ICE raids in Mississippi on three pages. The cover package was our annual 2019 college-football preview, which covered six pages including advertising related to football.

How dare we include reporting on the ICE raids, and immigrant children crying, in the same issue as football, he contended.

In fact, he said, we should just leave politics out of the issue altogether. (The same issue had a four-page spread on the primary run-offs including a voter's guide.)

"It would really be nice if you'd cover the football and leave the politics out of it," he said as if he was talking to a child used to being scolded. "If you want to talk about politics, tell both sides of the story. Don't just tell the part about the illegals and how sad it is to see the children crying. Nobody wants to see the children crying, but they're stealing people's identities, stealing people's jobs, and it's just not right."

By the end of the message, however, it turned out that "Robert" is not, in fact, against politics in media—just the kind he doesn't agree with.

"So, y'all need to quit this damn liberal crap and start doing fair news," he explained. "Just like Donald Trump said, y'all ain't nothin' but a bunch of fake news. And don't feel bad because Channel 16, 3, 12, they all do the same thing. I watch Fox News, and I hear the truth, and then I watch my local news, and I hear all these lies."

Apparently, not mixing football with reporting on ICE raids is the only way to keep "Robert," whom I'm guessing isn't exactly a regular reader of my award-winning newspaper, as a reader.

"I just wanted to let you know that. If you want me to read your paper in the future, uh, you need to leave the politics out of it," he declared. "Stay with the football preview. Now if you want to cover politics in another issue, that's fine. But when I pick up an issue to read about football, that's what I expect to read about."

"Robert" ended his message by offering to further explain his desires to me and gave me his phone number. "You people are ruining everything for everybody. I just wanted to let you know how I felt about it. If you'd like to call me back, I'd be more than happy to talk to you," he offered.

I didn't call him back.

Want to hear more callers to the Jackson Free Press? Hear one from a gentleman caller complaining that we cover black Mississippians too often. And in this one, a woman offers to buy a black columnist, then a teenager, a "plane ticket back to Africa."