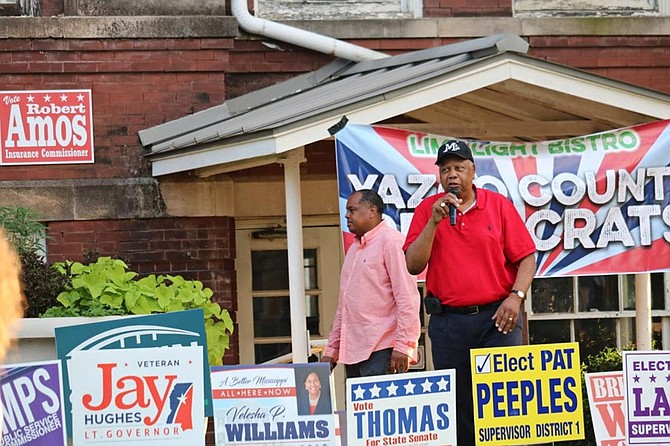 Democrat Joseph Thomas narrowly won the Mississippi Senate District 22 race on Tuesday night after a court ordered it to be redrawn, finding that it amounted to an illegal racial gerrymander meant to dilute black voting strength. Courtesy of Joseph C. Thomas for State Senate.

Even as Republicans swept statewide offices in Mississippi on Tuesday night, Joseph Thomas, an African American Democrat in a district that stretches across six counties, narrowly ousted a Republican incumbent. Earlier this year, a federal court forced the GOP-led Legislature to redraw the boundaries for that district, Senate District 22, after finding that they had drawn it in a way that was intended to dilute black voting power.

"It was an exciting race. We did our best and we came out victorious. We're excited to serve all the citizens of District 22," Thomas told the Jackson Free Press Thursday morning, saying he wants to focus on job creation, advocating for the elderly, and working as "a champion for our schools."

When Judge Carlton W. Reeves ruled earlier this year, the district's population was 51% black, and GOP Sen. Buck Clarke, a white man, represented its residents in the upper legislative chamber. But the 100-mile-long district was comprised of black voters who were poorer on average than those throughout the state and white voters who were wealthier than average.

In his February ruling, Reeves pointed to 2010 Census data that showed Mississippi is 59.1% white and 40.9% non-white. Based on that data, he wrote, "one might have expected" redistricting to result in a Senate comprising about 31 white senators and 21 non-white senators.

"But there are only 15 majority-minority Senate Districts, and the Senate has never had more than 13 African-American members," Reeves wrote. "In plain English, Mississippi's Senate is much whiter than Mississippi."

Statewide, about 13% of white Mississippians live below the federal poverty line, but among white residents of the Senate District 22 map that Reeves struck down, fewer than 9% do. While 32% of African Americans live in poverty statewide, that number was 41% in Clarke's district.

In general, voter-turnout rates are the lowest among the poor and those with less education. In District 22, that resulted in a large gap in turnout, with white turnout 10.2 points higher than black turnout.

Thomas, who previously served as a Mississippi senator in the 2000s, was among several black plaintiffs in the case. He challenged Clarke in 2015, after the 2012 map went into effect, but lost by eight points.

During federal-court arguments at the Southern District of Mississippi in February, Maxwell Palmer, a political scientist at Boston University, testified that District 22 would need a 62-percent black voting-age population in order for African Americans to have a "realistic opportunity" to elect their candidate of choice.

As the legislative session came to a close in March, the Senate passed a new map which traded some voters between Senate Districts 13 and 22, boosting Thomas' district from 51% to 57% black. On Tuesday, the Democratic senator-elect overcame Maxwell's estimate, beating Republican nominee Hayes Dent by about 52% to 48%.

"You can see it was a tight race. It still was tight even with the numbers being like they were," Thomas told the Jackson Free Press on Thursday morning.

Dent is a former Republican strategist who worked with an organization called the Southern Strategy Group, and more recently worked behind the scenes for Tony Yarber's campaign for mayor in 2014. Yarber then nominated him as the City of Jackon's lobbyist.

During the campaign, the Florida-based political organization U.S. Term Limits sent mailers out to voters in District 22. With a bayou as its background, the mailer prominently featured Thomas' face beneath the words, "Wanted: Swamp Creature." Many white Mississippians have historically compared African Americans to animals.

Mississippi politicians, like Gov.-elect Tate Reeves, have often been accused of sending out mailers with images of black opponents--or else photoshopping white opponents alongside well-known non-white Democrats--as a dog whistle to racist white voters.

Dent, though, denied any affiliation with the group behind the mailers in an October tweet. U.S. Term Limits describes itself as a "non-partisan" organization that wants to limit the amount of time politicians can serve in Congress and state legislatures. Its chairman, though, is Howard Rich, a libertarian real-estate investor who supports right-wing causes like school privatization.

In 2008, the New York Times reported that Rich sent out 11,000 letters to people who had donated to Democratic U.S. Senate candidates.

"Your name has been put into our database," Rich wrote. "We are monitoring all reports of a wide variety of leftist organizations. As your name appears in subsequent reports, it is our intent to publicize your involvement in your local community. Should any of these organizations be found to be engaged in illegal or questionable activity, it is our intent to publicize your involvement with those activities."  Rich told the Times that he sent the letter in retaliation for a similar series of letters that Democratic groups had sent.

Colton Thornton, one of Thomas' Democratic primary opponents, sent a copy of the group's mailer about Thomas to the Jackson Free Press in October, and took to Twitter to defend Thomas--and to point out the long history of racist depictions of African Americans as animalistic.

"I challenge Mr. Thomas' opponent @HayesDent1 to condemn the language in this hit piece. Prove to the people of Senate District 22 (who are majority African-American) that you will stand against this behavior," Thornton tweeted on Oct. 24, before the election.

Dent wrote back, saying he had no part in the mailer and that he had "already let Joseph know I condemn this sort of politics" and that he and Thomas have "been friends longer than you've been alive" (Thornton is in his early 20s). Still, though, Dent wrote that could not understand why Thornton "felt compelled to bring up race in a political mail hit piece about term limits."

"Walk me through why this is needed?" Dent wrote.

"If you know Mississippi history and you don't see the issue with comparing black people to animals, you're unfit for office," Thornton shot back. 'It's Still Mississippi'

Last year, Thomas' son, Joe Thomas, Jr., talked about the constant current of race in Mississippi when they interviewed him for a story about the U.S. Senate special election to fill the seat that former GOP Sen. Thad Cochran vacated when he retired. In that race, former U.S. Secretary of Agriculture Mike Espy, a Democrat from Yazoo County, faced two Republicans: Republican U.S. Sen. Cindy Hyde-Smith, whom Gov. Bryant appointed to fill the seat in the interim, and Republican Mississippi Sen. Chris McDaniel, who used the Mississippi State Flag prominently in his campaign materials, complete with its Confederate imagery.

"Mississippi politics is black and white. Nobody will come out and say that, but everybody knows it," Joe Thomas Jr., told the Post. "We're 50 years removed from the civil rights movement, but it's still Mississippi."

"If he invited me to a public hanging, I'd be on the front row," she said, praising a supporter with a saying that was used in the South when lynchings were common, but had long since fallen from common usage.

Next year, Republicans will control all eight statewide offices for the first time since that era, after longtime Democratic Attorney General Jim Hood lost the governor's race to GOP Lt. Gov. Tate Reeves. As lieutenant governor, Reeves presided as president of the Mississippi Senate in 2012, when it drew the racially-gerrymandered Senate District 22 map that Judge Reeves struck down earlier this year.