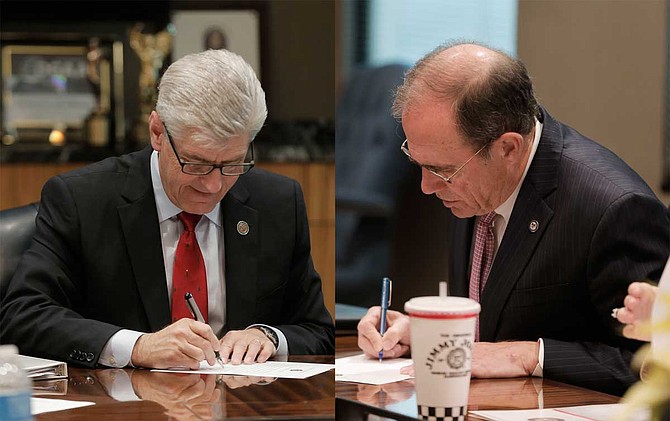 JACKSON—Mississippi Republican leaders are fighting a court ruling that would increase black voting power in a gerrymandered state Senate district that meanders about 100 miles from Cleveland in the Mississippi Delta down into Madison County just north of Jackson.

Republican state leaders are asking the 5th U.S. Circuit Court of Appeals today to reverse U.S. District Court Judge Carlton Reeves' February ruling that the Mississippi Legislature must redraw the Senate District 22 map to increase black voting power because it is a clear racial gerrymander. Though the Legislature already approved a new map in February, Mississippi Gov. Phil Bryant and Secretary of State Delbert Hosemann, both Republicans, are asking a three-judge panel at the appeals court in New Orleans to reverse Reeves' decision.

One 5th Circuit judge made her position on the case clear months ago, though, just after two of the judges on the panel refused Mississippi's request to stay Reeves' order. Judge Edith Brown Clement, an appointee of Republican President George W. Bush, wrote in her dissent that Joseph Thomas, one of the plaintiffs, is "a black Democrat" who is "trying hard to get his seat back." She also accused Reeves of writing a ruling that is "narrowly tailored to win Thomas the election."

Clement wrote that Mississippi would have won on appeal at the 5th Circuit if it had not "had the poor luck of drawing a majority-minority panel." Presumably, she was referring to the fact that Democratic appointees were a majority on the panel even though they are a minority on the overall 5th Circuit. Democratic presidents appointed the two other judges on the panel.

"I have never seen a judge, federal or state, write an opinion as overtly partisan as hers," Rep. David Baria, the Democratic House minority leader, told the Jackson Free Press after her dissent in March.

The 5th Circuit hears cases originating in Mississippi, Texas and Louisiana. It is composed of 17 judges, but a panel of just three hears each case.

Senate District 22 stretches 100 miles across six counties and has a 51% African American majority, but a white Republican senator, Buck Clarke of Hollandale, represents the district, which includes all of Sharkey County and parts of Bolivar, Washington, Humphreys, Yazoo and Madison counties.

When the Legislature drew the contested map in 2012, it created a district of white voters who are significantly wealthier than the average white Mississippian and black voters who are significantly poorer than the average black Mississippian. Statewide, about 13% of white Mississippians live below the federal poverty line, but among white residents of Senate District 22, fewer than 9% do. While 32% of African Americans live in poverty statewide, that number climbs to 41% in Clarke's district.

During legal arguments at the U.S. Southern District of Mississippi in February, Maxwell Palmer, a Boston University political scientist, testified that District 22 would need a 62% black voting-age population in order for African Americans to have a "realistic opportunity" to elect their candidate of choice. Under Reeves' order, the Legislature approved a new map in March, boosting the district's African American population to 58%.

In his ruling, the judge wrote that, across the state as a whole, "Mississippi's Senate is much whiter than Mississippi."

"The 2010 Census data showed that Mississippi was 59.1% white and 40.9% non-white," he wrote. "After redistricting with these data, therefore, one might have expected fresh maps to result in an upper legislative chamber with something like 31 white Senators and 21 non-white Senators. But there are only 15 majority-minority Senate Districts and the Senate has never had more than 13 African-American members."

On Tuesday, the state Senate approved a new map, which would only affect District 22 and the neighboring Senate District 13. If the House also passes the Senate's redistricting plan, it would go into effect before this year's statewide elections.

In January, former U.S. Attorney for the Southern District of Mississippi Brad Pigott told the Jackson Free Press that the Mississippi Legislature has a long history of racial gerrymandering.

"Back in the segregation days, the state Legislature drew east-west lines to split up the Delta in the event that there was ever something like a Voting Rights Act, in which large numbers of African Americans got the right to vote," he said. "So they wanted to intentionally divide the Delta in order to stop any African American progress."

At the time, Pigott was looking at ideas for a 2020 state ballot initiative that could have updated the state constitution to implement new restrictions on gerrymandering. Pigott said he had reached out to former U.S. Attorney General Eric Holder. He decided not to, though, due to a lack of resources necessary to gather the more than 86,000 signatures required to launch a ballot initiative.