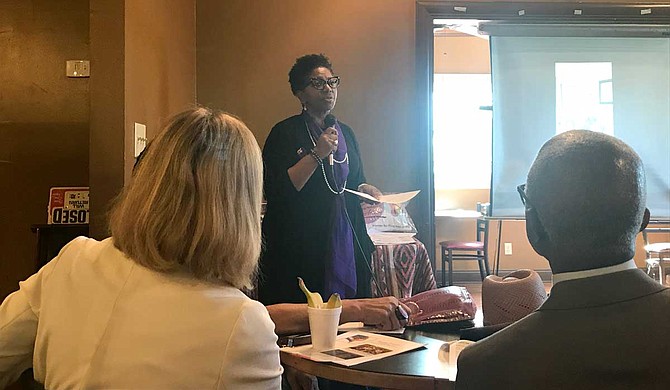 Willie Jones, president of Women for Progress, speaks to an audience at the Refill Cafe about dispeling voter apathy and reforming the voting process in Mississippi. Photo by Aliyah Veal.

JACKSON—People filled every seat in Refill Cafe on May 17 as Willie Jones, president of Women for Progress, held an open forum to discuss solutions to combat voter apathy and reform the voting process in Mississippi.

"Our goal is to empower those who are registered to vote," she told the audience.

Voter apathy is the lack of interest in election participation from certain groups of people, which can result in low voter turnout. In the last presidential election, Mississippi's voter turnout was down, with almost 300,000 eligible voters opting not to vote.

"We know that we have a lot of voters who are registered to vote that don't go to the poll in the elections," Jones told the Jackson Free Press. "(There are) a lot of different reasons for that. They're dissatisfied with the political process, (or) they're not excited about the candidates that are on the ballot, just various things."

However, Mississippi set a midterm turnout record in last November's U.S. House and Senate elections, propelled by the high-profile special election that pitted incumbent U.S. Sen. Cindy Hyde-Smith, a Republican, against Democratic challenger Mike Espy, who served as U.S. Secretary of Agriculture during the Clinton administration.

Data from The National Conference for State Legislatures and the Brennan Center for Justice shows that Mississippi is the only state with no pro-voter reforms.

Part of the solution, Jones said, is making leadership accountable for reforming the voting process in Mississippi. She added that educating voters is also key to increasing voter participation.

"We have to educate voters on the issues that are impacting our community," she said. "We have to help them connect the dots because a lot of times when we say voters are not going to the polls, it's because they are not informed on the issues."

She emphasized the need to target young voters, whom she said are not going out to the polls as much as those over the age of 50. She said that there are not enough efforts to engage younger would-be voters.

"I want to know what young people think about these issues. What should be our priorities that (are) impacting them?" she said. "And then for us as leaders in the over 50, we need to ask them, 'What do you want us to do? How do you want us to move?'"

His mother and aunt, who live in Queens, New York, have a week and a half to vote, he said. He believes that Mississippi could use some progression in voting options.

In light of the upcoming election year, Jones said Women for Progress will host forums and town halls with different candidates and legislators to encourage voter participation.

"We've got to dispel the myths," she said. "We have to make sure every single person is counted," she said.

In 2011, Mississippi passed a voter ID law requiring residents to show photo ID before voting, which opponents said could keep poorer populations who are less likely to have ID from voting. Mississippians can, however, go to their local circuit clerk's office to obtain an ID they can use to vote.

Voters must register a month before the election and bring a valid form of photo ID, such as a driver's license or student ID, with them to the polls in order to vote. For a full list of acceptable forms of ID, visit msvoterid.ms.gov. Polls are open in Mississippi from 7 a.m. to 7 p.m.