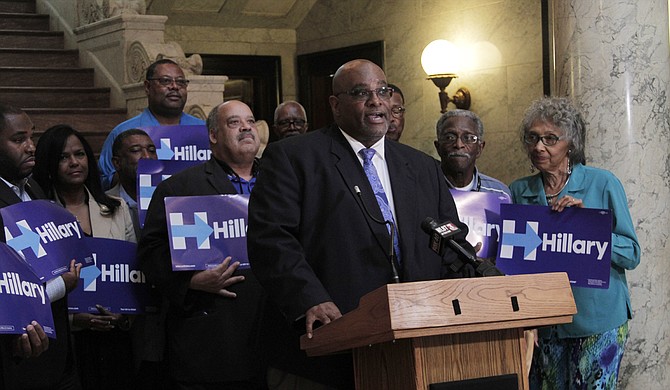 Rep. John Hines, D-Greenville, encouraged voters from all over the state to get out to vote and help turn Mississippi from red to blue. Photo by Arielle Dreher.

JACKSON — Members of the Legislative Black Caucus are encouraging Mississippians to vote on Nov. 8, not only in the presidential contest but for the sake of other races on the ballot.

Caucus chairwoman Rep. Sonya Williams-Barnes, D-Gulfport, pointed to 2011 when the Democrats lost control of the Mississippi House of Representatives. Her message was that voters need to turn out in every election to avert catastrophe.

"This led to many things that we are suffering from today, like not expanding Medicaid, closure of different agencies within the state, and so we're encouraging Democratic members of our state, to get out and vote," Williams-Barnes said on Friday.

"The surge in requests is a good indication turnout may reach 2012 levels—or beyond," Secretary of State Delbert Hosemann said in a press release Friday. "When more Mississippians participate in elections by taking the time to cast a ballot, the entire nation wins. Our United States began with the right to cast our ballots and will be maintained by casting our ballots on Election Day."

Rep. John Hines, D-Greenville, encouraged the state's African American voters to help turn the state from red to blue on Friday, citing the struggle for voting rights in past decades.

"For many years people gave their lives, their hard-earned money, and time to ensure that African Americans have a part in this state and this country, and we're here to encourage us to turn this state from red to blue," Hines said.

Rep. Alyce Clarke, D-Jackson, the first African American woman to serve in the state Legislature, stressed the importance of voting and said she thinks that Mississippi can at least turn purple. Clarke said she is not just voting for Hillary Clinton because she's a woman.

Lawmakers stressed that the election will not be rigged, echoing what Hosemann has also said leading up to Nov. 8.

The deadline to vote in-person by absentee ballot was Saturday, and mailed absentee ballots must be received by 5 p.m. tonight. Polls are open from 7 a.m. to 7 p.m. on Tuesday, Nov. 8. Voters must bring a valid form of voter ID with them to their polling place. You can find your polling place online at the Secretary of State's website.

Email state reporter Arielle Dreher at [email protected] and follow her at @arielle_amara on election night for updates.