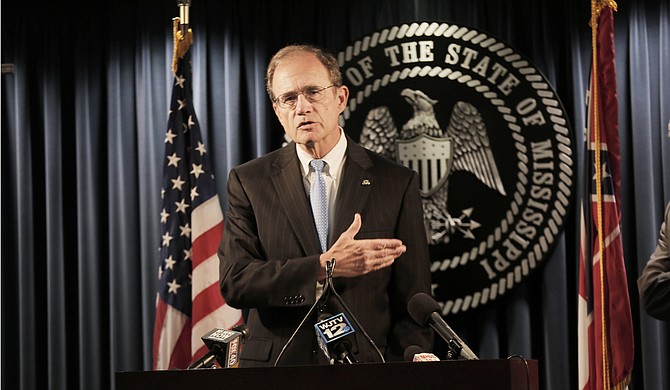 Secretary of State Delbert Hosemann announced a new part of the SOS website that will enable Mississippians to register a change of address online, find their polling place and find the necessary voter registration forms. Photo by Imani Khayyam.

JACKSON — With the presidential election drawing near, Mississippians who are registered to vote can change their addresses up until the day before the election due to new rules the Mississippi Legislature passed last session.

Before, when Mississippians moved, changing their addresses could require multiple phone calls and trips to the circuit clerk's office. Mississippians can now change addresses online, which is important because addresses determine poll locations and specific races for voters. If someone plans to change their address after Oct. 8, they will still need to contact their circuit clerk but should be able to vote by affidavit ballot in their new ward.

Secretary of State Delbert Hosemann launched a new page Sept. 14 called "Y'all Vote" on his office's website. It is an information hub for voters and a place to print out forms to register or get a voter ID.

House Bill 809 allows voters to change address up until the day before the election, eliminating poll-book confusion. Sen. Sally Doty, R-Brookhaven, a lawmaker who worked on the bill, said the new tool will make voting more convenient for Mississippians. 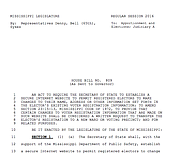 "I think this will really help with some frustration that occurs on voting day," Doty said at a press conference. "I know I usually field a lot of calls on voting day, when people call and say, 'Where's my precinct? They don't have me on the list."

Approximately 2.26 million of Mississippi's 2.99 million people are eligible to vote, U.S. Census Bureau data show. There are 1,843,154 active registered voters with the SOS, or about 82 percent of those eligible. Hosemann and Gov. Phil Bryant said it was their goal to register the other 20 percent of Mississippians in the coming weeks.

"We're looking for that other 20 percent that may have the good sense to move to Mississippi," Hosemann said. "We want them to register to vote."

Bryant declared September "National Voter Registration Month" in the state and said the new Y'all Vote site should make it easier for first-time voters to navigate the process, with its polling-place locator and voter ID guidelines.

Of the eligible voters, U.S. Census data show that 60 percent are white, 35 percent are black, and 2.6 percent are Hispanic. Mississippi voters have lower average educational attainment and median household income than U.S. voters on average.

While voter turnout has seen record highs in recent years, Mississippi's voter ID law adds another step for those looking to register. When Mississippians head to the polls Nov. 8, they must have a form of ID with them, such as a driver's license, a government issued ID, a student ID or military ID. Anyone without one of those IDs can register for a Mississippi Voter ID Card.

Hosemann, who led the campaign for voter ID in Mississippi in 2011, continued to sell the voter ID requirement last week, saying it encourages more people to vote.

"Every other state got sued but us," he said. "What we found was, with all due respect, we didn't disenfranchise anybody. What we did was enfranchise people—people who had never had an ID and may have been discouraged from voting in Mississippi—but no longer."

Hosemann said his office has issued about 5,000 voter ID cards since the program began. In 2015, 99.7 percent of voters remembered to bring IDs to the polls.

In the past session, Hosemann tried to get a comprehensive election-reform bill through the Legislature, but its campaign-finance reform measures tripped it up. House Bill 809, allowing online address changes, and another bill amending election crimes made it through. Hosemann said important changes are still needed, however, like itemizing credit-card expenditures in campaign finance reports. "I want disclosure for credit cards instead of just saying, 'I paid a credit card bill. I want what's underneath that,'" he said.

Mississippi has some of the toughest and perhaps most skewed voter disenfranchisement laws on the books. Committing certain crimes in Mississippi ban a person from voting in the state, while other crimes do not. Hosemann said the Legislature ought to take another look at which crimes should disenfranchise people from voting and which ones should not, even though he says it is unlikely in 2017.

Crimes such as murder and statutory rape are considered disenfranchising under state law, but so are timber larceny and receiving stolen property.