'I Am Pissed Off': Mississippians Rage Against Abortion Bans 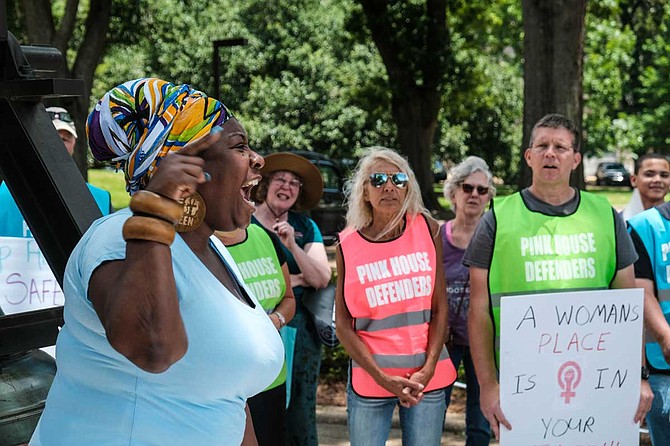 Mississippi in Action Executive Director Valencia Robinson told a crowd of abortion rights supporters outside the Mississippi Capitol building on May 21 that she is "pissed off" over efforts to restrict women's rights in states all across the country. Photo by Ashton Pittman.

JACKSON—Patricia Ice remembers life before the U.S. Supreme Court legalized abortion nationwide, because she had one as a teenager in a pre-Roe v. Wade America.

"I had a procedure, but I had to have it illegally," she told a crowd of abortion-rights activists gathered outside the Mississippi Capitol on Tuesday. "And that is my biggest fear—that we will go backwards, and that we will have to go back to what they called 'back-alley abortions.' ... Some women died in that time."

As Ice spoke, one woman in the crowd, Mindy Brown from Yazoo City, waved a metal wire clothes hanger in the air with a paper bearing the words "Never Again" attached to it. When abortion was illegal, some women used clothes hangers as a crude tool to induce abortions, often with deadly results.

Opponents of abortion bans nationwide held #StopTheBans rallies across the country Tuesday. Mississippi's rally took place just hours after a federal judge in Jackson heard arguments against a law Gov. Phil Bryant signed in March that bans abortions after six weeks of pregnancy. Opponents fear the law is part of a larger gambit to get a case before the U.S. Supreme Court to overturn the 1973 Roe v. Wade ruling.

Zakiya Summers, who is the director of communications and advocacy at the Mississippi branch of the American Civil Liberties Union and a candidate for District 68 in the state House of Representatives this year, told the crowd that the laws are "about taking away the right to have an abortion, plain and simple."

"Politicians have stopped pretending that these restrictions are about making abortion care safer or protecting patient's health," Summers said. "They've been really clear."

State lawmakers in Alabama, Tennessee, Georgia and Louisiana have all passed laws similar to Mississippi's six-week ban in recent months. Those laws, Summers said, are part of a "decades-long effort to eliminate access to abortion" and that "it's no coincidence that this is happening now."

During her remarks, Patricia Ice, who now lives in Mississippi but grew up in Michigan, talked about her former neighbor, Edgar Keemer Jr., an African American OB/GYN in Detroit who performed abortions illegally pre-Roe.

In 1956, Detroit homicide detectives raided Keemer's clinic and arrested him. Four of his former patients, whom authorities threatened with imprisonment unless they cooperated, testified against him in court. He spent 14 months in prison.

"He was giving people ... safe abortions," Ice said on Tuesday.

In court Tuesday morning, Judge Carlton Reeves did not rule from the bench on the case against Mississippi's "heartbeat law," which bans abortions after a fetal heartbeat becomes detectable—typically around six weeks' gestation. Hillary Schneller, a staff attorney at the Center for Reproductive Rights, told the demonstrators outside the Capitol that she is optimistic Reeves will block the law before it takes effect this summer.

"While we didn't get a ruling from the bench today, I think the court was deeply skeptical," said Schneller, whose organization is fighting the law in court on behalf of the Jackson Women's Health Organization, or JWHO, Mississippi's only abortion clinic.

"We hope to have a ruling soon and hopefully before this law goes into effect on July 1," she said.

"She is a goddess who walks among us," Williams told the crowd about Clarke.

Clarke pointed out her own long history of opposing abortion restrictions and urged the crowd to send more legislators to help her in that fight.

"Every time they tried to pass an abortion bill, Alyce Clarke said no," she said. "The problem is, I need you all to send me some helpers. I can't do it by myself. I need other people saying no as well. That's what we need to do."

'This is Criminalizing Women, Period'

The diverse crowd of about 200 abortion-rights activists included many who held signs with the words, "Stand With Black Women." The message appeared unifying, as not only black women, but black men, older white women, young white activists, and other men and women of color waved the signs.

More than just reproductive rights, she said, activists should fight for "reproductive justice."

Robinson led the crowd in a chant that alluded to Fannie Lou Hamer, an African American activist from Mississippi who famously fought for black representation at the 1964 Democratic National Convention, at a time when segregationist southern Dixiecrats dominated the party in the south.

"The freedom side!" the crowd called back.

'I Feel Lifted On Their Shoulders'

Among the demonstrators were 95-year-old Doreene McCoy and her daughter, Joedda Gore, who is 75. Both live in Clinton.

McCoy, who is a devout Christian, told the Jackson Free Press she thinks it's wrong to force women in poverty to have children. Mississippi has some of the worst poverty in the country. 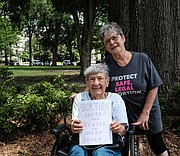 Doreene McCoy, 95, and her daughter, Joedda Gore, 75, joined a protest against state bans on abortion outside the Mississippi Capitol on May 21, 2019.

"They think they're saving that child, the ones who are against abortion, but actually what they're doing is bringing it into a life of hell," McCoy said.

Gore marveled at the number of young activists who showed up. When she was a young mother raising a family, she "lived in a bubble," she told the Jackson Free Press. Then, some time in the past year, she went to the Mississippi Civil Rights Museum.

The young activists demonstrating on Tuesday, she said, are "doing what those young people did in the '60s."

"Our young people are active. That's our hope again," Gore said. "So I feel lifted on their shoulders."

She said her mother, McCoy, began participating protests for the first time after Donald Trump's election.

"She is a Great Depression-era person," Gore said of her mother. "And she believes the government is there to help you—not control you, but give you a boost up. Because she saw what happened when the government could not do anything."

In 2011, Mississippi voters resoundingly defeated the Personhood initiative to deny abortion rights in the state, as well as contraception and in vitro fertilization. Gov. Phil Bryant was chairman of the Personhood campaign.