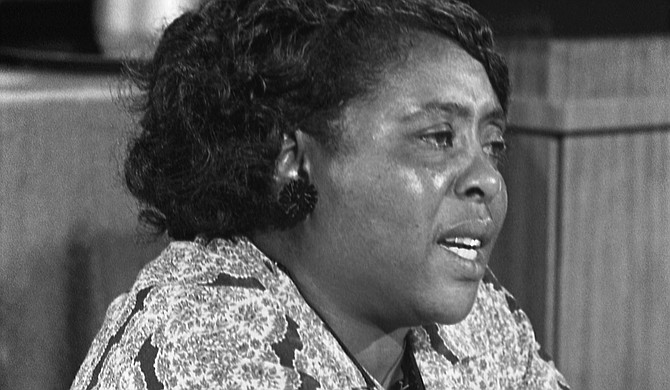 Fifty-one years ago today, Fannie Lou Hamer and a group of civil rights activists were returning to Mississippi after a literacy workshop in Charleston, S.C. Ignoring the bus driver's threats to involve police, the group sat at the front of the busy bus. At the bus station in Winona, Miss., they sat at the "white only" lunch counter in the terminal. Winona police ordered the group to move to the "colored" table, and when one of the activists began writing down the police chief's license number, he arrested everyone. They stayed in the county jail for four days, enduring brutal beatings from police officers and prison trustees.

Due to the violence, Hamer lost vision in one eye and suffered significant kidney damage. But that didn't stop her from fighting for African American freedom and rights.

After a month of recovery, she returned to Mississippi to keep registering black voters, even organizing the "Freedom Ballot Campaign" that August.

Hamer (originally Fanny Lou Townsend), was born to sharecroppers in Montgomery County, Miss., in 1917. The youngest of 20 children, she and her family moved to Sunflower County two years after her birth to work on a plantation. Hamer began picking cotton at age 6, dropping out of school at age 12 to work full-time to help out her family. In 1944, she married Perry Hamer and continued her sharecropping days on the Marlow plantation in Ruleville, Miss., eventually becoming the plantation's bookkeeper.

In 1962, a group of civil rights workers traveled to Ruleville to find people who could help generate interest in voter registration. After first meeting the group, she attended her first civil rights activists meeting, and that August went with 17 other African Americans to register to vote in Indianola, Miss. After registering, Hamer was fired from her job on the plantation, but she never looked back.

Losing her job allowed Hamer to do what she believed she was meant to do—fight for the rights of African Americans. She worked for the Student Nonviolent Coordinating Committee and in 1964, helped found the Mississippi Freedom Democratic Party. She and other black delegated demanded to be seated at the Democratic National Convention that year in Atlantic City, setting off a chain of events that led the national Democratic Party to embrace integration and part from southern party members who supported Jim Crow laws.

Hamer is famous for her oft-repeated quote: "I'm sick and tired of being sick and tired," which was part of a speech she delivered alongside Malcolm X at the Williams Institutional CME Church in Harlem on Dec. 20, 1964, less than three months before he was assassinated.

The next year, she even ran for Congress, though she wasn't successful.

Through her years as an activist, Hamer worked tirelessly for voting rights, prosperity and health in African American communities, and to desegregate schools.