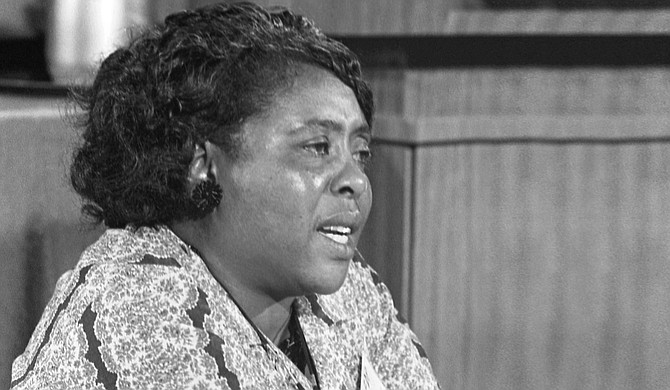 An anonymous donor is giving the University of Mississippi $100,000 to pay for a scholarship named after civil rights pioneer Fannie Lou Hamer, according to a news release from the university. U.S. News & World Report Magazine

OXFORD, Miss. (AP) — An anonymous donor is giving the University of Mississippi $100,000 to pay for a scholarship named after civil rights pioneer Fannie Lou Hamer, according to a news release from the university.

The scholarship is designed to help students who are pursuing African American studies in the university's College of Liberal Arts.

Hamer was born Oct. 6, 1917, and was raised on a cotton plantation in the Delta where she started working in the fields at the age of 6.

In 1962, she joined the Student Nonviolent Coordinating Committee and worked to register Black people to vote. At the time, Mississippi and other states had literacy tests and other unconstitutional roadblocks, to prevent African Americans from voting.

Hamer was a founder of the Mississippi Freedom Democratic Party, which challenged the seating of the regular party’s all-white delegation at the 1964 Democratic National Convention. During the convention, Hamer testified about resistance she and others faced. The testimony was so powerful that then-President Lyndon Johnson called an impromptu news conference to try to draw television attention away from her testimony.

Hamer was also known for her beautiful singing voice that she often deployed while visiting Black churches to talk to parishioners about voting.

“She worked so hard for the state of Mississippi and is a folk hero,” said the donor in the university's news release. “I hope she continues to be an inspiration to students and that this scholarship can provide the financial support to help them achieve their goals.”