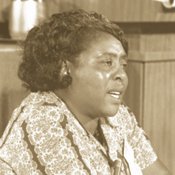 Last Sunday, my partner, Todd Stauffer, and I set off on another of our weekend road trips that take us wherever we end up. This time, we landed in Ruleville, northwest of Greenwood, at the grave of Fannie Lou Hamer and her husband, "Pap" Hamer.

We had been there about a decade ago, and it struck me then how uncelebrated Mrs. Hamer was. The couple's graves just seem to be out in the middle of a field in the middle of town. This time, they are surrounded by a bright red pavilion with a large memorial marker. There is a fountain, and a statue is rumored.

Mrs. Hamer, who died March 14, 1977, at age 57, has not achieved the same notoriety of Martin Luther King Jr., Rosa Parks or Medgar Evers. Yet. But her posthumous star is rising, and her homegrown Mississippi story is one than can inspire us all to become "sick and tired of being sick and tired," as she famously said, and to take action to change our state.

The introduction of a new book, "The Speeches of Fannie Lou Hamer: To Tell It Like It Is" (University Press of Mississippi, 2011), tells the rich story of Hamer's early life. Fannie Lou Townsend was born Oct. 6, 1917, the 20th child of sharecropper parents in Montgomery County. They moved to Ruleville when she was 2 and lived in a dilapidated shack on the E.W. Brandon plantation. There, like many blacks post-slavery, they share-cropped, barely clearing enough to turn a profit, thanks to white plantation owners' unfair calculation habits, designed to keep cheap labor "enslaved" to their land.

Young Fannie Lou only made it to sixth grade before she left school to work full time in the fields. She loved to read, though, and was a good speller. She liked to perform poetry, an early sign of the international public speaker she would later become.

She married a fellow sharecropper, Perry "Pap" Hamer, in 1944 and together worked on the Marlow plantation for 18 years. There, she displayed an early defiance. Due to her skills, she became the "timekeeper" who helped the owner record the workers' harvest. In that position, she would measure the yield fairly when the landowner was not around, ensuring that the families weren't cheated.

In August 1962, Mrs. Hamer's (and history's) course changed when civil-rights workers came to the Delta and started holding meetings to help black citizens fight for their voting rights.

Hamer attended her first meeting at Williams Chapel Missionary Baptist Church in Ruleville after learning about it during the Aug. 26 Sunday service. After she listened to James Bevel and James Forman fire up the crowd, she was hooked, saying that their message "seemed like the most remarkable thing that could happen in the state of Mississippi." She responded to the "altar call" at the end of the meeting, along with 17 others.

On Aug. 31, 1962, Mrs. Hamer went in a rented bus with other activists to register to vote at the Indianola courthouse, while leading them in singing Christian Hymns like "This Little Light of Mine" and "Go Tell It on the Mountain." She was turned away and then lost her job and was thrown off the plantation. Firing her backfired, however, on white supremacy: Being unemployed gave her the time to work for the Civil Rights Movement and help change Mississippi forever.

The book explains that because Hamer had a natural talent for using songs and her rhetorical skills to rouse audiences, she was quickly invited to travel outside the South to workshops and movement meetings. On her way home from a workshop in Charleston, S.C., on June 9, 1963, Hamer and other activists were arrested in Winona and taken to jail on trumped-up "disorderly conduct" and "resisting arrest" charges.

White jailers took two black men out of a nearby cell and gave them "loaded" blackjacks. Jailer John L. Basinger ordered the two black men--Sol Poe and Roosevelt Knox--to beat Hamer, saying, "I want you to make that bitch wish she was dead," according to later court testimony (a full transcription of her testimony is in the book). They forced her to stretch out face down, and the men beat her from the back of her head down to her legs, including on a spot where she had had polio when she was younger. She kept pulling her dress down to try to protect the spot, but Basinger himself kept it pulled up. "[W]hen they finished, my hands was navy blue, and I was hard. I was hard like metal," she said.

Before the jailers released her on June 12, they forced her at gunpoint to write a statement that she had been treated well in jail. She returned home and after recovering for several weeks, started organizing voter registration drives, including the "Freedom Ballot Campaign."

Mrs. Hamer went public immediately with what had happened to her, bringing national attention to the brutal efforts to keep blacks subjugated in Mississippi. She would soon join the "Freedom Democrats" and became vice chair of the group that went to the Democratic National Convention in 1964 to challenge Mississippi's all-white "Dixiecrat" delegation.

There, in nationally televised testimony to the Credentials Committee, she told the world in great detail about how this mother from Ruleville was beaten. That speech marked what would become nearly a decade of activism and rousing speeches across the country and world to bring attention to the plight of the powerless.

In a speech called "Nobody's Free Until Everybody's Free," she told the National Women's Political Caucus in Washington in 1971 that black and white women had to work together toward freedom for all.

She asked the women to join forces with other women to change America for the better--to "become one hell of a majority."

"And this is something that should have been done for a long time, because a white mother is no different from a black mother. The only thing is they haven't had as many problems.

"But we cry the same tears and under the skin it's the same kind of red blood."

The Fannie Lou Hamer National Institute on Citizenship and Democracy at Jackson State University is honoring the memory and inspiration of Mrs. Hamer at its awards luncheon today. For more information on the organization, see its Facebook page.

"The Speeches of Fannie Lou Hamer: To Tell It Like It Is" were edited by Maegan Parker Brooks and Davis W. Houck.

Looking forward to reading this book. Love her. She should be acknowledged in a big way. Let's make it happen.