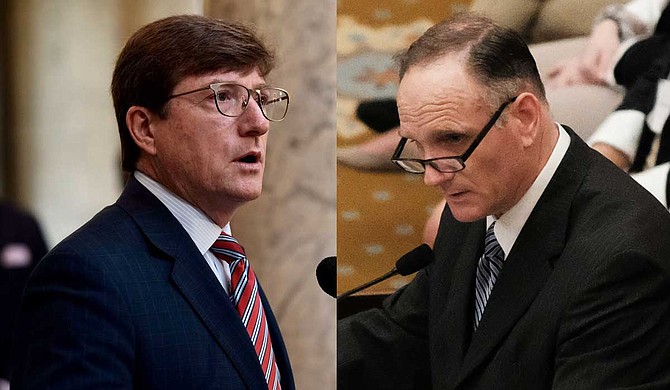 Democratic House Minority Leader David Baria criticized a GOP tort-reform bill and an amendment Rep. Mark Baker, R-Brandon, introduced. The bill and the amendment would make it more difficult for victims to sue property owners for negligence, he said. Photo by Ashton Pittman.

JACKSON — Businesses no longer would have to "take reasonable steps" to prevent violence on their premises after Republicans defeated a proposed amendment to a "tort-reform" bill working through the Mississippi Legislature, also called the Landowners Protection Act.

Democratic House Minority Leader David Baria introduced the amendment to Senate Bill 2901 Wednesday. The legislation seeks to shield businesses from liability in the event that a third party on the property causes an injury. Under the bill, courts could only hold property owners liable if plaintiffs could prove they "actively and affirmatively, with a degree of conscious decision-making, impelled the conduct" of the offending third party.

Even as Republicans in the House scuttled Baria's amendment, they passed one that Brandon Rep. Mark Baker, a Republican candidate for attorney general, introduced. His change defines a "premises-liability action" to mean "a civil action based upon the duty owed to someone injured on a landowner's premises as a result of conditions or activities of the land."

That change, Baria said on the House floor Wednesday, will make it even harder for victims to sue property owners for negligence.

"What the gentleman's amendment and what the bill does is create a higher standard for the premises' owner," Baria said. "You have to prove that they intended to hurt the person who gets harmed on their premises. That's all intent. You'll never be able to prove in a case like this that the premises owner intended to injure that person on their premises that got injured by a third party."

Before the vote, Rep. Robert Foster, a Republican candidate for governor who owns an agritourism business in DeSoto County, questioned Baria about his amendment.

"As a small business owner and property owner myself, does your amendment make it easier for lawyers to sue me as a property owner if somebody is attacked on my property or hurt?" Foster asked.

"It's impossible to sue you if you (Baker's) language gets adopted by this body, because you will never be able to prove that you intended for that random criminal to come onto your property and injure one of your patrons," Baria said.

"And gentlemen, I am also a small business owner. I just think that small business owners have a responsibility when they know or should know that somebody might come onto their property and commit a violent act, that they take reasonable steps. Do you find that unreasonable, gentleman?"

"Define reasonable," Foster shot back. "And I think that's the problem is that the amendment you're making is basically taking us back to where we were to begin with."

Earlier this month, opponents of this type of tort reform, including law enforcement and domestic-violence advocates, warned that it would make communities less safe. Businesses, they suggested, would no longer be as fearful of lawsuits and would spend less on security measures like surveillance, personnel and lighting. That, they say, would place a heavier burden on law enforcement.

The bill "would tell law enforcement officers that you appreciate their service," but that "you need them to do a little more, even though you know they are overworked and underpaid," Washington County Sheriff Milton Gaston Sr. wrote in a Feb. 4 letter addressed to House Speaker Philip Gunn and Lt. Gov. Tate Reeves. As lieutenant governor, Reeves also serves as president of the Mississippi Senate.

"You need them to micromanage everyone's property because it will save those who can afford to pay for their own insurance and protection even more money," he wrote.

Sixteenth Circuit Judicial District Attorney Scott Colom expressed similar concerns, writing in early February that such a law would be "antithetical" to his mission of "prosecuting violent crimes and offering suggestions to enhance the safety of my district." Without the help of assistance like private surveillance, he wrote, there would be less available evidence for investigators.

"We probably all are property owners, or most of us are," Baria told his colleagues on Thursday. "What's wrong with asking us to be reasonable corporate citizens when you know or should know that an act of violence might occur on your property? All you've got to do is take reasonable steps like lights or security cameras and in some cases hiring an armed guard. That's all we're asking."

The House killed Baria's amendment in a 71-43 vote, and passed Baker's on a voice vote. Though the House passed the bill 78-36 as amended, it held the bill on a motion to reconsider when the House resumes next week.

House Bill 337, a separate but similar bill also called the Landowner Protection Act, died on the calendar on Valentine's Day as Republicans opted to go with the Senate version, Senate Bill 2901.

When the Senate first passed the current bill on Feb. 7, Pascagoula Republican Sen. Brice Wiggins, a former prosecutor, deviated from his party. On Facebook that evening, he explained that he shared the same concerns as prosecutors like Gaston and Colom, and chose not to "go along with the crowd and outside interests."

The "outside interests" Wiggins alludes to include pro-business organizations like the National Federation of Independent Businesses, the Mississippi Association of Affordable Housing Providers and the Southwest Mississippi Board of Realtors, which traveled to the Mississippi Capitol on Feb. 8 to encourage representatives to pass the House version.

The bill's principal author, Sen. Josh Harkins, R-Brandon, is a real-estate broker himself and a member of the Chamber of Commerce, which also supports his tort-reform bill and has long pushed to limit lawsuits against businesses and corporations and the amount of payouts.

Insurance companies also have an interest in the legislation, wrote Virginia Kramer, a criminal defense attorney in Quitman.

"Our local politicians and law enforcement officials oppose this bill, too," she wrote in a Feb. 6 Facebook post. "These insurance companies aren't patrolling our counties, they aren't watching over our jails, and they aren't present in our courtrooms," she wrote. "We are. And we know what's going to happen if this bill becomes law."

Those concerns, the bill's' supporters say, amount to little more than scare tactics that another set of special interests—lawyers—are pushing because they stand to lose money due to a decrease in litigation. On Feb. 6, Republican Gov. Phil Bryant tweeted his support for the legislation, and quoted a Y'all Politics tweet that accused "the trial lobby" of putting "massive pressure on law enforcement" to oppose the bills.

The charge is reminiscent of the Mississippi Legislature's passage of tort-reform legislation to limit lawsuit payouts and other business-friendly limits 16 years ago, when the issue was a nationwide Republican and U.S. Chamber priority.

In the early 2000s, the primary response to critics of tort reform also centered on "greedy trial attorneys," although that was not the whole story, as the Jackson Free Press reported extensively at the time.

Then, national business lobbies also pushed for strong limits to lawsuits and payouts, and tort reform has long been a way to limit the amount of money trial lawyers in Mississippi and beyond could contribute to Democratic candidates. It was a leveling of the playing field, of sorts, with the GOP, which has deep coffers among wealthy corporations on the other side of lawsuits, and helps fund the campaigns of pro-business judges in Mississippi.

Tort reform was also a way to demonize candidates who did not support the lawsuit limits. "The pursuit of tort reform became the most emotional and influential wedge issue Mississippi politics had spawned in thirty years, and it aided Republicans by separating business campaign contributions from Democrats and by drying up trial lawyer campaign contributions to Democrats," wrote Mississippi political strategists Jere Nash and Andy Taggart in their book, "Mississippi Politics: The Struggle for Power 1976-2006." Nash is a Democrat, and Taggart is a Republican.

In the years since those reforms, though, even business organizations that promised that tort reform then would lead to a better "business climate" then later complained about lack of improvement. Tort reform, however, continued to be near the top of GOP business and political agendas.

The campaign for tort reform in the early 2000s often emphasized either directly or indirectly black plaintiffs getting large payouts—which tort-reform lobbyists referred to as "jackpot justice"—over other kinds of lawsuits and damages, thus playing on racist "freeloader" myths. Tort reform was a central issue for Mississippian Haley Barbour, the former chairman of the Republican National Committee, when he returned home from his lobbyist firm in Washington, D.C., for eight years to serve as governor.

"In a way that had not been accomplished since the civil rights movement, the tort reform initiative drew a line in the proverbial sand of Mississippi politics," Nash and Taggart continued. "Trial attorneys were on one side opposing tort reform, and businesses, joined by healthcare professionals, were on the other side advocating reform. A public official was forced to choose sides. There was no middle ground, no compromise. ... In post-tort reform Mississippi, the political dynamic has forever changed. For businesses and their political allies, a candidate who accepts contributions from trial lawyers becomes radioactive."

This year is also an election year in Mississippi.