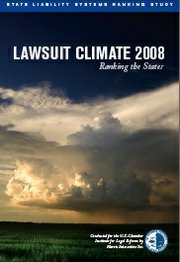 There's just no pleasing some people. The U.S. Chamber of Commerce's tort-reform lobbying arm, the "Institute for Legal Reform," released a report last Wednesday ranking Mississippi as the 48th worst "legal climate" in the country.

According to the report, Mississippi ranked 48th in its "overall treatment of tort and contract litigation," "treatment of class action and mass consolidation suits," "scientific and technical evidence," in "judges impartiality" and "punitive damages." The state ranked 49th for "judges competence," "having and enforcing meaningful venue requirements" and in the fairness of awarding "non-economic damages."

The state drew a big 50th in terms of "judges predictability."

"They've rated us before, and they used the same type of statistics, and we were rated right down about where we are now. The real hypocrisy of it all is that (Gov.) Haley Barbour now claims that we've had tort reform and that Mississippi is a much more friendly climate for business, and yet the Chamber still indulges in this propaganda."

The report arrives six years after the U.S. Chamber of Commerce began a campaign to revamp the state's legal system in 2002, spending $100,000 in ads calling for "common-sense" legal reforms and warning companies not to do business in Mississippi, citing "significant risks its members and all companies face," because of a supposedly biased legal system targeting businesses "with frivolous lawsuits" and "outrageous verdicts."

The Institute for Legal Reform has since given formidable financial support to the campaigns of anti-plaintiff judges in the state's Supreme Court.

Corporate donations to justices' campaigns may also be helping ensure a healthy bias against plaintiffs. Mississippi secretary of state records reveal that Justice William Waller Jr. took in about $300,000 in 2004 from insurance companies, physicians and corporations friendly with insurance companies. Chief Justice Jim Smith also took in around $300,000 from anti-regulation sources, as did Justices George Carlson and Mike Randolph.

The Chamber wasn't satisfied, though. In 2004, Barbour and Ross worked together to pass the Tort Reform Act of 2004, eliminating some liability to retailers for defective products, locking in the state's $500,000 cap on pain-and-suffering damages in medical malpractice cases and placing a $1 million cap on such damages in all other cases.

The former senator, reached at his Jackson law office, said the report does not accurately note the state's improvement.

"It takes a while for perception to catch up with reality," Ross said. "In damages, we ranked 49th, but we now have caps on damages. That's one issue where the message may not have gotten out. Same thing with the report's rating on our treatment of class-action suits and mass consolidation suits. The Mississippi Supreme Court has taken a very proactive stance on joinder issues and as a result Mississippi is no longer the center of asbestos and silica litigation like it was at one point."

The Mississippi Association for Justice dismissed the report as an attempt to coddle an "extreme corporate agenda."

"This latest propaganda is further proof that the U.S. Chamber serves at the behest of elite corporate insiders. The U.S. Chamber's goal is to make sure people can't get justice in the courtroom, especially against the corporations that finance this front group," Diaz said.

The association said the ILR's 30-person board is composed of drug, chemical, and insurance representatives with a combined 2007 corporate revenue of $1.4 trillion.

MAJ said that the rankings gathered in the report derive from "corporate defense lawyers," and that "no local attorneys, judges or media were surveyed."

The report, itself, admits the source of the opinions, without acknowledging bias.

"One important point to note is that these rankings and results are based on the perceptions of these senior corporate attorneys," states the report in its summary conclusion.

Diaz vowed that his organization would "fight to hold powerful corporations or front groups like the U.S. Chamber accountable when they seek to evade responsibility."