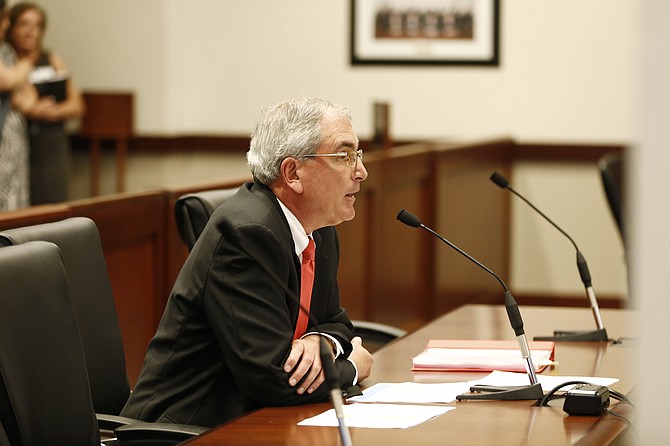 David Dzielak told the House Medicaid Committee that food security, housing and safety are all social determinants that could help improve conditions of Mississippians last week. Soon after, he submitted his resignation after serving as the executive director of the Division of Medicaid under Gov. Phil Bryant. Photo by Imani Khayyam.

JACKSON — Medicaid is arguably one of the more disliked state agencies in the Republican supermajority Legislature—constantly berated for eating up almost a sixth of the state's $6-billion budget in the last year.

In 2018, lawmakers have to reauthorize the Division of Medicaid in state law, opening up the technical amendments bill for debate about what changes the program needs, if any. Most lawmakers expressed frustration, during hearings last week, at not being able to curb costs since transitioning to managed care in 2011.

Rep. Chris Brown, R-Nettleton, who chairs the House Medicaid Committee, held a "How to Improve Care while Cutting Costs" meeting on Dec. 14.

Representatives from medical providers, managed-care companies and the Division of Medicaid presented suggestions on how to curb costs and make the program more efficient.

Medical care and costs nationally continue to climb, but in Mississippi, a part of rising costs of Medicaid include the state's high rate of emergency-room visits and pre-term births. Medicaid imposes no limits to how many times a person can visit the emergency room.

Dr. William Grantham, president of the Mississippi Medical Association, told lawmakers the best way to limit those visits is through providing better care management. For example, if a nurse checks in on a patient with asthma regularly to ensure they are using their inhaler, the likelihood of that person needing to go to the ER for an asthma attack is likely a lot lower.

Mississippi also has the highest rate nationally of pre-term births, which are high-cost and high-risk to not only the mother and baby's health but also to the Division of Medicaid. Aaron Sisk, the CEO of Magnolia Health Plan in Mississippi told lawmakers that pre-term deliveries can have long-term health consequences.

"Our pre-term delivery rate is being driven by our Medicaid beneficiaries by and large, so if we can tackle that—and it's a steep hill to climb, I assure you—we're going to see some real, real success both immediately, in health outcomes and financially," he told the House Medicaid Committee last week.

The state has made some progress on its pre-term delivery birth rate, a recent study from the United Health Foundation shows, but Mississippi still ranks last place nationally, with the highest rate of babies born pre-term. Hinds County has the highest pre-term birth rate in the state, a March of Dimes report shows. Women with chronic medical conditions, as well as black women, are at higher risk for pre-term birth in the state. Socioeconomics also impact whether or not a baby is born early.

Sisk said one of the challenges is identifying women that are pregnant receiving their medical benefits. He said often times a woman receiving Medicaid benefits will not alert her doctor for a few months after she is pregnant, which means the managed-care company cannot offer her the support she needs and qualifies for until that point. From a financial standpoint, it costs the managed-care companies—and in turn the Division of Medicaid—less money when women alert their medical provider and insurer so they can receive the pre-natal support they need.

Changes in the Works

Ryan Harper, an independent pharmacist from Rankin County, emphasized that in order for Mississippians to get healthier and for costs to go down, the health-care industry cannot operate in silos.

The program is full of rules and specifications, depending on the company. One rule caps the number of prescriptions a Medicaid recipient can receive. A Medicaid recipient using United Healthcare can receive five prescriptions per month, six prescriptions per month on Magnolia. Harper told lawmakers this number is low compared to other states, and suggested increasing the number of prescriptions recipients are allowed to take, pointing out that while this might be an additional upfront cost, it is likely to drive down ER visits and other costly follow-up care that is not preventative.

Managed-care companies want the ability to negotiate rates for specific and different services in the state. Currently, the fee schedule is published on a monthly basis, and Magnolia and United Healthcare must pay medical providers according to that schedule.

"We can pay more than that fee schedule, but we don't have the ability to partner with providers to pay more or less for certain services, talking about specialty care versus primary care, being able to negotiate rates for different types of services and also the ability to pay lower-quality providers less than we pay higher quality providers," Sharon Estess, CFO of United Healthcare Plan in Mississippi, told the committee.

On the flip side, some lawmakers told stories about medical providers in their communities not receiving any reimbursement from managed-care companies or getting credentials from the companies outside of the 60-day window prescribed in state law.

"I don't want to be all fluffy because there's nothing at all fluffy going on with managed care. We've got to do better, and obviously y'all have got another contract even though your costs have gone up," Rep. Becky Currie, R-Brookhaven, told Sisk last week. Currie asked representatives from both managed-care companies if the Division of Medicaid had sanctioned them for breaking those laws. Both Sisk and Estess did not think so.

"We have got to put something in this ... bill that sanctions them when they don't obey the law for credentialing and (when) they don't pay the providers for their work," she said.

To add fuel to the Medicaid debate fire, Executive Director David Dzielak told lawmakers that food security, housing and safety all impact Mississippians that the Medicaid division serves, although those social determinants are outside the realm of the division.

"Those things certainly aren't in the realm of division of Medicaid but really need to be looked at in the aggregate of really how to improve the conditions of (people in this state)," he said.

Dzielak abruptly resigned last week after the Thursday Medicaid hearings, however, meaning the governor will need to pick a replacement for the executive-level agency.