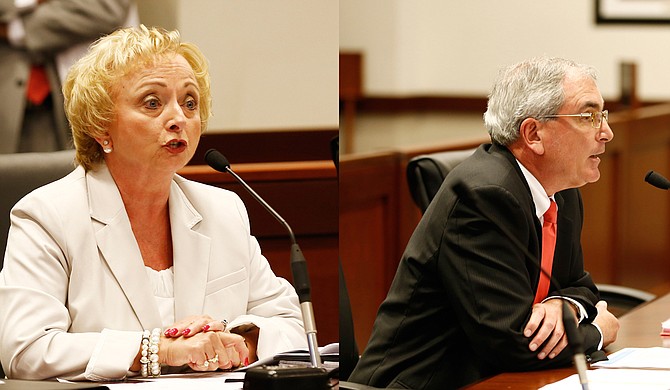 Superintendent Carey Wright (left) asked the Joint Legislative Budget Committee for $2.8 billion for the next fiscal year. Dr. David Dzielak (right) said the Mississippi Division of Medicaid has one of the lowest administrative costs in the country. Photo by Imani Khayyam.

Last week, though, both Republican Lt. Gov. Tate Reeves and Rep. John Moore, R-Brandon, questioned state education Superintendent Carey Wright about the effectiveness and cost of education programs that operate outside of MAEP funding such as the literacy assessments, pre-K programs and expanded college-preparation courses. Moore added that these parts of the department's budget are susceptible to cuts should voters force the Legislature to fund MAEP in the amount state law requires.

"These monies are all eligible for a seven-and-a-half percent cut rather than an increase according to the chairman of Appropriations in order to move that money directly over to the (MAEP) formula, is that correct?" Moore asked Wright.

Wright agreed and said such education cuts would be significant, but it depends on how the funds were cut and if pass-through funds (usually federal funding that goes straight to schools) were cut, too.

The Republican leadership, which is against fully funding of MAEP, insists that if Initiative 42 passes, lawmakers will be forced to fully fund MAEP immediately, although its proponents are not asking for immediate funding. In addition, Republicans warn that it would require a 7.8 percent budget cut to most state departments. Frierson's budget-cut proposals formed the basis for many of the inquiries of the Joint Legislative Budget Committee members at the Woolfolk Building on Sept. 21 and Sept. 22.

In the request for fiscal-year 2017, the Department of Education is asking for $250 million more than in fiscal-year 2016. The total budget request amounted to over $2.8 billion. Eighty-eight percent of the $2.8 billion would go to fund MAEP, leaving only $334 million for other education costs, according to the department's budget request submitted to the committee. A 7.8 percent cut to those funds would result in a loss of $26 million for the department.

Losing these funds would dampen progress the department has seen—especially in their expansion of pre-K programs and third-grade literacy standards, Wright said. Even though 92 percent of third graders in the public-education system passed the reading test, Wright told the committee this does not mean all students who went on to fourth grade are actually reading on grade-level because the assessment allows students to pass with the lowest achievement level possible. Three thousand third graders were forced to repeat third grade this year. The third-grade reading gate is based on the Mississippi Literacy-Based Promotion Act and needs an additional $18 million in funding according to the department's budget request.

"There's a number of children in fourth grade that will continue to need more help," Wright told the committee.

The Department of Education wants to expand early-childhood education programs, because 58.9 percent of the kindergartners who participated in one of the 11 department pre-K programs scored at or above the expected score, as stated in an MDE news release in August. MDE wants to expand the pre-K programs, however, because a third of students still begin kindergarten without the necessary skills, Wright said.

Republican lawmakers also targeted the Mississippi Division of Medicaid at the budget hearings, playing it against education funding, primarily because it is exempt from the proposed budget cuts and its budget has grown substantially since 2008.

This year the division is asking for just over $1 billion in funding. The division asked for $71 million for the rest of fiscal-year 2016 to account for the funding deficit—the Legislature has underfunded the division for the past three years. The Medicaid division provides health coverage for low-income people in the state, using a combination of state and federal dollars.

Dzielak said his budget has increased because medical service costs are growing, with an inflation rate of 6.2 percent, but the division's costs are only growing at around 3 percent. The division plans to combat rising costs by changing their back-end services. The division is transitioning the way it reimburses those who provide inpatient hospital services. Erin Barham, deputy administrator for communications at the division, explained that the it will pay its managed-care partners—Magnolia Health and United Healthcare Community Plan—a set per member/per month fee for the services, instead of paying hospitals per-service fees.

The change will not affect recipients of Medicaid services, but it will cost $10 million in one-time funding to take effect. The in-patient to managed-care transition will start Dec. 1, but Dzielak does not know the exact cost savings yet because the program has yet to begin. Since the per member/per month fees are set, Barham said cost predictability will enable cost savings for the division going forward. While the committee focused on how much the budget increased over the past four years, Dzielak pointed out that more people have joined since the agency adopted the latest Affordable Care Act standards for modified gross income for people to qualify for Medicaid.

"There are more people on Medicaid now than there were many years ago," he said.

While enrollment (total state Medicaid recipients) is higher than in previous years, there has been a downward trend in 2015 since March. Some committee members were concerned with the decreasing enrollment that peaked in March when a total of 796,103 Mississippians were enrolled.

As of August, 781,669 Mississippians are enrolled in Medicaid, 14,434 fewer, even though costs are still increasing.

Dzielak said his division is still trying to determine why enrollment numbers are lower now than in March. He told the committee that one reason could be that new recipients who came onto Medicaid last year for the first time are rolling off the plan and not re-enrolling. The federal government no longer requires the division to do face-to-face renewals, based on new Affordable Care Act standards, which means Division of Medicaid workers must contact recipients with whatever information they received during intake—but it may no longer be current.

Medicaid recipients, Barham said, have a responsibility to notify the offices if their contact information changes. Medicaid recipients are responsible for their renewal within a time period after notification, and if they don't renew, they roll off the plan.

MS Schools for the Blind and Deaf .5%