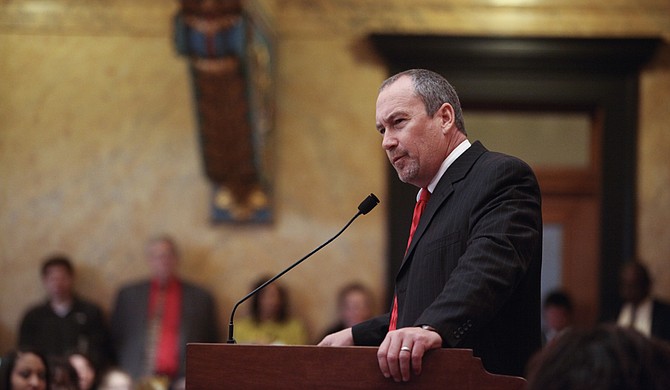 Representatives for state workers are decrying proposed budget cuts to state agencies that House Appropriations Committee Chairman Rep. Herb Frierson, R-Poplarville, asked for last week. He said the cuts would be necessary to fully fund the Mississippi Adequate Education Program if Initiative 42 passes in November. In a meeting with state agency directors, Frierson told the group to prepare to slash their budgets by 7.8 percent across the board. Those budgets are due Wednesday, July 15.

Proponents of the initiative, however, are charging Frierson with playing politics. They point out that, if 42 passes, the education funding could happen gradually depending on general-fund revenue, meaning that the state would not need to institute the immediate cuts he's threatening.

Initiative 42 is a citizen-driven ballot initiative that will require the state to establish, maintain, and support an adequate and efficient system of free public schools—which is already state law. Frierson told the Associated Press that if Initiative 42 passes, it is likely to result in immediate full funding of MAEP in next year's budget, even as its proponents are not calling for that to happen.

Frierson's meeting, Scott said, was just another way to get people to not support Initiative 42, but now people will have to take his response into consideration when they vote in November.

"I think it's a lot to put on the minds of our state employees and people who need the services—and that's all of us," Scott said.

Budget cuts will come hard to agencies that are already underfunded, and Scott said Frierson has set up an excellent opportunity to come back later and suggest that for-profit companies come in and take over the work that state agencies are failing to do due to the cuts.

"The reason they are failing is because they are not given the tools and the resources to do their jobs adequately by the citizens of Mississippi," Scott said.

Glenn Boyce, commissioner of higher education, said that universities are looking at all aspects of operations to address the cuts. Boyce also said in a statement that universities "are considering how a permanent reduction in general fund dollars available to universities and other state agencies will impact tuition, student services and personnel in future years."

At Jackson State University, the budget reduction translates to a $3.4 million funding shortfall, according to an email that went out to faculty and staff.

The Department of Health is working on its budget-cut plan but would not release details until the report is final.

The Division of Medicaid and the Department of Education are exempt from the proposed budget cuts.

About Those 'Scare Tactics'

State employees aren't the only ones upset with the proposed cuts.

Patsy Brumfield, communications director at Better Schools Better Jobs, which helped get the initiative on the ballot for November, said Initiative 42 aims to phase in adequate education funding gradually, not immediately.

Specifically, the plan was that if Mississippi's general fund increases by an average of 3 percent each year, then 25 percent of those revenues would go toward public schools. Depending on the state's rate of economic growth, public education could be fully funded within seven years.

"We are offering them a plan that we think is conservative, prudent and fiscally responsible, and that will not cause problems for agency budgets," she told the Jackson Free Press.

Backers of the initiative recommended, through paperwork filed with Mississippi Secretary of State Delbert Hosemann, to fund education "not by new taxes but by using a portion of future increases in the general fund."

Brumfield said the funding plan would not interfere with state budgets or increase taxes. "It's a natural way to grow, and of course, if something happens and there is no growth, then there's no money that goes into MAEP," Brumfield said.

The initiative does not demand immediate funding of MAEP, a formula that the Legislature created in 1997 and has fully funded only twice. Before the end of the legislative session this year, higher revenue forecasts prompted lawmakers to increase MAEP funding from early budget drafts. Yet, the enacted budget still shorted MAEP around $200 million, which equals about 3.2 percent of the state's $6.2-billion state budget.

"Assuming the Initiative passed, if it's any question about whether the Legislature is following the constitution or not, then that would be a question for a court," Blount said.

The proposed timing of fully funding MAEP is in the original filing of the ballot initiative but is not a part of the official language that would go in the constitution. In the original filing with the Mississippi secretary of state, proponents of the initiative suggested that $265 million could be amassed over seven years' worth of future increases in the general fund.

"To protect each child's fundamental right to educational opportunity, the State shall provide for the establishment, maintenance and support of an adequate and efficient system of free public schools. The chancery courts of this State shall have the power to enforce this section with appropriate injunctive relief."

Because of their opposition to the initiative, top Republican leaders crafted a proposed alternative amendment to Initiative 42 known as 42A. A Hinds County judge rewrote the proposed alternative, and its fate is now up to the Mississippi Supreme Court, which is expected to rule on the matter soon.

Frierson told the Associated Press that he opposes both initiatives, and he believes either would require budget cuts in other state programs.

Scott said that Frierson could look at other options like the recent $1 billion settlement from BP that will run over 17 years or the rainy day fund to fully fund MAEP.

"When you talk about being forced to fund public education, a hungry child, an abused child, a sick child is not going to learn," Scott said.

"So, therefore, we don't need to pit the children against everybody else."