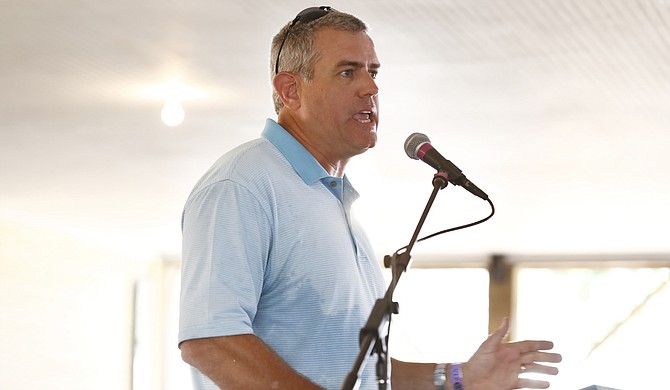 Speaker of the House Philip Gunn, a Republican from Clinton, is adamantly opposed to Initiative 42 to fund public education, calling it “bad public policy.” Photo by Imani Khayyam.

Higher education, mental health and human services would suffer large reductions in staff and funding with the 7.8 percent cut Mississippi state agencies are proposing should voters choose to force the State to follow the law and fully fund public education in Mississippi.

Agency heads took House Appropriations Committee Chairman Rep. Herb Frierson, R-Poplarville, seriously when he asked them to submit budget-cut proposals in preparation for the passage of an initiative to fully fund the Mississippi Adequate Education Program this November.

Many Republicans, thus far, have insisted that if Initiative 42 passes, they will adhere to the constitutional language and fully fund the Mississippi Adequate Education Program immediately. This has angered advocates of the initiative who emphasize they are not asking for immediate funding, instead proposing it be phased in contingent on general-fund increases over several years.

House Speaker Philip Gunn, R-Clinton, said initiative 42 is detrimental and bad public policy because it turns legislative power over to the judicial branch to enforce state law. Gunn also told the Jackson Free Press last week that the initiative takes power away from the people who should get to decide how to spend their own tax dollars.

Advocates of Initiative 42 don't see it that way. The Mississippi Adequate Education Program, the formula the Legislature created in 1997, has been fully funded only twice despite it being required under state law. Before the end of the legislative session this year, higher revenue forecasts prompted lawmakers to increase MAEP funding from earlier budget drafts. Yet, the enacted budget still shorted MAEP around $200 million, which equals about 3.2 percent of the state's $6.2-billion state budget.

Echoing Frierson, Gunn said that if the initiative passes, they will have to find the money somewhere else.

Patsy Brumfield, communications director of Better Schools Better Jobs, which is pushing the initiative, said cutting state agency budgets or raising taxes is an "unacceptable way to fund K-12." Lawmakers have plenty of other choices for funding education, she added, insinuating that the Republican-led agencies are playing games to scare voters away from passing 42.

"All of this talk about budget cuts is completely false and not going to happen," Brumfield said. "They will not choose the worst thing to do if they have a myriad of better choices."

"To protect each child's fundamental right to educational opportunity, the State shall provide for the establishment, maintenance and support of an adequate and efficient system of free public schools. The chancery courts of this State shall have the power to enforce this section with appropriate injunctive relief." 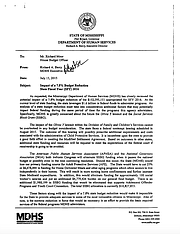 Brumfield said the beauty of the language of Initiative 42 is that it allows the Legislature to have appropriate options it needs to fully fund education. "(The initiative) doesn't tie the Legislature's hands into any one plan," she said. "It allows them to look at what is feasible or responsible."

When asked about the proposed phased-in funding, Gunn said he is only considering the words going into the Constitution because that's all that a judge will have to go on.

"My response is: read it. Read the language of the initiative, and nowhere in there does it mention a phase-in or 25 percent growth," he said.

All state agencies except the Division of Medicaid and the Department of Education are exempt from the proposed budget cuts. 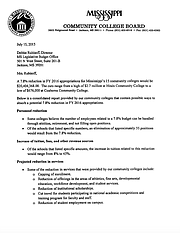 The Mississippi Department of Human Services will suffer a $152 million loss in funding if its budget is cut by 7.8 percent. A memo filed from Richard Berry, executive director of MDHS, said that the Olivia Y foster-care lawsuit would need to be taken into serious consideration should budget cuts become necessary.

The state will face a federal contempt hearing in August over the foster-care lawsuit brought against the state, and Berry's memo warns that the outcome of the hearing will result in additional requirements for the agency. Berry wrote, "It is incumbent upon the state to provide a good-faith effort in meeting the Modified Settlement Agreement."

If the state does not agree to the settlement, the plaintiff's counsel will ask the judge to put Mississippi's foster-care system into receivership, shifting the power to implement the program over to a judge instead of the government. The lawsuit has dragged over seven years with inadequate effort on the part of the state to repair it. Gov. Phil Bryant said in a statement that he intends to improve the system possibly by creating a Children's Cabinet. After an outside group reviews the system, it will make recommendations on how to drastically improve the system. 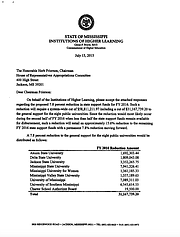 Some colleges said they could handle cuts with retirement and freezing hiring, but others could not. The community college board proposed eliminating an estimated 55 positions could be eliminated from the 15 colleges as well as hiked tuition fees, possible elimination of programs from sports teams to limiting available scholarships in order to pay to fund adequate education immediately even those its advocates do not call for that.

State universities could lose more than $30 million if proposed budget cuts took effect. A statement from the Mississippi Institutions of Higher Learning revealed that Mississippi State has the most to lose from this cut—almost $8 million in funds. 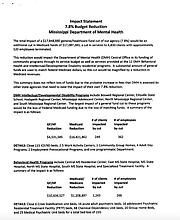 The proposed cuts could also target subsidiary programs including Student Financial Aid, University of Mississippi Medical Center and Agricultural Units from Alcorn State and Mississippi State, with a total of about $27.6 million possibly being cut from these programs. The cuts at UMMC could result in cutting 200 nurses and losing 235 medical patient spots. The lost of 235 medical surgical hospital beds lost would equal around 10,500 patients per year.

While Frierson said he would not cut Medicaid, cuts to some agencies that rely on federal dollars through Medicaid would suffer budget cuts.

Under the agency's plan, Mississippi Department of Mental Health, for example, would have to cut $17.8 million from its entire department, resulting in a loss of $17.1 million of Medicaid funding. Intellectual and developmental disability programs provided at several centers around the state survive on more Medicaid funding than general funding, and would be hurt the most: 362 employees could be cut and $16.4 million lost in Medicaid funds. The department estimated that 4,750 clients would no longer receive needed services, and 643 employees would lose jobs if the cuts were enforced on their agency.