The Battle for Children’s Mental Health in Mississippi 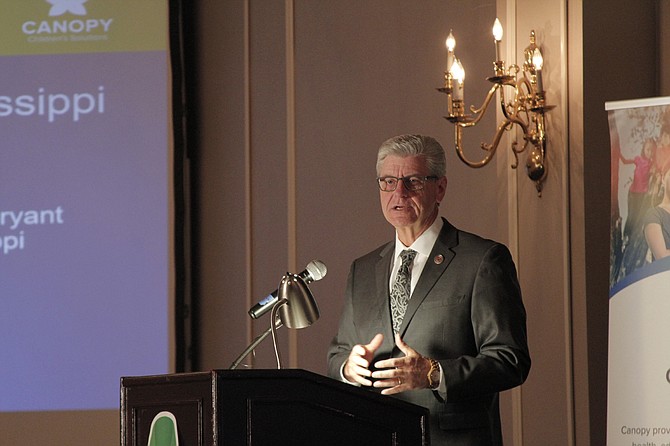 Gov. Phil Bryant, who is a named defendant in the amended complaint for children’s mental-health care, called on the Mississippi Department of Mental Health to expand community-based services for kids at the Children’s Mental Health Summit in Jackson last week. Photo by Arielle Dreher.

JACKSON — Lisa Fuller, a Mississippi mother of two in Madison, stood up at the Children's Mental Health Summit at the Jackson Hilton on May 12 to explain her laborious journey of finding care and support for her two daughters: one who has high-functioning autism and the other who has anxiety and depression disorders.

Fuller had to send both of her daughters out of state to receive inpatient treatment at therapeutic boarding schools. She acknowledged that her family was fortunate to be able to afford the treatment her daughters needed.

"Quality treatment programs should be available for everyone—it shouldn't be for just people like me who have a really good job and can afford it," Fuller told mostly mental-health and child-care professionals at the summit last week.

"I don't make a whole lot of money, but I am willing to sacrifice, and that's what my family and I have done."

Fuller sent her oldest daughter to a school in Utah, after several attempts at other programs and schools around the country. She is now in public school and doing well after spending time away. Her youngest, who suffers from anxiety and depression, ran away from the school Fuller sent her to in Mississippi. After she completed a program in Georgia, the younger daughter went to a therapeutic boarding school in North Carolina, and she has progressed tremendously—from running away again to becoming student of the week.

The Madison mother reiterated that all children deserve quality care—even the families that cannot afford to pay for it. Fuller told the story of one girl who was at school with her youngest in Georgia whose mother had to take her out near Christmas because she could not afford the tuition and high costs to keep her there.

"Her daughter committed suicide New Year's Eve, at 14 years old. ... The point I'm making is if that child's mother could have afforded the program ..., she would probably still be with us today," Fuller said. "We've got a lot of work to do nationally, not just in our state to provide funding to allow families to have help."

Gov. Phil Bryant spoke before Fuller came to the podium and had to leave the summit immediately, missing her story.

The governor's primary message was that criticism of the State's cuts to mental-health budgets is about partisan politics.

"We must stop politicizing the care of children," Bryant told the summit.

Budget concerns are not at the forefront of Bryant's concerns for mental-health care in the state, and he pushed back on news reports that Mississippi is in a financial crisis, citing the state's $280-million rainy-day fund. He said at the summit that if the state was in financial crisis, it would look like California, Louisiana or Alabama.

"We're going to do just fine, and we're going to continue to take care of these children," the governor said.

Bryant said he was troubled with some state agencies, namely the Mississippi Department of Mental Health. 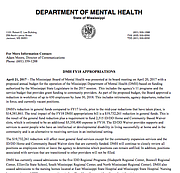 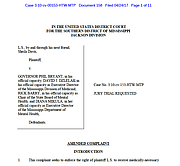 "I have some conflict with the Department of Mental Health—I'll admit that. I'm not mad at them; we just don't agree on some things," he said about DMH with agency representatives sitting in the room.

"See," Bryant continued, "I agree that we need to work harder to make sure our children have home and community-based services that they can continue to go to school and play with their friends ... and still receive treatment."

"The idea that we're going to continue to take children and place them in institutions somewhere for extended periods of time is something that we've got to get past," the governor added.

This is one of the first times Bryant has publicly acknowledged community-based services as a best practice. In fact, last August when DOJ sued the state for its over-reliance on institutions, he told the Associated Press the lawsuit was "another attempt by the federal government to dictate policy to the states through the courts."

Bryant told the Mental Health Summit crowd on May 12 that he hopes the Department of Mental Health is not reducing its financial support to other groups, such as Families as Allies, because the governor has met with them. Bryant also renewed the push for a children's cabinet, which is a proposal for all state agencies that deal with children's emotional, physical, and mental health to be under one agency and report to the governor.

"I may not be able to formally establish a governor's children cabinet—I haven't given up on that, but I can help through coordination, and we're going to do that," Bryant said last week.

Legislation to establish a children's cabinet as well as an attempt to move the Department of Mental Health under the governor's purview died in the 2017 legislative session. Currently, the department is run by an executive director, appointed by the Board of Mental Health, which is composed of governor appointees. 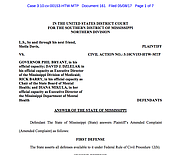 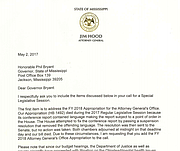 In the meantime, the court battle for Mississippi children seeking access to mental health care in their communities has changed drastically.

A lawsuit filed in 2010 seeking community-based services for all minors in the state is now focused on relief for a single plaintiff, L.S., who has a moderate intellectual developmental disability and a co-occurring mental illness.

Lawyers from the Southern Poverty Law Center filed the amended complaint on behalf of the 19-year-old back in April 2017, but the Jackson Free Press has confirmed that the SPLC is officially off the case. L.S. is represented by a new lawyer but still seeks treatment and services in his community—not in institutions.

"L.S. has been needlessly institutionalized for the majority of his adolescence .... (He) has cycled through hospitals, acute care facilities, residential treatment facilities, intermediate care facilities for individuals with developmental disabilities, and group homes without obtaining any long-term relief," the April amended complaint states.

The State denies these claims, however, in its response filed earlier this month.

L.S. seeks access to the proper services for his developmental disability—which the Americans with Disabilities Act requires states to provide. Attorney General Jim Hood said he hopes to reach some agreement in the new case, formerly referred to as Troupe v. Barbour. The State still faces a lawsuit the U.S. Department of Justice brought against Mississippi for over-relying on institutionalization to care for adults who need mental-health care.

"There's one plaintiff in the Troupe complaint now—hopefully we can accommodate that person and reach some agreement so that our energies are spent in the DOJ case, which will address some of the same issues, which is why we originally tried to consolidate it, but yeah, hopefully we'll be able to work that out," the attorney general said earlier in May.

The State's challenges with mental health could get more complicated come July as the Mississippi Department of Mental Health deals with a cut of almost $20 million that officials estimate means a loss of 650 employees by the end of June.

In a May 2 letter to Gov. Phil Bryant about the special session, which will likely include a bill for Hood's office budget, the attorney general said his office needs additional funds to cover the costs of litigating the DOJ case—to the tune of $1.72 million to hire a document handling firm, policy experts and outside counsel.