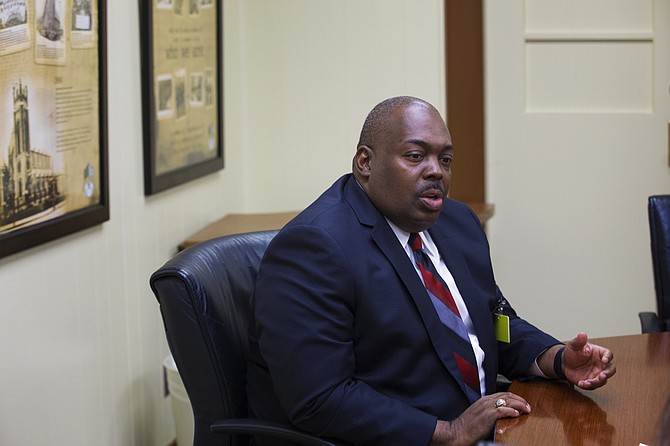 Dr. Freddrick Murray, superintendent of Jackson Public Schools, said it was proactive and necessary to consolidate some schools in light of a decreasing student population and decreased funding—helped along by charter schools. Photo by Imani Khayyam.

In Dr. Freddrick Murray's view, Jackson Public Schools has to be proactive to get in front of the myriad problems the district faces, from decreasing enrollment and funding at most levels to maintaining the district's 60 schools and buildings with enough teachers, staff and maintenance. The problem, he said, is exacerbated by charter schools drawing students and money out of JPS schools.

One way to save money is consolidation, Murray says, and as a part of the district's corrective action plan, JPS told the Mississippi Department of Education it would look at combining a few schools in the district. Administrators started with a list of four schools with student enrollments with 150 or fewer students. Rowan Middle School fit that description, and last year, administrators decided to close it—and by this fall all remaining students there will attend Brinkley Middle School instead. This year, administrators announced it also would close Poindexter Elementary.

Three elementary schools in the district have fewer than 150 students: George, Barr and Poindexter Elementary. George Elementary and Barr Elementary both have significant renovation plans in place or near completed, thus affecting the administration's decision to move Poindexter's students to Barr Elementary.

Murray told the Jackson Free Press that JPS just invested about $4 million in Barr's ceiling, floors and lighting over the last three years. The newly renovated school has room for the 109 students at Poindexter. It is also less than a mile away.

Consolidating schools in JPS is a huge cost-saver, Murray said, more due to teacher salaries and fringe benefits than to building upkeep. No one will lose his or her job as a result of the consolidation, Murray said, adding that the teachers and support staff will either follow students to new schools or take vacant spots elsewhere in the district.

Classroom sizes will not grow at Barr Elementary as a result of taking on more students because their teachers will follow the students, Murray said. Barr and Poindexter each had only one teacher per grade, so now Barr will have two classrooms and two teachers per grade.

Poindexter Elementary cost $1.8 million to operate in the most recent school year. More than $1.09 million of that cost went toward teacher benefits and salaries, paid through state funds, and those monies are what the district will save by closing Poindexter. Murray plans to keep the building open and use it as a professional training development site for teachers. The building only costs around $75,000 to maintain annually.

At a Feb. 21 school-board meeting, one parent made a public comment asking how involved parents were in the merging of Barr and Poindexter Elementary schools. Murray says that while no one is thrilled about closing schools, the district has not received too much resistance.

"I think that we've asked people to look at it rationally, just like in your home when you are short on money, and one prime example we think about (in JPS is) buses," Murray told the Jackson Free Press in an interview. "We talk about our buses not being on time, and one of the reasons is we need more buses—a bus is $80,000, though, and we don't have the money to get 25 to 50 buses."

Closing Poindexter means JPS has more than $1 million to buy new buses and work on other inner-district issues such as training and retention of teachers and other fixes addressed in the CAP plan to keep the State of Mississippi from taking over the district.

In December 2016, the Mississippi Department of Education approved JPS' CAP plan, but the district will be on probation until all of those plans are fulfilled.

While cost savings is a major reason for consolidation, decreasing enrollment is another. The top two reasons enrollment numbers have decreased in the past few years, Murray says, are charter schools and families who leave the city or district.

Three charter schools are now operating in Jackson, and 514 students left JPS to attend them, data from the state's Charter School Authorizer Board show. The students take local ad-valorem funding with them, to the tune of $1.4 million, Murray says, a cost that will increase for the district as the charters continue to grow their student populations.

These local dollars stay at the charter school even if the child returns to JPS mid-year. School districts don't have to pay those funds to charters until Jan. 16 of the current school fiscal-year.

Mississippi's charter-school law says charters receive Mississippi Adequate Education Program, or MAEP, dollars from the Mississippi Department of Education, based on average daily attendance just like other school districts around the state.

Next year, ReImagine Prep and Smilow Prep both plan to grow and add grades to their schools, meaning more students will likely leave Jackson Public Schools, which will have less local tax money to work with as a result.

Murray recognizes the need to find ways the district can save money going forward. He said no additional consolidations are in the works now, but that going forward, everything must be on the table.

The State of Mississippi is looking at substantial budget cuts for fiscal-year 2018, as well as re-writing the state's education-funding formula. MAEP was not exempt from Gov. Bryant's latest budget cuts either, which districts have to absorb before the current school year ends. How it all will affect JPS and other districts remains to be seen.

Either way, Murray says his staff will continue to evaluate data and follow the numbers to conserve and save. "We cannot maintain 60-plus aging buildings—we just can't afford it, so if you can't afford it you have to do something," Murray said.