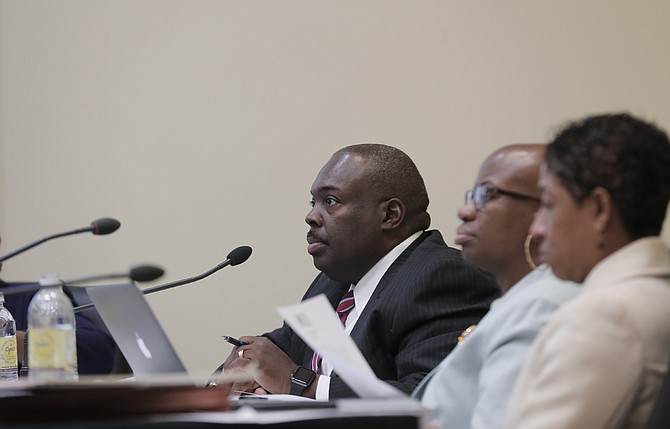 The Jackson Public Schools Board of Trustees approved the 2017-2018 school-year budget on Monday, June 26. The budget represents an almost 5-percent reduction from last school year. Photo by Imani Khayyam.

JACKSON — The Jackson Public Schools Board of Trustees approved a slim budget for the 2017-2018 school year on Monday night. The budget, which is about a 4.5 percent reduction from last school year, takes effect July 1.

Board members expressed support for applying for grants in order to offset the budget cuts. The district does not have a grant writer in-house, and Interim Superintendent Freddrick Murray said that few school districts do, but added that the district plans to focus on applying for pre-kindergarten grants.

"Much of our (grant-writing) efforts will be going toward pre-K because we believe in many cases that is the answer to a lot of our ills, so we will be aggressively looking at pre-K dollars," Murray told the board Monday night.

After the Legislature cut the Mississippi Adequate Education Program funds, school districts—especially large ones like JPS—have to deal with a budget reduction in the new school year. MAEP funds make up half of JPS revenue, and this year the school district received a $5.6-million cut to MAEP funds, Chief Financial Officer Sharolyn Miller said. 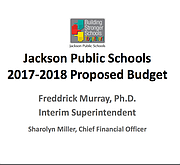 "We all know the very hard cuts that we've had and are likely to have in the future," Beneta Burt, president of the board, said while thanking Miller for presenting a balanced budget.

Miller told reporters later that the "challenging, streamlined" budget, while reduced, still focuses on instruction. The school board approved the $206-million budget Monday night. JPS should spend a little over 50 percent of its budget on instruction in the coming school year. Almost 25 percent of the school district's funds will go toward facilities and operations and debt service.

"We are hopeful we won't have any other reductions ... but right now we are contemplating no lay-offs or budget reductions in staffing," Miller told reporters Monday night.

The district faces many challenges that contribute to budget problems including a decline in student enrollment, charter schools attracting former JPS students and ad-valorem tax dollars away from the district, as well as transportation needs.

Miller said the district raised bus-driver wages to $14.15 an hour, as well as ordered 44 new buses.

"That's one of our priorities," she said. "That's one of the major places MDE will look ... to make sure our students get to school on time."

JPS will incorporate the new buses into routes for the coming school year, primarily to address the district's Corrective Action Plan. The Mississippi Department of Education is in the midst of auditing the district, and the CAP emphasizes the importance of having enough buses and drivers to adequately serve the students.

"If our students aren't to school on time, they can't learn," Miller said.