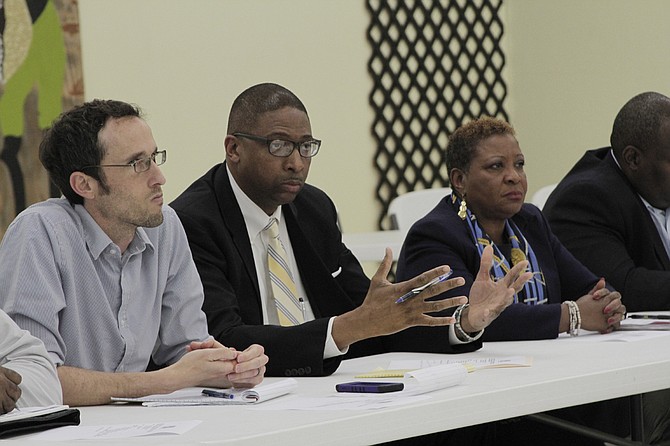 From left: JPS board members Jed Oppenheim, Rickey Jones and President Beneta Burt make up half of the JPS school board, which needs to fix several district policies before June 30 to keep the state from taking over the district. Photo by Arielle Dreher.

JACKSON — The Jackson Public School District has a lot of work to do ahead of the June 30 deadline set for some improvements outlined in its Corrective Action Plan, which the district needs to complete to keep its accreditation and avoid a state takeover.

The CAP details JPS violations of 22 of the 32 state accreditation standards, as well as how they can fix the problem with each standard and who is responsible. And while district staff can fix most of these standards, the JPS Board of Trustees is responsible for ensuring that policies—from graduation requirements to disciplinary procedures—are consistently applied throughout the district.

JPS is a large district, with almost 27,000 students, but the governance of the school district is supposed to be in line with state law that says the board has the authority to "determine(s) policy, delegate executive, supervisory and instructional authority to its employees."

The board recently hired an education consulting firm, The Bailey Education Group, to help it work through the CAP. Pat Ross with Bailey told board members at a work session last week that Standard 1, which addresses how discipline policies work district-wide, can be subjective because it deals with behavior issues in the classroom.

"Standard 1 is a lot about behavior, and sometimes behavior is subjective. That's why it's so difficult to do that type of audit," Ross told the Board on Thursday, May 4.

JPS will pay the Bailey Education Group $95,900 to work with the district through June 30 and help it hit the compliance deadline, the contract shows. Ross, the lead consultant on the project, has experience with working on corrective action plans, the contract shows.

The district has made progress on certain parts of the CAP. The Mississippi Department of Education found that under former Superintendent Cedrick Gray's tenure, his administration "fail(ed) to ensure that a positive, safe and secure school climate exists for students where teachers and staff feel supported by the administration and are able to maintain order and control," one finding in the CAP says.

Part of the way JPS officials worked to fix this is they took a school climate survey in January to see how teachers and administrators felt about their working environment from safety to student behaviors. The challenges primarily fall in the realm of behavior problems on the part of both educators and children, from "students fight a lot at this school" to "students at my school have felt bullied, discriminated against or sexually harassed by other teachers."

Only 47 percent of teachers and staff who took the survey submitted positive responses when asked about safety and respect in the district. 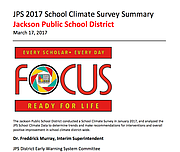 The survey also found that some JPS teachers are held to different standards than others, an issue that ironing out the district's policies could help.

Interim Superintendent Freddrick Murray, who inherited the CAP when he was appointed after Gray's departure, reminded the board that the changes are a work-in-progress—and that some of the systems have been the same way for decades.

"We're building a good product. ... We are holding people accountable. There are some people who will not be at the table: teachers, administrators, executive level (positions). We're having to make some decisions, and we're not afraid to do that," Murray said Thursday at a CAP work session meeting, implying that some district staff would likely not return in the 2017-2018 school year.

JPS board members are all mayoral appointees, who the Jackson City Council approves. Their terms are supposed to be staggered so that a spot on the board opens up each year. Board President Beneta Burt's term ends June 30, meaning the incoming mayor of Jackson could appoint a new member to the board or re-appoint Burt in the midst of the district's looming audit and takeover.

Board members serve for five-year terms. The next board member to complete his term is Jed Oppenheim, the only member appointed by the late Chokwe Lumumba. His term ends June 1, 2018. Other board members will serve terms ending from 2019 to 2021.

Lumumba won the Democratic primary election for mayor last week and will face Republican Jason Wells as well as several independent candidates in the general election on June 6.