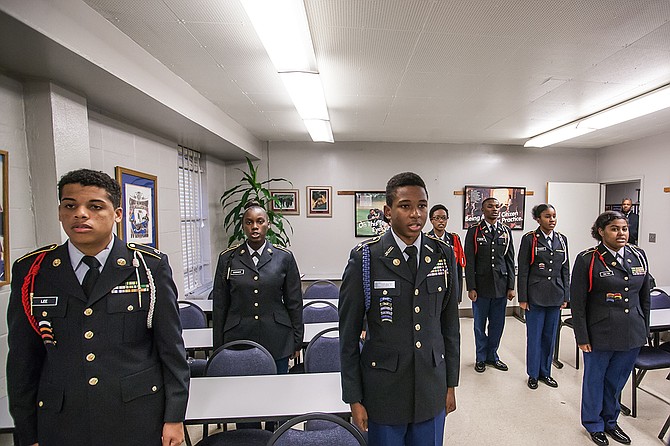 Willie Day, a senior at Callaway High School, just got his acceptance letter in the mail. "I think I'm going to Hinds Community College. I'm going for graphic design," he said.

Michael Lawrence, a senior at Jim Hill High School is applying to the Air Force Academy.

"I am going to major in civil engineering, and I want to be a pilot in the Air Force," he said.

Aitiana Sulton, a senior at Provine High School, loves to write. "I would like to attend Belhaven University to get my doctorate's degree in psychology," she said.

The three students are Jackson Public Schools JROTC cadets. A group of about 30 juniors and senior cadets from all seven JPS high schools raised their hands when asked if they plan to go to college. Some hope to go straight into the armed forces and attend college later. Others have no plans to join the military—but can readily acknowledge the life skills and exposure the JROTC program brought to their lives.

"Everyone else has inspirational stories, but the only reason I joined JROTC is because I didn't want to take PE," Kelsee Ford, a senior at Murrah High School, joked. "JROTC gives you the option of not taking it, and then I got on drill team and loved it."

"I have gained three fathers and three mentors that are helping me get to college," she added.

Other cadets agreed. JROTC is an elective option for all high-school students enrolled in JPS high schools. There are no requirements to get into the program, but students must keep their grades up to stay in it. Because the curriculum is not JPS but JROTC-based, students who join freshman year have the best chance at finishing the courses on-time. If a sophomore or junior decides to join, he is or she has to start at level one with the freshmen. Students can receive credit for required PE and health courses if they participate in the program long enough. Trips and community service often happen on the weekends. JPS JROTC students logged more than 50,000 hours of community service last school year.

Almost 25 percent of high-school students in JPS participate in the program. Col. Paul Willis, the director of the JROTC program, dispels a myth of the program immediately: it does not obligate students to join the Army or require any service in the military after they graduate.

Willis said his program really focuses on ensuring students go on to some institution of higher learning, including community colleges, vocational and trade schools.

The push to get students to college appears to be working. Last year, JROTC students received $6.7 million in scholarships—a record year for the program. Students in the JROTC program get a look inside several colleges and universities around the state during their time in the program. The JPS JROTC started a partnership with Mississippi State University in 2011 for 60 students to live on campus and learn about engineering, geoscience and other STEM-related careers for a week during the summer. That program is one of several summer programs JROTC cadets can attend including overnight experiences at William Carey University and the Jackson Police Department as well as a daytime program at Jackson State University.

The U.S. Army and the school district both fund JROTC. In 2013, Willis said, the Army began scaling back the program, not allowing schools districts to re-hire instructors who left. The goal was to get each school down to two instructors, which means accommodating less students. Two teachers can accommodate about 150 students.

When the Army scaled back funding, the school district stepped in.

In an ideal world, Willis would have 30 instructors and be able to pay them year-round instead of on a 10-month contract as they are now. The number of JROTC students has dropped in past years as a result of the budget cuts from both sides. In 2013, 2,293 students were enrolled. Today, 1,701 students are in the program.

The 10-month contract means instructors often take students on trips off the clock, like when 100 students went to the National Flight Academy last summer in Pensacola, Fla. Willis said his instructors were not technically on contract at the time—but everyone knows it is worth the time. "We know that these things are necessary for our students' development. We know based on the environment that we're in, we have to give them the exposure," Willis said.